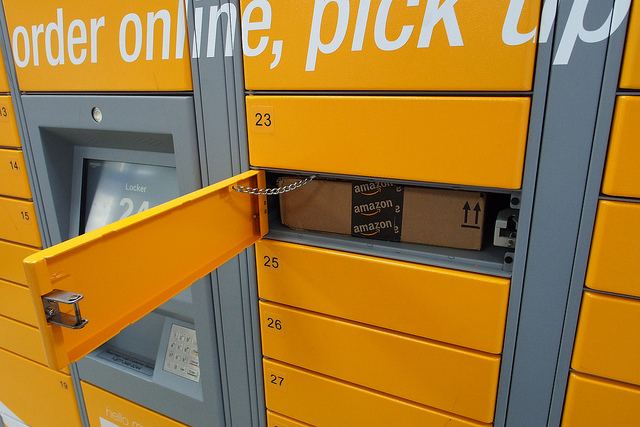 Ordering and returning items through Amazon (NASDAQ:AMZN) has become even speedier using a new system of lockers placed in urban centers; the system will allow customers to return unwanted merchandise purchased from the online retailer without having to ship the items back to Amazon.

The company has been installing the lockers in public locations that receive a lot of traffic, such as grocery stores, convenience stores, and garages in major metropolitan areas; and while the service makes returns easier for urban customers, it also addresses a major concern of online retailers — paying for shipping in both directions, especially given that more than a third of online purchases are eventually returned.

Customers in urban centers like the service because of it’s convenience, an Amazon spokesperson told The Wall Street Journal. Amazon’s deliveries using the locker system are fairly simple. The company emails its customers a locker number, along with a code to open it, and then customers have two or three business days to retrieve their items from the cabinets.

Returns work the same way; Amazon sends a code via email to the customer who can then use that code to open a specific cabinet and deposit the merchandise to be returned. The system saves Amazon money because the carriers don’t need to go out of their way to pick up returned merchandise; they’re already visiting the locker sites for drop offs.

Packaging and shipping returned orders is a major expense for Amazon, The Wall Street Journal reports; the company spent $8.59 billion in order fulfillment in 2013, compared with $6.42 billion a year previous — a more than 30 percent increase in just a year. While the locker system seems like new innovation, Amazon has actually been quietly installing the units in metropolitan areas for several years now, and the cabinets help give urban customers’ peace of mind that their items will be returned successfully even while they’re at work.

Interestingly, Google (NASDAQ:GOOG) (NASDAQ:GOOGL) formerly operated a similar system. The company acquired the Canadian company BufferBox — which utilizes similar lockers — in 2012, though it announced earlier this year that it plans to shut down the service altogether. Perhaps Amazon will have better success?