American Households Are Smaller and Lonelier Than Ever Before 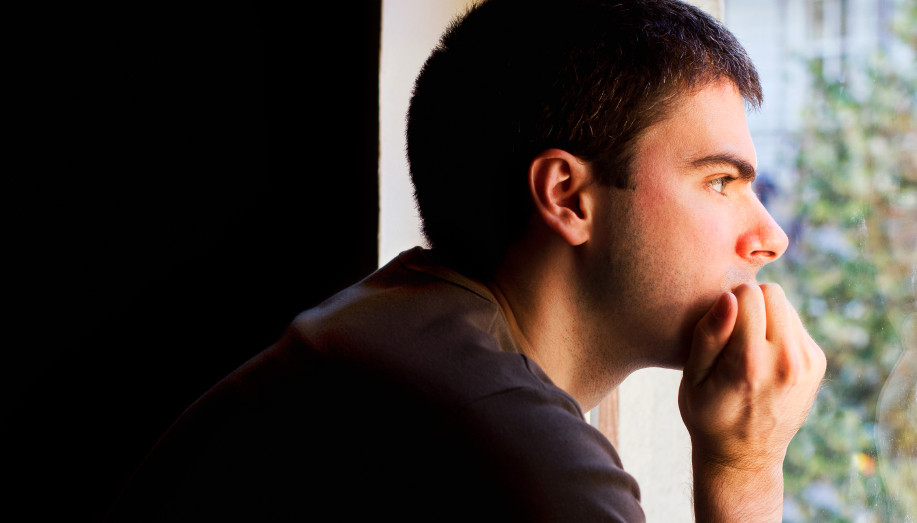 American demographics have undergone some huge changes over the past few generations. A century ago — or a half-century, even — America was home to many large nuclear families, with lots of children all living under one roof. That is still very much the case for many people, though having more than a few kids is probably going to be a lot less common than it once was. Households in the United States have shrunk, there’s no doubt, and according to new data, it appears we’re more likely to be living alone than at any time in the recent past.

A recent letter from the Federal Reserve Bank of Kansas City has highlighted a few major shifts millennials are experiencing that differ greatly from previous generations. A few of these have been covered, fairly extensively, before — most notably, the fact that a hearty percentage of younger adults are still living with their parents, and for longer periods of time.

Here’s a graph that showcases that very phenomenon: 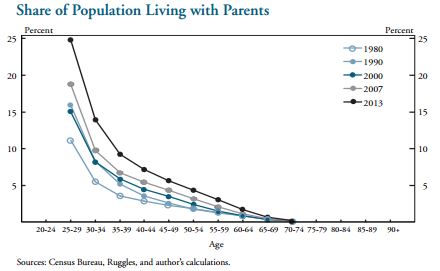 In addition to that, there have been major swings in marriage rates. This, again, is something that has been discussed at length, and it seems as though economic factors are mostly to blame. Naturally, lower rates of marriage — or at least delaying marriage until later in life — has had an effect on birth rates. A couple of the biggest factors playing into this has been the fact that education costs have gone through the roof over the past 30 or so years, resulting in astounding levels of student debt, and the most recent economic woes that have set many millennials back in the ‘growing up’ process, so to speak.

Here is a chart showing the differences in marriage rates and ages: 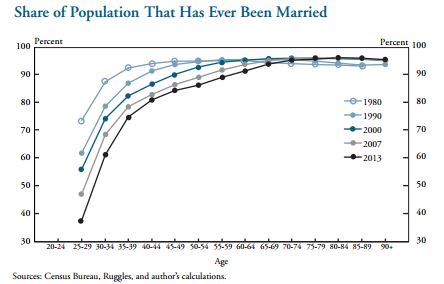 Perhaps the biggest shift, and the least-discussed, is the changing makeup of what U.S. households actually look like — that is, how people are living, and with whom. Here’s the Fed’s chart: 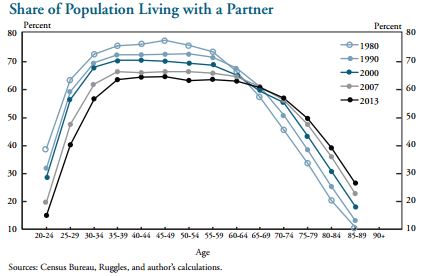 What we’re seeing is that people are obviously less likely to be living with a romantic partner than ever — unless they’re older — than at any point in the past 35 years.

This reveals an interesting, yet curious dichotomy at play in the economy. Younger adults are eschewing marriage and having children due to certain economic circumstances, in all likelihood to give themselves time to put their finances in order. Yet, they’re increasingly living alone — or at least with someone other than a romantic partner. It’s not all that uncommon to see individuals in their late 20s and 30s to be living with roommates, in order to provide additional financial padding.

What does all of this mean? In short, we, as a society, are lonelier than ever. Except for senior citizens.

There are a number of reasons for this, as well. For one, divorce is fairly common, which plays a part in the larger number of single-adult households. More and more people are simply not getting married in the first place, which was probably frowned upon in preceding generations, but now isn’t typically a big deal. Lots of people lead fulfilling lives embracing their single lives — just look at how long George Clooney held out before tying the knot.

So, if you’re feeling lonely, don’t worry about it. You’re not alone. In fact, you’re part of an interesting economic and sociological trend that has been decades in the making. Add on to that the fact that some bigger things have been at work in the economy, like the Great Recession and unprecedented levels of student debt. While some may see themselves getting older and start to feel a mild sense of panic about the future, particularly as it relates to coupling off and starting a family, the numbers show that this may, in fact, be the new norm.

Feelings aside about these trends, it’s definitely interesting to see the effects of an economic downturn, along with larger student debt, on the overall population. Interesting — though maybe not necessarily heartwarming.