American Public: Confused as Ever About Obamacare

Politicians may be making a lot of noise about the implementation of the health care reform. From Texas Senator Ted Cruz’s campaign to defund the federal government if funding for Obamacare implementation is included in the spending bill to President Obama’s civil rights-themed radio appeal to Americans to sign up for coverage via the exchanges.

But new research conducted by the Kaiser Family Foundation indicates that the “public’s most trusted sources of information on the law are not necessarily the ones people are most likely to be hearing from.” Yet, the news media, with its great reach, was still found to be the most common source for news on the Affordable Care Act.

Despite the increased publicity Obamacare has received, with the Obama administration intensifying efforts to educate the public about the law’s benefits and the growing number of attempts congressional Republicans have launched to defund or repeal the legislation, Kaiser’s August health tracking poll revealed public opinion and public knowledge of the bill’s ramifications has remained little changed in recent months.

1. Doctors and Nurses and Federal and State Agencies are the Most Trusted Sources of Information on the Affordable Care Act:

One of the expressed purposes of Kaiser’s August poll was to determine where the public is turning for information about Obamacare. When asked what source of information they deemed most trustworthy, the most common answer given by respondents was their doctor or nurse. Of those polled, 44 percent gave that answer, while 34 percent chose federal agencies and 33 percent chose state agencies.

A medical professional may seem a likely choice for information regarding the Affordable Care Act — but other surveys have found that a large number individuals in the medical field may also need more information.

LocumTenens.com, a full-service physician staffing agency, found that among a sample of 479 independent physicians a great number said they were “not  at all familiar” with the particulars of the Obamacare-mandated online marketplaces, including the types of plans offered on the exchanges and other key details.

But, while only 8 percent said the news media was a trustworthy source, a great majority — 81 percent — of respondents said they were mostly likely to get information about the law from the news media. This compares with the April poll, which found that the most commonly cited source of information was friends and family, named by 40 percent of respondents. 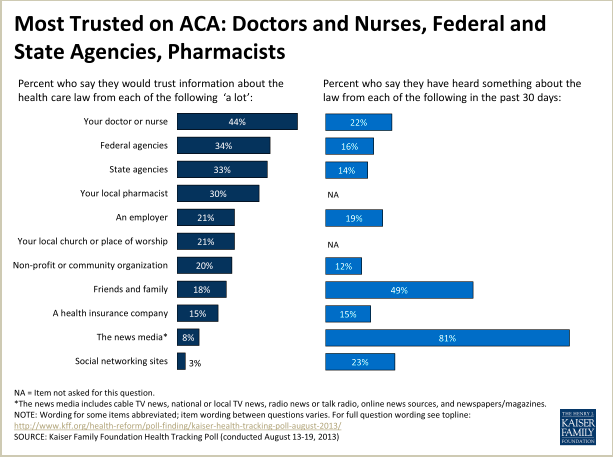 The fact that young people are more likely to trust “official sources” is good news for the health care reform. Young people, who often go without insurance for the simple reason that it seems to be an unnecessary expense at a time in life when money is short and health problems are rare, have been a particularly important target of the Obama administration’s educational efforts.

The very reason that they tend to remain uninsured, despite their overall good health, makes young adults essential to the successful operation of the exchanges. According to estimates made by the Obama administration, approximately 7 million people will sign up for coverage via the exchanges in 2014 and between 2.6 million and 2.7 million of those enrollees need to be young, cheap-to-insure, Americans for the system to work.

Their insurance premiums will cover the big bills for the relatively small number of sick people that are expected to sign up relatively quickly via the exchanges.

3. Over a Third Report Actively Seeking Information on the Affordable Care Act:

The Obama administration is aware of widespread confusion over the provisions of the health care, and despite the efforts to spread awareness undertaken by advocacy groups and officials from the Department of Health and Human Services, Kaiser has found that push has not prompted a great majority of Americans to actively seek out information about the reform. 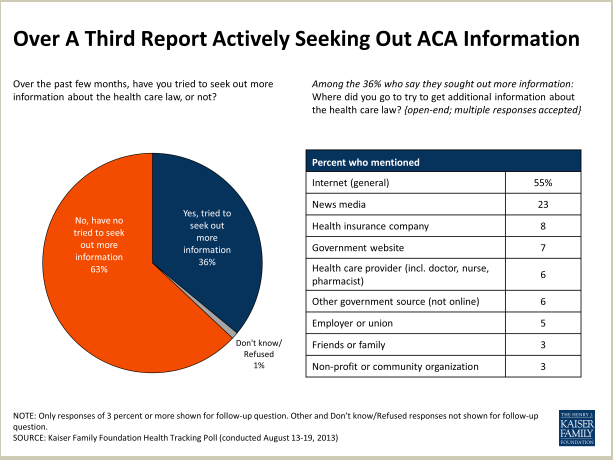 Ever since President Barack Obama signed the Affordable Care Act into law in March 2010, the complexities of the health care reform have drawn criticism, and even supporters winced at the length of the document. They have also created a huge stumbling block for government in its efforts to implement the piece of legislation that has become known as Obamacare.

According to Brookings, the complexity of the reform is a natural byproduct of the nature of the United States’ federal structure. Government complexity also comes with the territory because the United States has “a long history of relying on private sector markets and resorting to government regulation and provision of services only where markets fail.” But while complexity may be natural, confusion is not.

Even though the exchanges are scheduled to open for enrollment in just over one month, roughly half the public — 51 percent — continues to say they don’t have enough information about Obamacare to understand how it will impact them and their family, a percentage that has been fairly steady since the law was passed in 2010. Those that do not believe they have enough information are particularly high among Hispanics, 64 percent, the uninsured, 62 percent, young adults, 62 percent of those ages 18-25, and those with lower incomes, 60 percent of those with family incomes less than $40,000 a year. As in April: 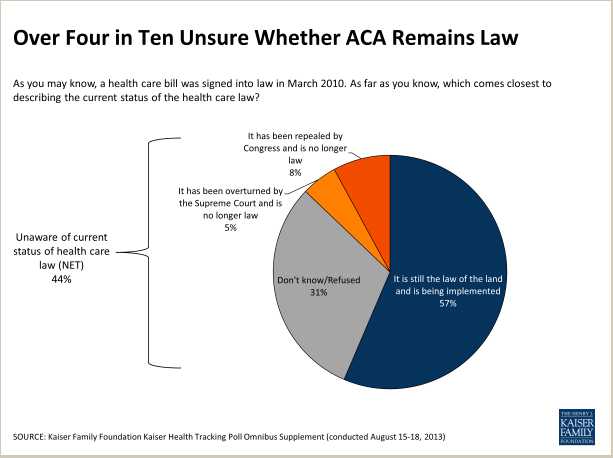 5. Opinion on Obamacare Continues to Tilt Negative, But Majority Disapproves Of Defunding:

Since February, public opinion regarding the Affordable Care Act has remained unchanging. 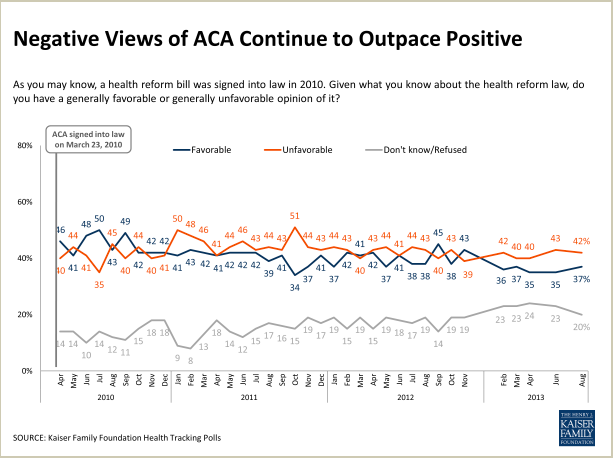 Still, 57 percent say they disapprove of cutting off funding for the implementation of the health care reform. Of those that say defunding is not the right option, 69 percent said it was because “using the budget process to stop a law is not the way our government should work,” while 56 percent said defunding would cripple the law, which is not good for supporters or opponents.

An additional 49 percent said the health care law will be a good thing for the country and should be implemented as written. It should be noted that respondents could choose more than one reason for their disapproval of defunding Obamacare.

Here’s how the major U.S. indexes traded on Thursday:

Don’t Miss: Another Obamacare Delay, But Officials Brush It Off.