One of America’s oldest shopping malls announced in late February it would be closing in the upcoming months, reminding the country that even the sentimentality of spending teenage years roaming between stores isn’t enough to save the behemoth buildings from closing their doors. Malls aren’t dead everywhere, even in the United States. But the growing number of faltering malls makes the future look grim, especially for those anchored by stores that are also struggling.

On February 26, The Detroit Free Press reported that a judge had authorized the closure of Northland Center mall in Southfield, Mich., which is the nation’s first regional shopping mall. The mall is estimated to be losing $250,000 per month, a figure that will likely get even more grim after the mall’s only remaining anchor store, Macy’s, closes this month. Northland is just one of several malls to close in the last decade or so, and the number of unhealthy malls is growing, according to The New York Times. About 80% of the country’s 1,200 malls are considered healthy, reporting vacancy rates of 10% or less. But that’s a drop from 94% healthy in 2006, the Times reported.

A few factors play into why some malls are struggling, and why that number of flailing buildings is growing. The first is because teens no longer view shopping malls as the mecca for hanging out and purchasing clothing or other items. A semi-annual study by investment firm Piper Jaffray suggested in early 2014 that teen traffic to malls has declined about 30% over the past decade. The number of trips to the mall per year for teens dropped from a peak of 38 to what the firm said was an all-time low of 28 trips in the fall of 2013. That barely picked up in the fall of 2014, with an average of 29 trips. The firm suspects the main reason for the decline is that teens are more likely to use mobile devices to order clothes and accessories online. Its survey of about 7,500 teens every six months shows that mobile purchasing is on the rise, at least among the teenage demographic. 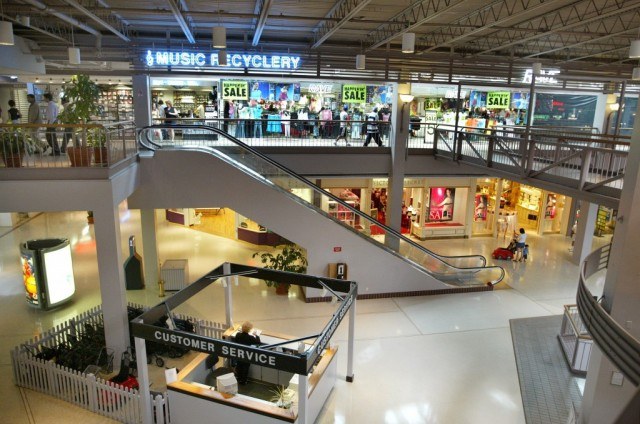 But online shopping, though often blamed for the decline of mall traffic, only makes up about 10% of retail sales, the Times reports. And most of those sales affect big box stores more than specialty retailers in malls. Instead, the Times blamed the issue on the concentration of stores in populated areas. For instance, in the greater Detroit area where the Macy’s is closing inside the Northland mall, there are eight other Macy’s stores within about a 30-minute drive. The Times wrote that “… the fundamental problem for malls is a glut of stores in many parts of the country, the result of a long boom in building retail space of all kinds.”

But the larger indicator for whether or not malls will survive the next decade has much more to do with the quality of their anchor stores. Fortune points out that, much like the income disparity, there’s a growing gap between affluent malls and their downtrodden counterparts. Malls are graded on a letter scale from “A” to “D,” and there’s a huge difference between the revenue for each type. One A++ mall that Fortune cites, for example, increased its revenue to $945 per square foot in 2014, up from $900 the year before.

That building, Roosevelt Field in Long Island, includes Nordstrom, J.C. Penney, Bloomingdale’s, Macy’s, and Neiman Marcus is expected to open soon. Malls with an “A” rating rose about $20 in 2014. But sales in “B” and “C” malls were down, with the overall “C” revenue down $5 to $240 per square foot. Many of those include anchor stores that have also experienced pitfalls and store closings, including a majority of J.C. Penney stores and Sears. J. C. Penney announced it will close another 40 stores this year, pulling out of many of the malls that are already struggling. Though that’s argued to be good for the company’s profits, it likely won’t do anything to boost the malls they’re leaving.

“It’s circular,” said D.J. Busch, a senior analyst at Green Street who spoke to Fortune. “As malls get more productive, they are more in demand from new, growing retailers so it’s a virtuous cycle. Conversely for lower B or C malls, as they lose tenants, it’s harder to find quality replacements.” Though high-grossing stores such as Apple will continue to increase mall profits in the coming years by a few percentage points, it won’t be enough to save them all. Busch expects about 15% of malls in the United States, or around 200 locations, to close within the next 10 years.