The Crazy Amount of Money the Military Gives to the NFL 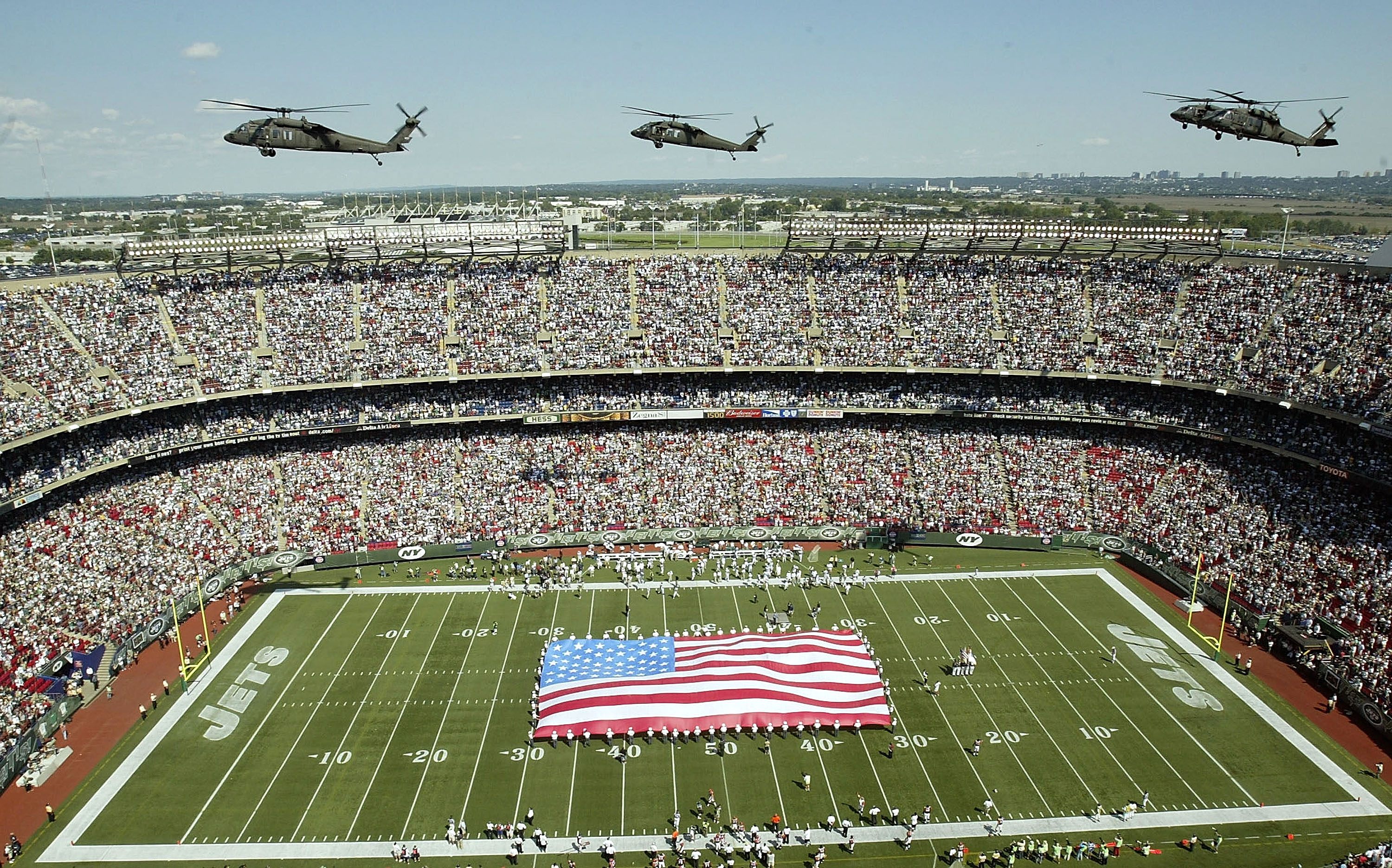 The Department of Defense pays the NFL for these displays. | Elsa/Getty Images

The NFL and the military are like two peas in a pod in a number of ways. From the “battle” themes to the uniforms, professional football is rife with militaristic themes. Like Roman gladiators, when NFL players take the field we get to see them duke it out in the heat of competition. They go to battle, and a victor is crowned after using plenty of strategic planning and brute force.

And the players and team owners are rewarded handsomely, of course — much more so than your average soldier. But that’s a different story.

Controversies involving the national anthem and player protests are dominating the conversation when it comes to the NFL. While the national anthem protest started with Colin Kaepernick’s attempt to bring attention to police violence and racial issues, President Donald Trump has hijacked it and made it about something else entirely. In his eyes, taking a knee during the anthem is a slap in the face to the military, veterans, and the country at large.

Although it’ll be some time before all of that gets sorted out, we can look back at another curious way in which the NFL and military have interwoven themselves. If you remember a couple of years ago, it was revealed that the Department of Defense was paying the NFL for patriotic displays at the taxpayers’ expense. This was surprising to many people who figured the NFL was probably more than happy to eat the costs to honor veterans, find tickets for soldiers, and host flyovers before games.

As it turns out, the league was not eating those costs. It was more of a marketing stunt than anything else. Given the controversy surrounding the troops, the national anthem, and the NFL, it’s a good time to look back at the revelations concerning the Department of Defense and the NFL — and dig into how much money was involved.

If you missed the whole controversy the first time around, you might be surprised at just how much of your tax dollars were spent on marketing for the military. As a teaser, the total was more than $5 million in just a three-year span. Here’s how the numbers break down between the NFL and the military.

The NFL and the military: A short history 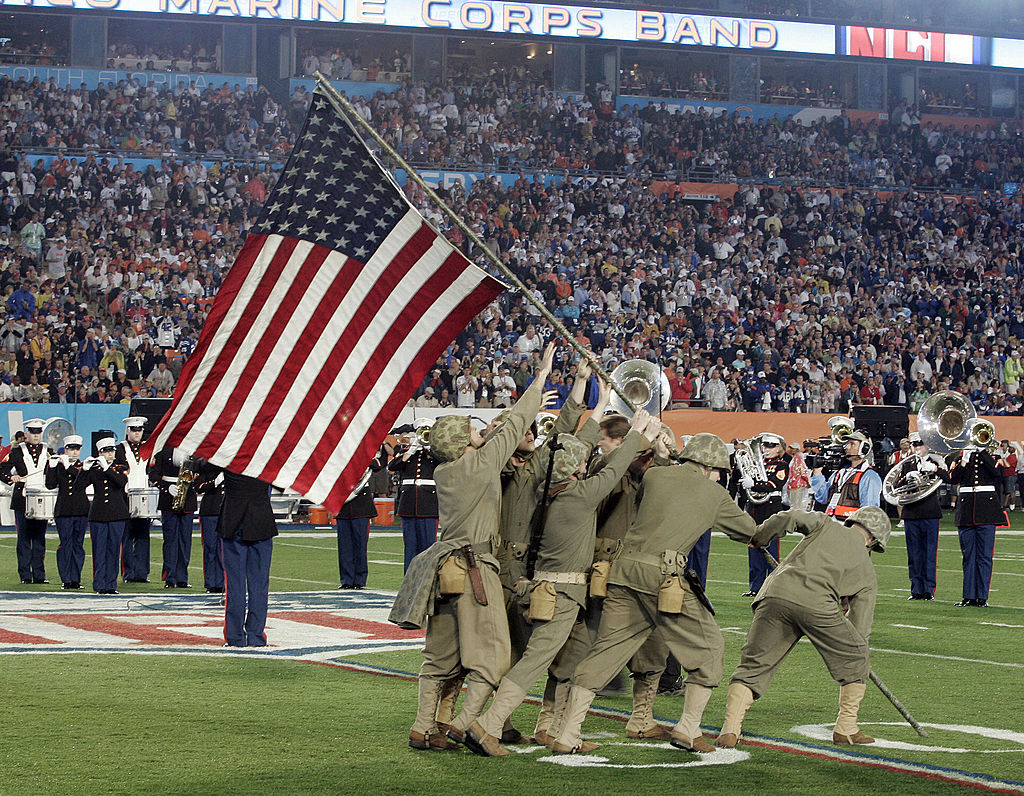 The Department of Defense spends big bucks to partner with the NFL. | Jeff Haynes/AFP/Getty Images

Again, the NFL and military are not strangers. There have seemingly always been soldiers at the games to take part in the singing of the national anthem or in some other capacity. But it’s relatively recent that the NFL has been raking in big bucks to do it. According to NJ.com, the Department of Defense had “paid at least $6 million in taxpayer money” to the NFL. This report, which was published in May 2015, was based on government records.

Next: How much, exactly, are we talking about? And which teams got a cut?

How much money does the NFL receive?

Over $5 million was spent on the NFL. | Nick Laham/Getty Images

The initial report mentions at least $6 million between 2011 and 2014 being shoveled from the Department of Defense to the NFL. The same report says 16 different teams got a cut of the proceeds. Further reporting revised the overall amount to $5.4 million split between 14 teams (that were verified), according to PBS. Of that $5.4 million, the bulk of it was spent by the National Guard, and the remaining amount by the Army and Air Force.

After this news broke, elected officials started to speak up. Sen. Jeff Flake of Arizona, for example, called it an “egregious and unnecessary waste of taxpayer dollars,” PBS reports.

Next: How those taxpayer dollars were put to use during NFL games. 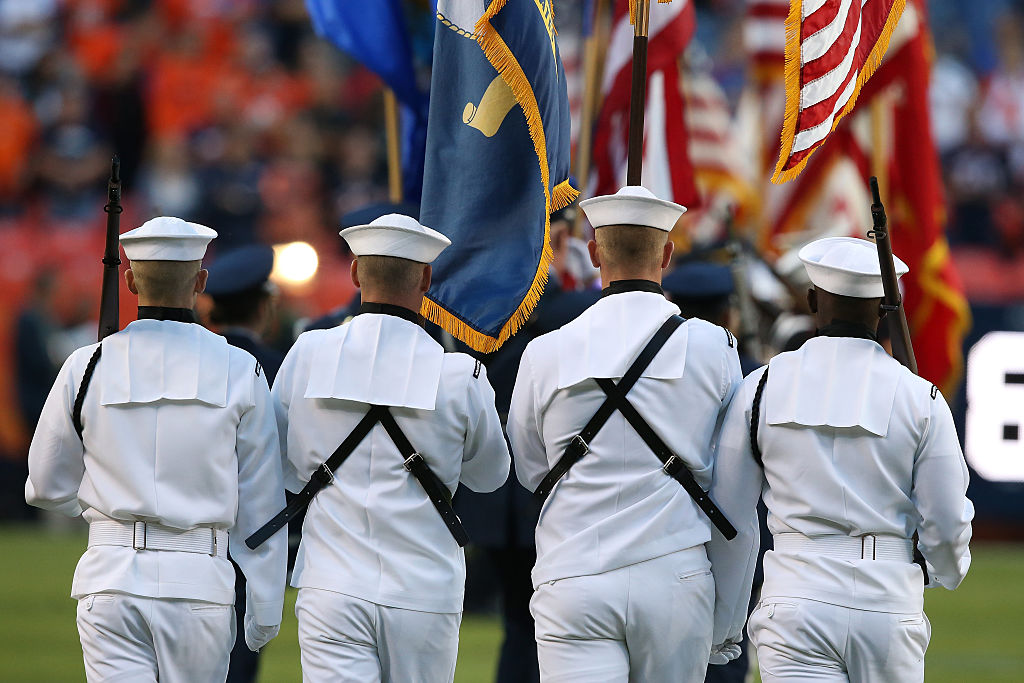 This is a common display at many games. | Doug Pensinger/Getty Images

We don’t have a breakdown of how, exactly, NFL teams are putting the Department of Defense money to use. But undoubtedly some of it goes toward pregame ceremonies, including the singing of the national anthem. It’s not unusual, for example, for the field to be almost completely covered by a giant American flag held by military personnel. It’s also not unusual for members of the military to be singled out and honored before or during games, as a “salute to service.”

Next: All of that, though, is relatively cheap compared to an Air Force flyover. 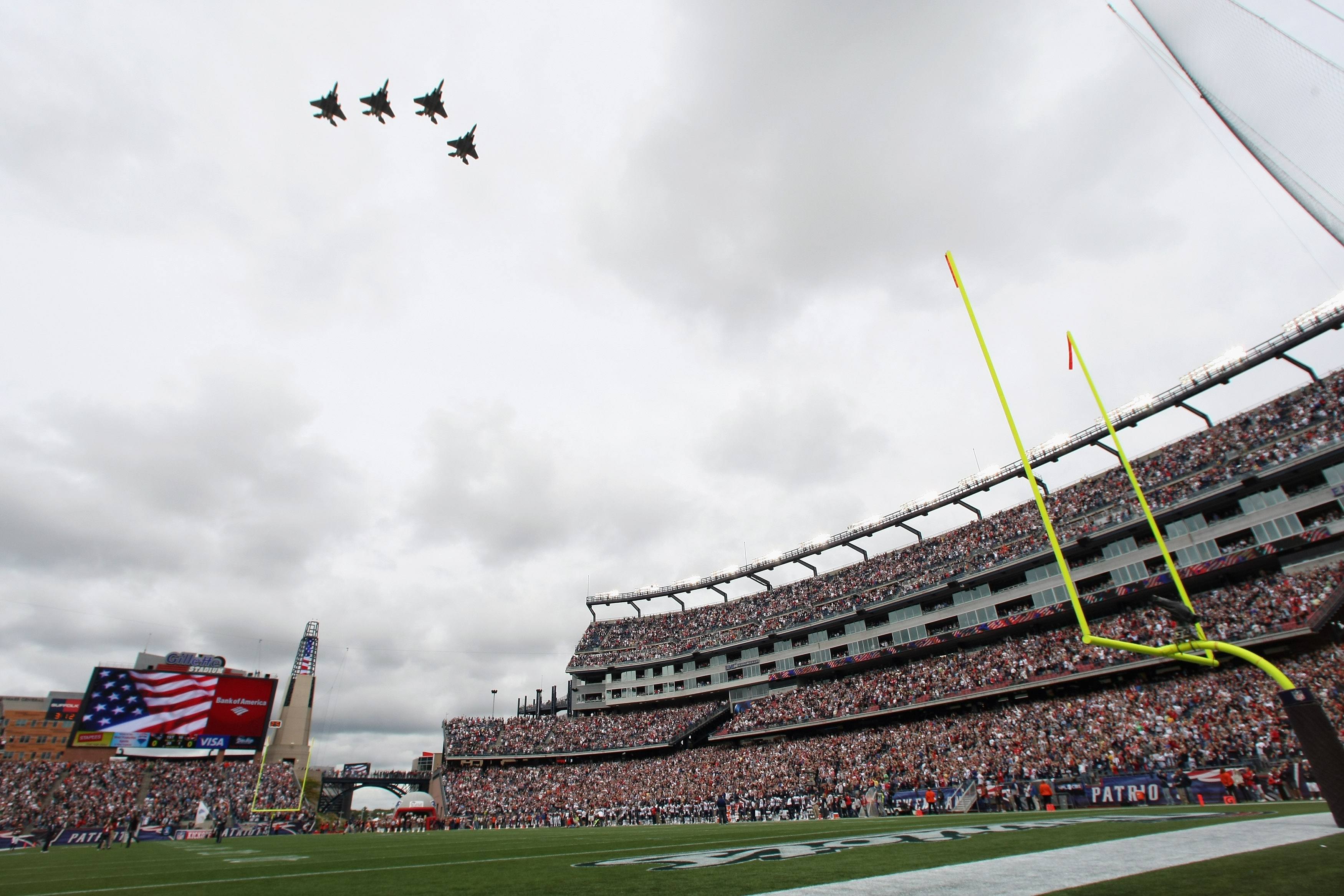 These jets cost a lot of money. | Elsa/Getty Images

We’ve also become accustomed to seeing military jets fly over stadiums before games. According to the Washington Times, the military takes part in these flyovers roughly 1,000 times per year. And the costs can tally up to more than $10,000 per hour. But that’s more or less an estimate, and the costs can actually be much higher than that. In one case, four F-18s flew over Cowboys Stadium at the 2011 Super Bowl. The stadium has a roof, so fans had to see it on the big screen rather than having a direct line of sight. But it appears that single flyover could have cost the taxpayers as much as $450,000.

Next: The money also goes toward getting service members into the seats.

Tickets and saluting the soldiers 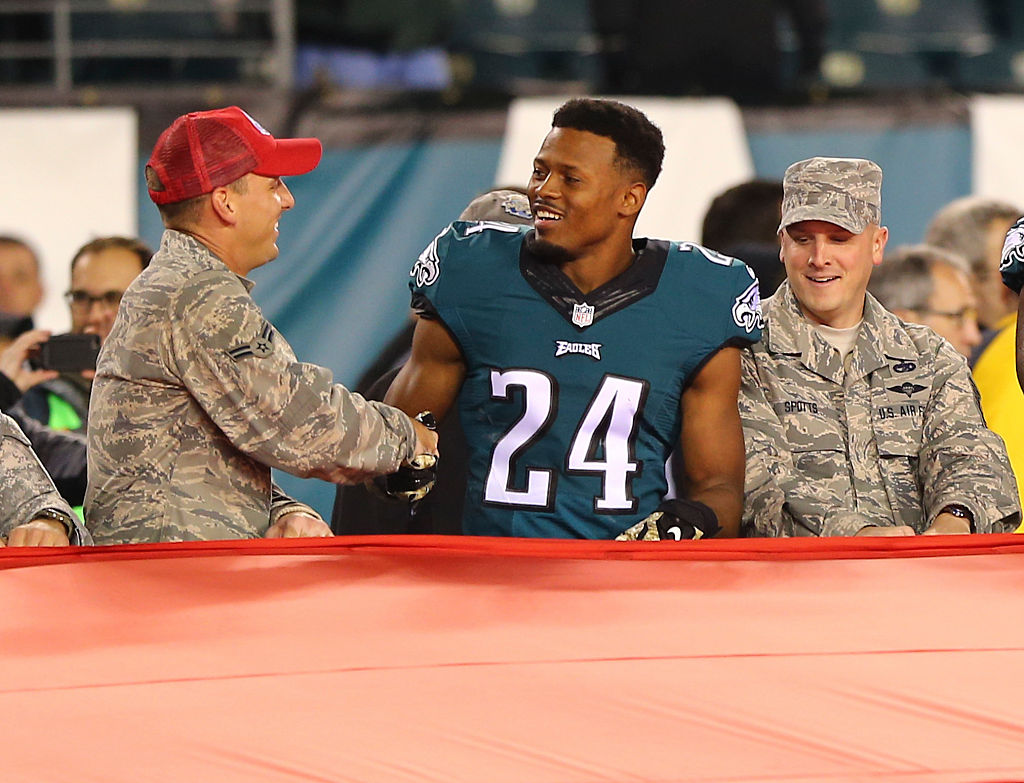 While flyovers are going to eat up a huge amount of resources, getting service members to the games isn’t cheap either. Again, we don’t have exact numbers on this, but game tickets, premium seats, and skyboxes aren’t free. Most people likely assumed the NFL was welcoming soldiers to the games — and not being paid to do so.

One team, the New York Jets, received hundreds of thousands of dollars to include a segment called Hometown Heroes. The program gave soldiers and their families tickets and also put them on the Jumbotron. It’s a nice gesture, sure. But it’s the fact that the team was being paid for it that didn’t sit right with a lot of people.

Next: Before you think it’s just the NFL, let’s take a look at the other leagues taking Department of Defense money.

It’s not just the NFL 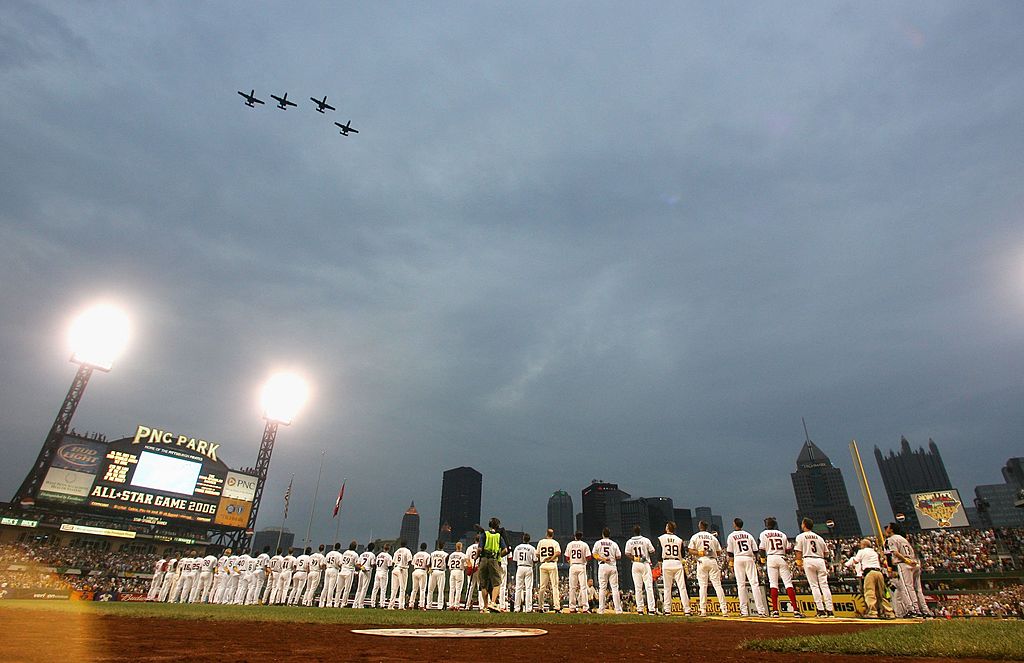 According to SBNation, the biggest sports leagues in the United States have received more than $10 million from the Department of Defense for patriotic displays. That includes the NFL, MLB, NHL, MLS, and NBA. SBNation also notes the figure doesn’t include NASCAR — perhaps America’s most popular sport. Further reporting from The Washington Post found NASCAR was actually the biggest recipient of Department of Defense money. The stock car racing governing body received more than $1.5 million in 2015 alone.

Next: With millions of your tax dollars being spent, what’s the bottom line? 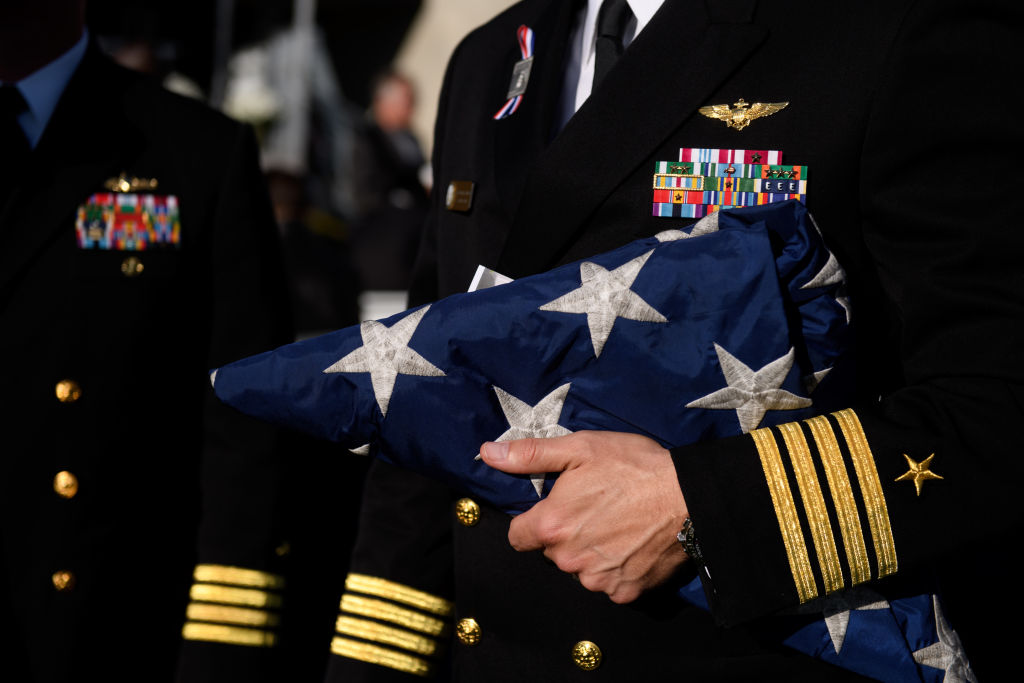 At the end of the day, it’s about recruiting. The military is giving sports leagues money to advertise. The military needs fresh recruits every year, and it’s putting money where the eyeballs are: sports. In 2016, more than 16 million people would watch the average NFL game. That’s a big audience. And a lot of those viewers are young and gauging their career interests — a jackpot for military recruiters.

To be fair, the NFL did return some of the money it received from the military after the public learned what was going on. It’s also not illegal or necessarily unethical for it to have received money in the first place. But you should know looks can be deceiving — especially all of that camouflage.