Are American Millennials Falling Behind?

For all intents and purposes, the millennial generation is the future of America. People born after 1980 and who are now between the ages of 16 and 34 are finishing school, entering the workforce, and preparing to inherit the positions of their predecessors in business, politics, and all other areas of life. But to add to the accusations that millennials are a self-absorbed, meme-obsessed generation, a new study suggests that they may be falling even further behind in terms of global competency.

The study, released by testing giant ETS, used data from the Programme for the International Assessment of Adult Competencies (PIAAC) to compare how American workers performed following their education, compared to people from 21 other participating countries. Their results found a paradox: millennials might be putting a greater emphasis on education, but their performance is not adequate to remain competitive in a global environment. “Millennials may be on track to be our most educated generation ever, but they consistently score below many of their international peers in literacy, numeracy, and problem solving in technology-rich environments,” the report says in its summary.

During 2012, when much of the data for the report was collected, millennials made up 26.2% of the U.S. population and 35% of the civilian non-institutional workforce. The report, released in February 2015, broke out data pertaining to that group of people tested because, in their words, “This generation of American workers and citizens will largely determine the shape of the American economic and social landscape of the future.”

The report is not brimming with good news. In literacy, for example, U.S. millennials scored lower than 15 of the 22 participating countries. In numeracy, the U.S. scored dead last, tied with Italy and Spain. In terms of problem solving, U.S. millennials scored 18th out of 20 scores recorded, ahead of only Ireland and Poland. The very youngest of the group, from ages 16 to 24 and who could be in the workforce until at least 2065, ranked “dead last” in numeracy and among the bottom in problem solving. 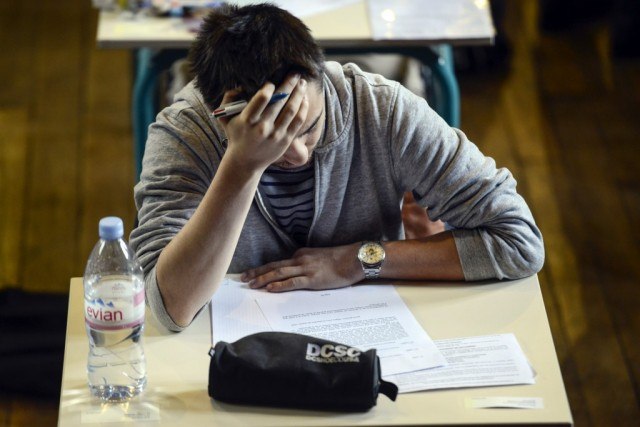 The findings of low achievement aren’t in a vacuum. According to a survey of 126 CEOs in America that was released in December 2014, the skills gap is a problem for 97% of the respondents. The study, which focused primarily on the need for knowledge in Science, Technology, Engineering, and Math fields (or STEM), said the gap “is real and is a significant problem.” Of the respondents, 28% said at least half of their new hires lack basic STEM literacy, which makes sense if they’re also scoring low on the numeracy and problem solving aspects of the PIAAC tests.

STEM employment from 2000 to 2013 has increased by 30% in the United States, according to reporting by U.S. News & World Report. But there have only been “modest gains” in STEM activity over that time, suggesting that “the existing pool of talent is still too shallow to adequately meet demand.” 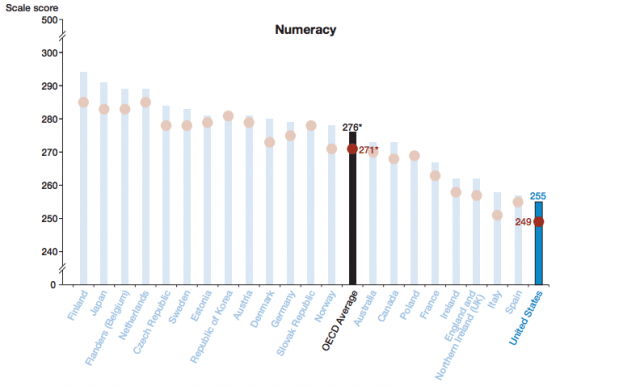 The authors of the ETS report are not optimistic about what this means for the nation’s future. “The comparatively low skill level of U.S. millennials is likely to test our international competitiveness over the coming decades,” the report says. “If our future rests in part on the skills of this cohort—as these individuals represent the workforce, parents, educators, and our political bedrock—then that future looks bleak.”

And it’s not just that American students have stayed at the same level while students in other countries have gotten smarter. The report shows that American performance on these types of tests has decreased, a trend the report calls “clear cause for concern.” The average score for U.S. adults in literacy has declined since 1994, and scores in numeracy have declined since 2003. Furthermore, the report breaks down the data further to show that even the nation’s top learners with the highest social and economic advantages still score lower than peers in other countries.

“You’ve seen tons of school-reform efforts in the last 20 years that don’t seem to be able to make a dent. Well, maybe we need to reframe the problem in a larger way,” Madeline Goodman, a co-author of the ETS report, told The Atlantic. “It’s a question of putting the problem of skills in a larger context of inequality and opportunity in America today.” 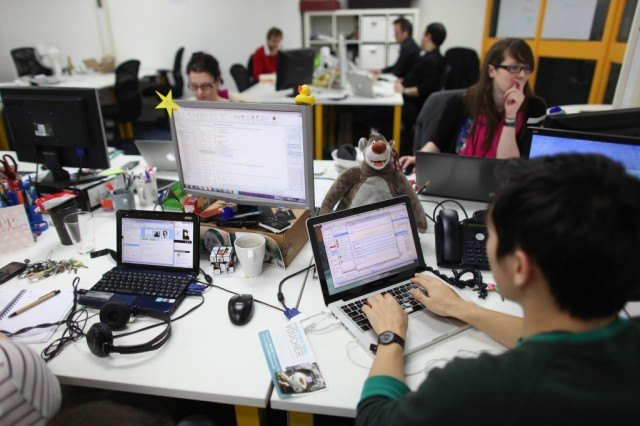 As the requirements in high-paying jobs increase, the abilities for a large swath of the American workforce to improve their economic and social standing may become more difficult, especially as they compete with job candidates from other countries. The focus must shift from attaining degrees and certificates to actually assessing which skills have been learned, the authors of the report content. “We have clearly not adapted nimbly to the challenges we face,” the report concludes. “Doing so now will require us to focus on policy changes; even more fundamentally, it will involve a renewed social commitment to alter our course. Skills or knowledge can either feed inequality in a society or be an equalizing force.”

However, focusing on the workers themselves, and not the systems around them, creates a dangerous precedent, columnist Paul Krugman wrote in May 2014. “…By blaming workers for their own plight, the skills myth shifts attention away from the spectacle of soaring profits and bonuses even as employment and wages stagnate,” he wrote for the New York Times. Krugman’s take on the matter instigated a hailstorm of responses from numerous organizations, including one from the U.S. Chamber of Commerce Foundation that stated the workforce, testing skills aside, has not been able to keep pace with the modernizing economy.

“At its core, the problem is a breakdown between supply and demand,” the rebuttal states. For decades, reform initiatives have sought to improve the education system. However, the results of such efforts haven’t done enough to improve graduation rates in high school or college completion rates—or even the effectiveness of workforce training programs.”

No matter who is to blame, the report and others agree the time is now to begin taking action to remedy the problem. In the words of the U.S. Chamber of Commerce Foundation: “What stands before us is an opportunity to rethink the role of employers in education programs, the type and value of credential offerings, and how students can be empowered with real and meaningful choice in pursuing a pathway to success.”