Are Americans Still Struggling to Save Money?

Although financial conditions have managed to recover from the credit meltdown with the help of the Federal Reserve, fewer than one in four Americans have enough savings to cover expenses for at least six months. 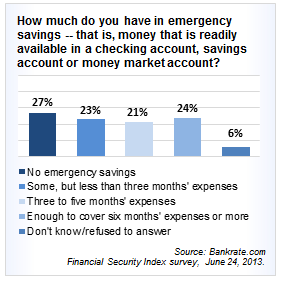 Between high unemployment rates and stagnant wages, many people in the country lack the funds to protect themselves from financial hardships. According to a new survey from Bankrate.com, only 24 percent of Americans have enough money set aside to cover expenses for half a year. Even worse, 50 percent of people polled do not have enough savings to last for three months, while 27 percent have no emergency savings at all. Twenty-three percent said they had some savings, but less than three months’ expenses.

Financial advisors often advocate an emergency savings fund of around eight to twelve months. The simple reason for this is that it takes the average unemployed person about 37 weeks to find a new job. That is below the high of 41 weeks seen in recent years, but well above historical standards of 10 to 20 weeks.

In comparison, only 39 percent of Americans had at least three months’ expenses saved up before the Great Recession. While that number has improved, it remains relatively unchanged over the past three years, despite personal finances improving in other areas.

Greg McBride, senior financial analyst at Bankrate.com, explains in a press release, “We measure five key components of Americans’ financial security each month, and we routinely find that savings is the weakest area. People who are less comfortable with their savings now versus a year ago outnumber people who are more comfortable by a margin of nearly two-to-one. That’s especially jarring since people are feeling much more optimistic about other aspects of their finances.” 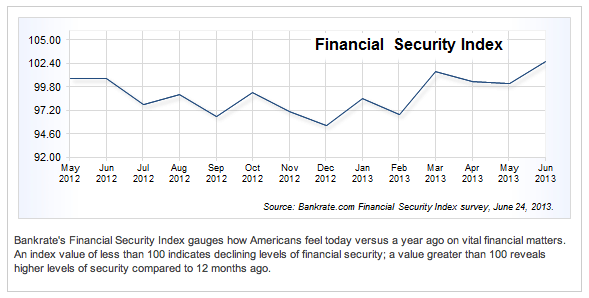 On the positive, Bankrate.com’s Financial Security Index reached a new high of 102.7 in June, logging its fourth consecutive month of gains when compared to the previous year. Only 17 percent reported a lower net worth from 12 months ago, while 26 percent had a higher net worth. Thirty percent of Americans feel more comfortable with their debt levels, and just one in five feel like their overall financial situation is worse now than one year ago, tied for the lowest reading.