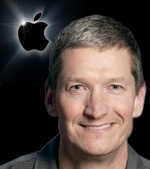 Once upon a time, it was cool to be bullish on Apple (NASDAQ:AAPL). Now, it’s cool to be an Apple hater. Although Apple had an iPhone 5 hiccup and Apple TV is delayed, should investors worry the once $700 stock could tank?

First, let’s start with the elephant in the room: Tim Cook. Is he Steve Jobs? Nobody is. However, Jobs was the pickiest inventor of all time and he left the keys to his kingdom to Cook. Clearly, Jobs expected Cook to grow Apple at least as well as any top tech company in the world. Unfortunately, at the moment Apple’s stock suffers from a “Tim Cook Discount”.

Is the Tim Cook Discount Justified?

Basically, a sizable number of gamblers are betting Tim Cook will crash the car like CEO John Sculley back in the 90’s. However, such comparisons don’t pass the laugh test for the following reasons…

1) Steve Jobs despised Sculley as the business man who took Jobs’s grapes (after a war with the Board), threw away the most important ones, then sold the inferior wine. (If you want the history from Jobs’s mouth, watch the priceless Steve Jobs: The Lost Interview.)

You don’t need a degree in logic to understand this is a different situation. Thus, people betting on this thesis are patently wrong in their assumptions for why the stock will experience the same fate.

Has Apple Lost its Edge?

I generally agree with my friend Henry Blodget’s opinions about Apple. However, he recently opined Apple has lost its edge, and I don’t buy the thesis.

1) Maybe Google’s (NASDAQ:GOOG) new Nexus and Samsung’s Galaxy S3 are superior to the iPhone 5…in some respects. However, if you couple iPhone 5 sales with any ad hoc survey asking people which smartphone they’d buy if they could wave a magic wand, you’d see Apple has built a brand like Starbucks (NASDAQ:SBUX): yes, some people just love their Dunkin’ Donuts coffee (NASDAQ:DNKN), but one is a luxury brand and the other is not.

All things being equal, Apple owns the luxury smartphone market, hands down. Google has become the Microsoft (NASDAQ:MSFT) of the current era, passing over the higher end customer in order to ultimately dominate the middle of the bell-curve. Moreover, unless a walk through New York City or San Francisco is a bad sample, Apple does not have much to fear in the near future — especially since I don’t see hoards of people…

bumping phones like in the Samsung Galaxy commercials. Also, give most people the choice between tablets, and the iPad still has no clear luxury rival. Therefore, I say Apple has clearly maintained it’s edge in this category.

2) Creating a luxury brand brings pricing power. In the case of Apple, they’ve played pricing brilliantly. If you want the latest and greatest, you or your service provider will be paying up. If you want the brand and don’t need the newest release, you can get a mid-priced phone. And, if you are super cheap about your phones yet still lust for an Apple, you can get an older model free (via carrier subsidy).

This is Apple’s way of getting you into their product funnel — and free is the best way possible. Once you are in Apple’s systems you are going to spend the rest of your life getting upsold into multiple price points: inexpensive apps and nanos, mid-priced Macs, and, of course, top of the line versions of computers, tablets, and smartphones.

So long as this remains the case, I am…

not worried about Apple chasing customers who won’t ultimately provide longer-term, lifetime value to the company.

3) I do agree with Henry about the cloud. Apple is behind in cloud computing. However, when did it ever lead? iCloud is Apple’s first beachhead in cloud computing, and although I use all the other services Henry mentions (Evernote, Box, Google Drive), I use iCloud to back up all my Apple devices and keep my photos and other media synced. I agree Apple should do more work in this area, but I don’t think they ever had an edge — so it’s more of an opportunity than a loss.

So, are Apple Fears Overblown??

Yes. Apple fears are overblown. At this moment in time, Apple is still one of the most dominant and craved brands in the world. Moreover, the company’s fundamentals are fairly valued; so, we’re not exactly talking about selling on valuation.

Apple has had some hiccups since Steve Jobs passed. However, a transition should be expected. In this case, a transition has been baked in plus a discount for the company heading in a Jim Sculley direction. If you believe Steve Jobs was a visionary and you see Apple’s metrics maintaining world-class status, you have to bet the company’s stock price will head higher. Then, when you factor in all the super-smarty creatives still choosing to work at Apple rather than the competition, you have to have faith the next set of product cycles will restore the stock price to 2012 highs.