Are Homebuyers Returning to the Mortgage Market Yet? 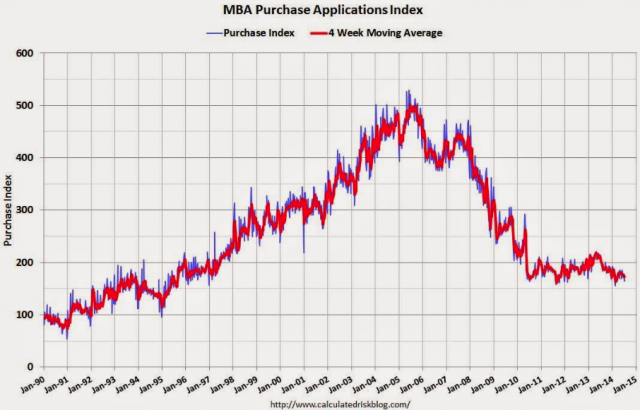 The mortgage market is finding some stabilization with interest rates, but overall lending activity is still weak. According to the Mortgage Bankers Association’s latest update, for the week ended July 11, applications for home loans fell 3.6 percent on a seasonally adjusted basis from one week earlier.

The Refinance Index, which declined more than 13 percent over the past month, dipped another 0.1 percent from the prior week. Furthermore, the seasonally adjusted Purchase Index decreased 8 percent from one week earlier to the lowest level since February 2014. The unadjusted Purchase Index surged 16 percent compared to the previous week, but was still 17 percent below the same week a year earlier. As the chart above shows, applications have struggled to gain momentum for a sustained period since the housing bubble collapsed.

Recent earnings reports also indicate a struggling mortgage market. Wells Fargo (NYSE:WFC), the nation’s largest lender, reported $47 billion in mortgage originations for the second-quarter, up $11 billion from the previous quarter. However, that is still well below its record of $139 billion in the third-quarter of 2012. Meanwhile, mortgage originations at JPMorgan Chase (NYSE:JPM) plunged 66 percent year-over-year in the second quarter. Retail banking revenues at Citigroup dropped 26 percent primarily due to lower U.S. mortgage refinancing activity.