Are Major Stock Indexes in a Bubble?

The Dow Jones Industrial Average and other major U.S. stock indexes faded late on Friday, but posted a positive finish for the week and for the month of November.

Black Friday sales appeared to be strong and economic reports for the Holiday shortened week were largely positive.

In the chart of the Dow below, we can see how the index remains at overbought levels and appears to be losing momentum as a short term top forms near current record levels. Should a correction occur, Fibonacci retracement tools show levels of between 15,300-15,500 as reasonable short term targets. Of course, in this world of QE and never ending rising stock prices, such events are being largely ignored by investors and traders alike. 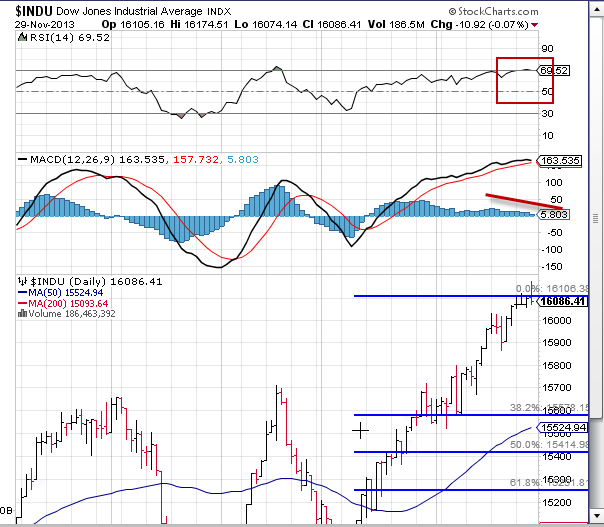 Nevertheless, a number of warning flags are flying that shouldn’t be ignored.

Among money managers, the National Association of Active Investment Managers reported a NAAIM number of 101.45, up from last quarter’s average of 65.40 and the previous week’s 87.43, the second highest reading on record for this metric.

Investors Intelligence points out in its most recent sentiment report that the number of advisor bears has dropped to its lowest point since March, 1987, 14 percent, so bears are virtually nowhere to be seen and such numbers have typically accompanied notable market tops.

3. Margin debt on the New York Stock Exchange is at record highs and comparable to levels seen in 2000 and 2007.

Next week will be back to business as usual with a full trading week and economic reports to include:

Of course, Friday’s jobs reports will be the most closely watched and sliced and diced for hints as to the future of the Fed’s quantitative easing program.

The other important factor is the rapidly approaching December 13th deadline for a Congressional agreement on the budget. If no agreement is reached, mandatory spending cuts are scheduled for January. There is no threat of government shutdown or default this time around, but this fifth try at a bipartisan compromise is unlikely to fare any better than previous attempts at spending reduction and/tax increases/tax code changes.

The more significant deadline is January 15, when the recently agreed to short term agreement on government funding expires.

Bottom line: Heading for the end of a remarkable year, the Dow and other major stock indexes remain overbought, some would say in a bubble, and dependent on ongoing support from the new Janet Yellen Federal Reserve set to take office at the end of January.

Don’t Miss: Is the GOP Backing Away from Immigration Reform?