Are Markets Headed for a Year-End Rally?

Major indexes rallied strongly last week on the strength of Google (NASDAQ:GOOG) and Morgan Stanley (NYSE:MS) earnings, but the Dow Jones Industrial Average (NYSEARCA:DIA) was weighed down by IBM (NYSE:IBM). Friday saw more strong buying as The Wall Street Journal reported that the Fed was unlikely to cut back on quantitative easing in October.

Google powered the Nasdaq (NYSERCA:QQQ) higher as the company’s stock broke $1,000 for the first time, gaining more than 13 percent after a positive earnings report. General Electric (NYSE:GE) managed to jump 3.53 percent despite falling a penny short of earnings estimates of 37 cents per share.

In Europe, earnings reporting season has brought mixed results. Nevertheless, European investors were willing to embrace risk as a result of the strong economic data from China, as well as the expectations that America’s quantitative easing program will continue, unabated, for the foreseeable future. The Euro STOXX 50 Index finished Friday’s session with a 0.76 percent surge to 3,033 – climbing further above its 50-day moving average of 2,871. Its Relative Strength Index is 72.52. Because most investors consider an RSI above 70 as an “overbought” signal, we could see a pullback (NYSEARCA:FEZ).

The big story last week was the temporary settlement of the budget standoff as Congress and the White House punted again and put off the next deadline until mid-December for financing the government and mid-January for raising the debt ceiling. So it’s a temporary fix but temporary was better than none and so markets celebrated the outcome. This Tuesday we’ll see September’s Non Farm Payrolls and Unemployment report, which as delayed due to the shutdown.

For the week, the Dow Jones Industrial Average (NYSEARCA:DIA) rose 1.1 percent, the Nasdaq (NYSEARCA:QQQ) climbed 3.2 percent, and the S&P 500 (NYSEARCA:SPY) jumped 2.4 percent. So now, we’re halfway through October, and October 19 was the anniversary of “Black Monday” in 1987 when the Dow dropped 22.6 percent in one day.

Other major October events include:

So while things are looking optimistic and exuberant, a glance at the following chart is reason for pause: 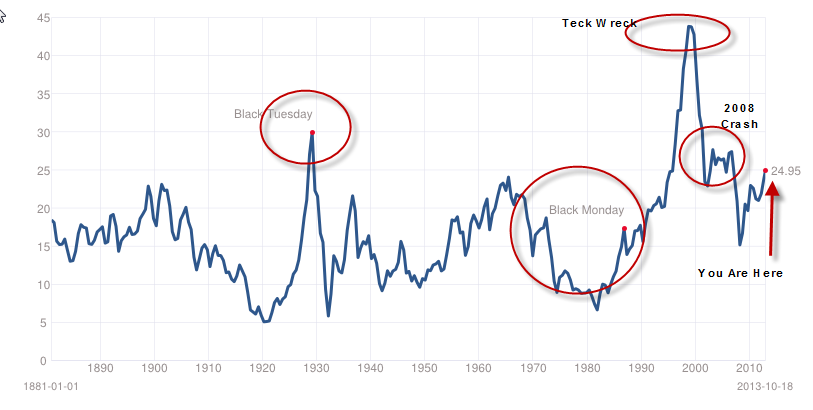 The chart is a graphic indicator of how current conditions regarding price/earnings puts us in the region of significant market declines and so at least a measure caution is perhaps in order as we move through the last two weeks of October.

Bottom line: Stocks make new highs but the Dow lags as investors head into the last two weeks of October. October is also historically the start of many bull markets and the start of the “Best Six Months of the Year,” according to Stock Traders Almanac. The Almanac says that most market gains come between November and May and so bulls are looking forward to the potentially ghoulish October to give way to the powerful year-end rally that we oftentimes see.