Are Politics Standing in the Way of Congress?

While it’s easy to hate on partisan politics, it’s hard to quantify it. However, that hasn’t stopped the Pew Research Center from taking a stab at it. Recently released data from Pew show that not only is partisan polarization at an all-time high, but the divide between policymakers has helped create one of the least productive Congresses.

Data published by Pew in July show that congressional Republicans are more conservative and Democrats are more liberal than ever before. The political divide between the two has increased dramatically over the past few decades in both houses but is most notable in the lower house. The cause, unsurprisingly, is largely a function of an increasing political divide between the voters themselves — one leads to the other, after all.

In Congress, this divide translates into a failure to reach compromise, which is a roadblock to actually getting anything done. Additional data compiled by Pew show that the number of substantive bills passed by each Congress has generally trended lower since the 106th, in 1999-2000. The 112th Congress passed 208 substantive bills. 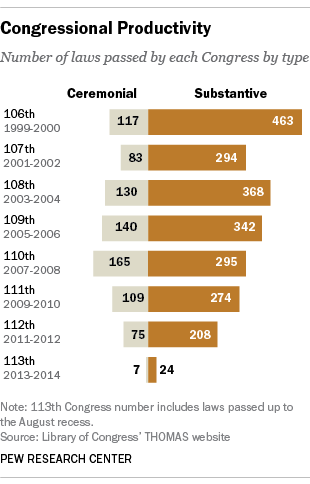