Boston May Host The 2024 Olympics, And That’s A Bad Idea 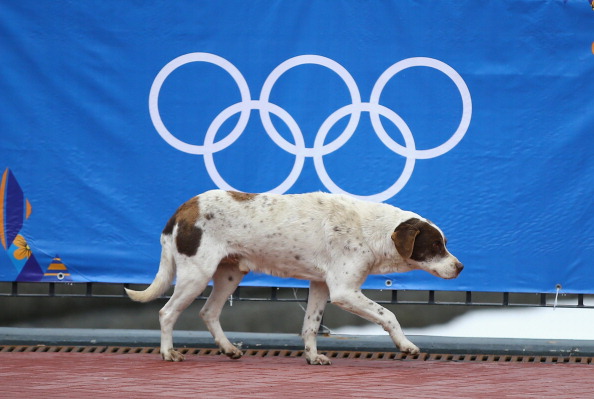 Communities in the northeast and across New England are abuzz with the news that Boston is America’s choice to host the 2024 Olympic Games. That would make the city the first American metropolis to play host since the 1996 summer games in Atlanta, and the 2002 Winter Olympics held in Salt Lake City.

“Today’s selection by the USOC is the beginning of an incredible opportunity for Boston,” said the city’s bid chairman, John Fish, who will be part of a celebratory news conference, according to ESPN. It’s definitely exciting news, because after all, everybody loves the Olympics, right?

Well, maybe they did, until the entire event turned into an economic monster. Case in point, we’re about seven years away from the 2022 games, and every city that has been targeted so far for hosting them has dropped out, including Oslo, Norway. Now the only two cities which are willing to do it are Beijing, China and Almaty, Kazakhstan. Beijing, of course, just held the summer Olympic games in 2008. As for Kazakhstan? Well, this would be the nation’s first hosting gig, and it probably wouldn’t seem like a very good idea for them to take on the responsibility. Thus, it looks as though Beijing will probably end up with the bid.

The main reason is that the Olympic Games are not actually economically beneficial. The costs of holding the games have become staggeringly high and what these host cities and nations typically end up with after the Games are over is considerable debt and a bunch of newly-built structures that will probably never be used again, at least not in the same capacity.

That is what drove officials from Norway to decide on backing away from hosting the 2022 Winter Olympics. Simply put, the country’s administration couldn’t see any possible advantage in doing it, so they pulled the plug on the idea. “We’ve received clear advice and there is no reason not to follow this advice,” Conservative Prime Minister Erna Solberg told Reuters. “A big project like this, which is so expensive, requires broad popular support and there isn’t enough support for it.” 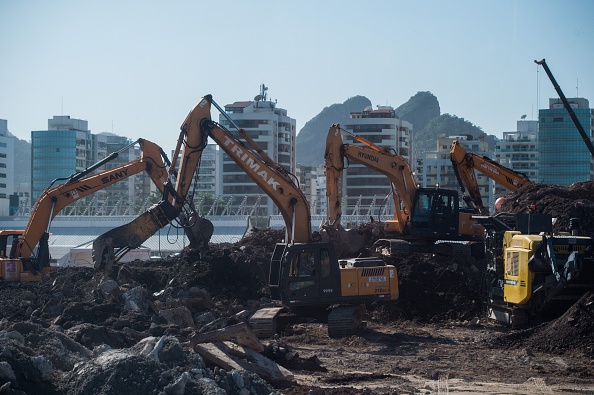 Oslo’s reluctance to take on such a huge responsibility apparently came as a surprise to the International Olympic Committee, the body charged with the governance and oversight of the Olympic Games. “This is a missed opportunity for the city of Oslo and for all the people of Norway who are known worldwide for being huge fans of winter sports,” said IOC Executive Director for the Games Christoph Dubi, according to Reuters. “And it is mostly a missed opportunity for the outstanding Norwegian athletes who will not be able to reach new Olympic heights in their home country.”

But that’s just the thing. If Norway, of all countries on Earth, aren’t willing to host the Winter Olympic Games, then where does that leave the rest of us?

The spectacle that took place earlier this year in Sochi, Russia likely has something to do with why countries like Sweden, Ukraine, Poland, and now Norway have backed away from the games. Sochi hosted the 2014 Winter Olympics and the entire event was marred with issues — from supposed wolves in the hotels (which wasn’t true, of course), to fears of terrorism following bombings in Volgograd weeks before the Games kicked off. In all, Russia spent a hefty $51 billion in preparations to host the Games, surpassing even China’s investment of $40 billion in the 2008 Summer Games, according to Bloomberg.

For that kind of money, countries are obviously expecting to see a return on their investments. But even with giant swaths of tourists pouring into cities to attend the Olympics, it’s hard to imagine these countries would be able to recoup $50 billion from selling food, hotel rooms, and souvenirs. And that is becoming ever more apparent to countries who are looking at the prospect of playing host to the Games. Not only are host nations now expected to have infrastructure in place to deal with the mass of people coming and going, but the IOC wants new, cutting-edge facilities, hotels and transportation infrastructure. 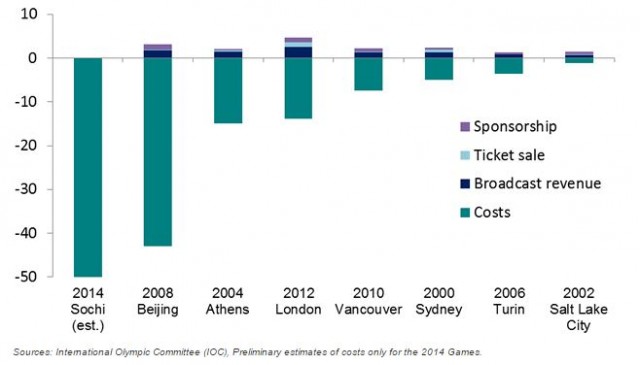 Those costs have ballooned completely out of control over the past couple of decades as well. A quick look back at the costs of previous Olympic events show that Beijing and Sochi have set the bar incredibly high — so high, in fact, that nobody’s willing to make the attempt anymore. As Russia spent $50 billion for the Sochi Games, Greece spent $15 billion to host the Summer games a decade before, according to Forbes. Four years before that, the Games in Sydney cost Australians $3.8 billion, and in 1996, the United States spent only $1.8 billion for the Atlanta Games.

So, comparing the 1996 Olympics in Atlanta to the 2014 Games in Sochi, Russia paid more than 28 times what the U.S. did for the privilege to host.

The chart above, put together by the European Bank for Reconstruction and Development, perfectly visualizes the trend of massive financial losses suffered by host cities and countries. Obviously, Beijing really went out on a limb in 2008, which Russia felt it needed to outdo. But the thing is, China actually had the capital to invest, and did so rather wisely. By planning well-ahead of time, Beijing officials were able to ensure that the new infrastructure and facilities would be put to good use and integrated into the city after the Games were over, instead of being left to erode like they are in many other cities.

Having that infrastructure already in place is likely why Beijing is willing to host the winter Games in 2022. They could effectively get twice as much use out of those facilities that are already in-place, as opposed to starting from scratch. And that gives China a considerable advantage over the other remaining bidder for the 2022 Games, Kazakhstan. A developing country, does Kazakhstan really need to throw tens of billions of dollars at an event that will only last for a few weeks? Probably not.

Rio de Janiero, fresh off of hosting the World Cup, is set to host the 2016 Summer Olympics, and is hard at work with preparations. Rio will be using many of the same investments it made for the World Cup to help offset their costs a bit, but Brazil is still expected to spend $16 billion to host the 2016 Games, according to the Financial Times.

Of course, this comes at the expense of the poor populating Rio, which became readily apparent during the World Cup. Costs for the 2016 Games are expected to come from the private sector, but we will need to wait and see how things play out with about a year and a half to go before the torches are lit. Some people are already starting to see the problems coming down the road as the world’s attention shifts back to Rio for 2016, including Rafael Alcadipani, a professor at the Getulio Vargas Foundation.

“Just as Brazil’s attention turns to the Olympics, all the scandals and the full cost of the World Cup will start to become public,” he told the Financial Times. “There will already be revulsion over how much was spent on the stadiums and we will have to spend more on the Olympics, so it could be an even more difficult situation.”

As if to summarize the feelings of Norway, Sweden and almost every other nation on Earth, Alcadipani says that hosting the Olympics is just simply not a good idea anymore. “Hosting this type of mega event just doesn’t make much sense any more,” he said.

What does that mean for Boston? Perhaps that the city should seriously reconsider its bid. Of course, it’s not a foregone certainty that the Olympics will actually be held there in 2024, but the list is being narrowed down. Without a doubt, the Olympics bring some positives to the table by infusing the local economy with short-term employment opportunities and an influx of foreign cash, not to mention displaying the city on stage for the whole world to see. But looking at the big picture, it seems that the Olympics may be more of an expenditure and hassle than an economic opportunity to be seized.