From Inequality to Unemployment: Obama’s Track Record in 4 Charts 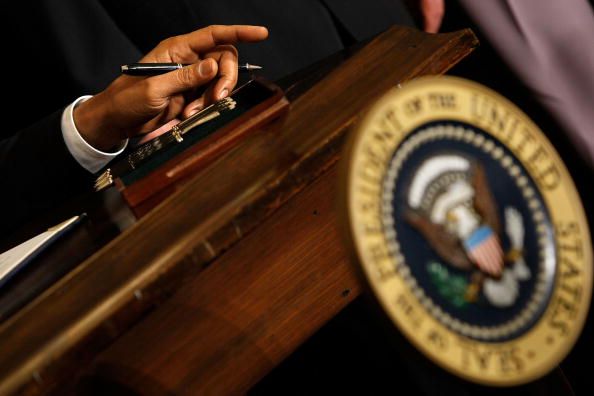 It’s been more than six years since president Barack Obama was sworn into office. As most people remember with the financial crisis at its height, two wars half a world away, and most of the country thrown into financial strife, 2008 and 2009 were two of the most turbulent and volatile years in recent history. Obama ran on a platform of hope and change, which many people, perhaps naïvely, bought into. That’s not to say that Obama hasn’t delivered on some of his promises, which he has, but drinking the kool-aid that any politician is offering will lead to predictably underwhelming results.

A piece from The Washington Times recently explored the notion that the economy is on a better footing now than when the president took office in early 2009. Particularly, the article’s author, Joseph Curl, set to take the president to task for saying the following: “By every economic measure, we are better off now than we were when I took office. You wouldn’t know it, but we are.”

Now, there are plenty of reasons to be skeptical about what the president is saying here, but also reasons to nod accordingly. In order to dispel what the president’s statement, the piece from The Washington Times looks at several different metrics and economic indicators to provide a snapshot of the true strength of the American economy. The findings don’t provide a pretty picture.

Specifically, Curl digs into another Obama quote, which was said during a stop in Minnesota last month. “Over the past 51 months, our businesses have created 9.4 million new jobs,” Obama said “Our housing market is rebounding. Our auto industry is booming. Our manufacturing sector is adding jobs for the first time since the 1990s. We’ve made our tax code fairer. We’ve cut our deficits by more than half. More than 8 million Americans have signed up for private insurance plans through the Affordable Care Act.”

In contrast to the president’s claims, Curl finds, through a variety of sources, that home sales are down 5 percent, the number of autoworkers is still below 2008 levels, the federal deficit remains incredibly high, and that despite the reported success of the Affordable Care Act, no definitive proof of that success in terms of numbers has ever been presented by administration officials. 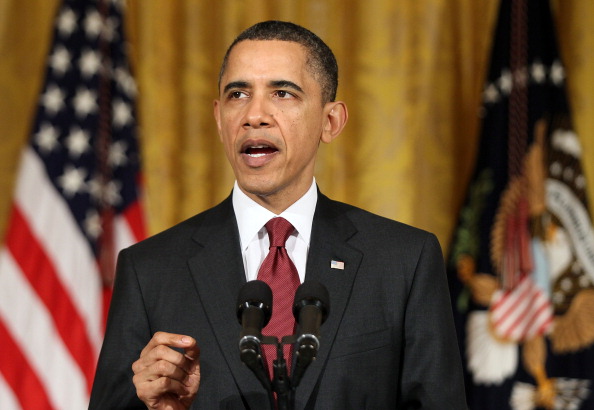 By looking at these metrics, it’s easy to see that Curl has a point. By many measures, the economy is not as strong as it was. But by many others, it has been strengthened. The most glaring issue when it comes to discussing the failure or success of the economy — and economic policies, by proxy — is that it usually boils down to partisanship. Democrats will be the first to tell you that Obama has the country back on its feet, while Republicans will throw around impeachment threats and talk to no end about how the president has irreversibly destroyed the country.

So who is correct, and who is wrong? Well, the answer is both sides are. While the economy certainly hasn’t been destroyed, growth has been sluggish. It’s also not completely unreasonable to expect sluggish growth following such a cataclysmic financial disaster, along with two wars that were never paid for. By some accounts, the two biggest factors that have led to America’s recent economic woes can be traced back to Bush-era tax cuts and the long, costly overseas military engagements.

The fact is, this really doesn’t matter. What people wanted to see out of Obama was progress, and in some respects, they have. The Washington Times piece is correct in asserting the housing market is still down, the federal deficit continues to be out of control, and that the number of auto workers continues to be down.

But there are also positives to look at as well. Jobs numbers are back up to pre-recession levels, the stock market is booming, and corporate profits are through the roof. Basically, it depends on what metrics you want to look at. In order to take a truly exhaustive look at the economy, a report would need to be commissioned with pages numbering in the hundreds. Instead, we’re going to look at four charts that offer an alternative view to the economy’s strength, and come to a conclusion of Obama’s performance, as compared to reviews of his own performance.

Here is a look at the economy, since Obama has taken office, in four charts. 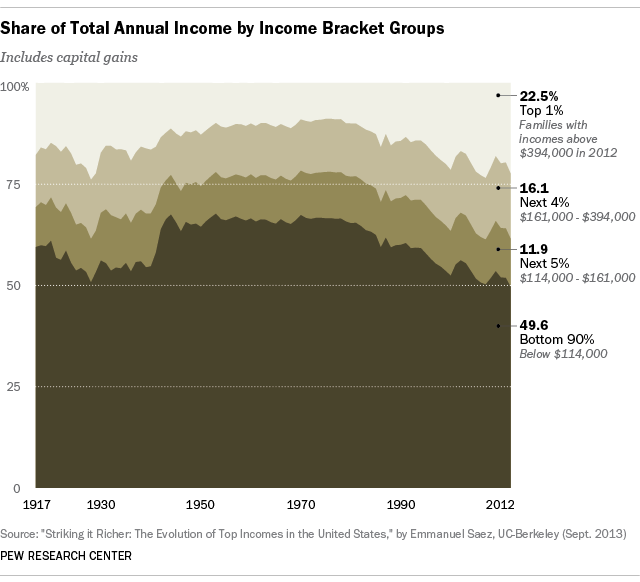 Income inequality has dominated headlines and talking points for the past few years, especially when it came to topics involving Occupy Wall Street and the Koch brothers. There are a multitude of factors that play into inequality, but there is one undeniable truth: America is becoming more and more polarized, and the middle class is suffering. The chart from the Pew Research Center above shows that the bottom 90 percent of the population is taking in just under 50 percent of the wealth, while the top one percent secured 22.5 percent in 2012. By looking at the numbers over time, it would appear inequality is getting slightly worse under Obama’s watch.

While the income gap may be growing, it’s also important to consider the president’s actual role in helping to stymie the growth of the rift. Many issues can be seen as institutional, rather than having to do with the president’s policy. Obama has supported minimum wage increases and tax increases, meant to close the gap. But he has been met with fierce opposition at every step. Yes, he is still responsible for what happens on his watch, but inequality growth may be a hard metric on which to pin the president’s failure. 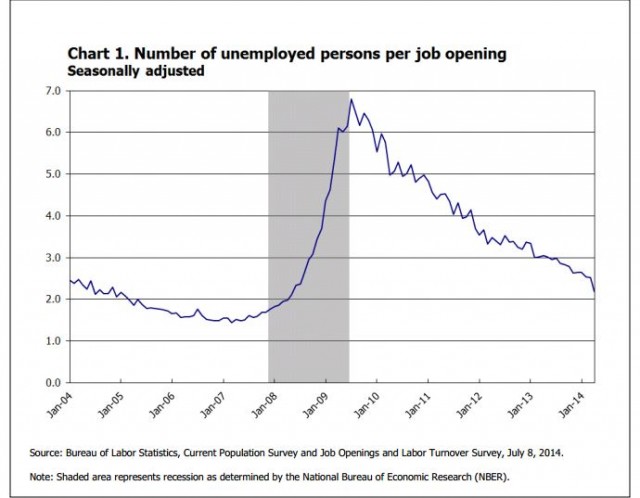 One area of success during the Obama administration’s tenure has been in employment numbers. At the height of the financial crisis and subsequent recession, the unemployment rate shot way up. Since then, things have recovered and job numbers are back at pre-recession levels. This has been a major point of triumph for the president, but much like with inequality, there are many caveats on which things may not be as great as they seem.

Many of the jobs recovered since the recession are low-wage and low-skill positions, and many people have taken substantial pay cuts just to get back in the labor force. The chart above, from the Bureau of Labor Statistics, shows the number of people applying for each open job has dropped dramatically, which does indicate success. But it’s important to remember that most of the spoils from the economic recovery have gone to the top earners, leaving everyone else to fight it out among themselves.

Jobs are back, but the struggle lives on. 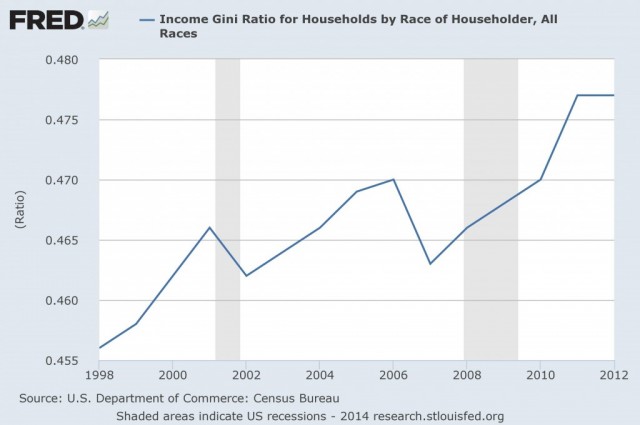 Not many people are familiar with the Gini Coefficient, as it is one of the more nebulous metrics put together to measure economic strength. Essentially, it measures inequality on a scale from zero to one, with a zero meaning everyone in a society has an identical income, and a one indicating that a single person gets all the spoils for themselves. The chart above shows the U.S. sitting somewhere in the 0.477 range. You can also see that inequality gained quite a bit of elevation following the recession, where almost all economic gains went to the rich.

Since then, things have leveled off. This is the important part to note, because it most likely took a couple years for the president to actually put in some work on the issue. Inequality is still very high, and Obama was still sitting in the presidency as it quickly ascended to record heights. But recent data shows things are slowing down, if not turning around. It likely won’t be known for a few years exactly where the graph turns next, but right now, the Gini graph doesn’t provide a pretty picture for the Obama administration, with the exception of the last little bit. 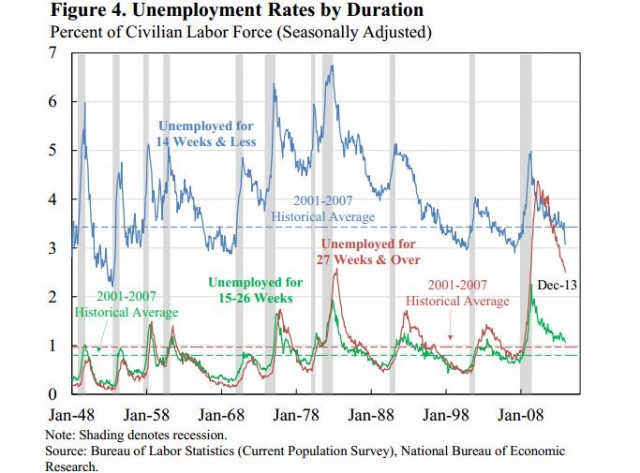 One final metric to examine is duration of unemployment. Obviously, we’ve seen that the jobs numbers have improved dramatically since Obama took office and brought the country back out of the recession. But one area that has always plagued the economy is in long-term unemployment. A look at the graph above shows an incredible spike in long-term unemployed numbers in 2008 and 2009, but since then, the number has taken an impressive tumble.

The numbers are still well-above average, but if the current down-slide is any indication, the number of the long-term unemployed should keep dropping. Even if those numbers can keep up with historical averages, the economic outlook will be much brighter.

So has Obama put the economy back together again? The answer is not clear-cut, and is more of a “yes and no.” Many areas, like housing and federal deficits, do need to be addressed. Others, like employment and the stock market, have seen big-time improvement. One question that’s important to ask is what exactly were expectations for Obama facing the worst recession in recent history, and two foreign wars? While certainly not an excuse for poor performance, these are just two factors that must be taken into account when discussing Obama’s economic legacy.

Are things better than they were? By most accounts, yes. Is there still work to do and can things be better? Absolutely. Is the president’s self-review spot-on? Yes and no.