Are Americans Better Off Now Than a Year Ago?

While the economy is still trying to fully recover from the financial meltdown known as the Great Recession, more Americans are feeling better about their personal situations. In fact, sentiment readings are hitting new multiyear highs.

Almost half of Americans consider themselves better off this year than last. According to a new poll from Gallup, 47% of Americans say they are financially better off than a year ago, compared to only 28% who say they are doing worse. Those are the best readings by Gallup since before the financial crisis. In 2008, as many as 58% of Americans said their situation was worse from the prior year. Last year at this time, 35% of Americans said their financial situation was getting better and 42% said it was getting worse. The more positive results in 2015 are closer to what Gallup measured during strong economic times over the past 40 years. 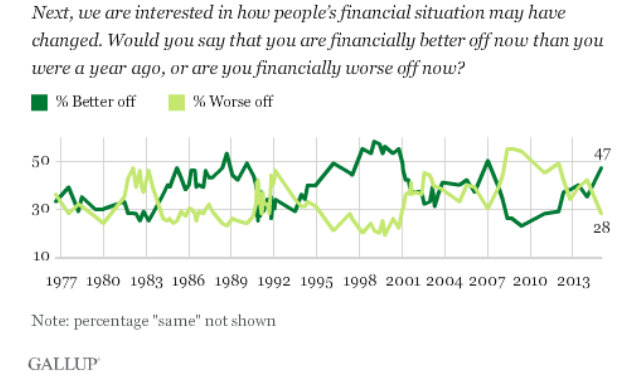 “The improvement is especially notable given that just five years ago, near the end of the Great Recession, Americans gave the bleakest assessment of their personal finances at any time in the last 40 years,” Gallup said. “As usual, most Americans expect things to continue to improve over the next year, but the optimism they express about the coming year also exceeds what is typical.

“Whether Americans’ finances actually improve over the coming year will depend in large part on whether the national economy continues to get better, or takes a step back.”

Americans making less than $30,000 are the only respondents more likely to say their situation is getting worse rather than better. Looking ahead, 65% of Americans in the Gallup poll expect to be better off a year from now. Only 15% expect to be worse off. Interestingly, at no point in the last 40 years — even during tough economic times — have more Americans predicted their finances to get worse rather than better. The peak came in March 1998, during the dotcom bubble, when 71% expected their finances to improve over the next year.

Gallup is not the only organization measuring a recent improvement among consumers. In a separate report, the University of Michigan’s preliminary reading on consumer sentiment rose to 98.2 in January, its highest level in 11 years and above estimates. The survey’s gauge of current economic conditions and consumer expectations both climbed from December.