Are You Taxing Yourself? How Your Things Really Own You 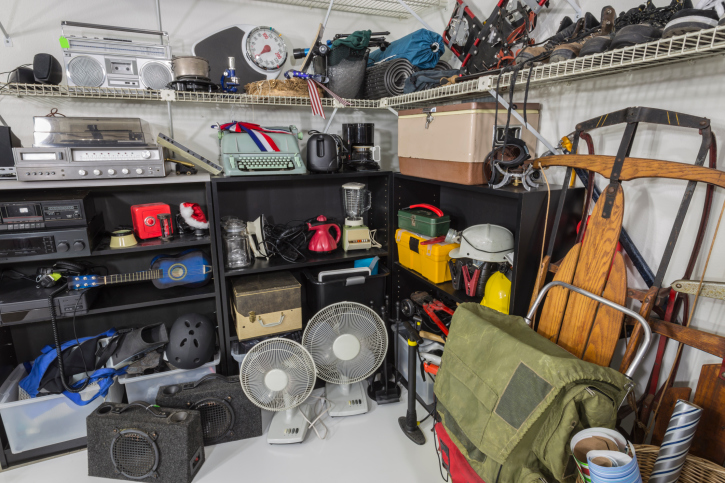 This bit, delivered by stand-up comedian George Carlin on his 1981 album ‘A Place For My Stuff’, is resoundingly insightful. Yes, it’s meant to be funny, but like so much of Carlin’s material, it strikes at an often unspoken truth about everyday life for many Americans – in this case, that we all have a lot of stuff, and we spend most of our time trying to get more, and trying to protect it.

And that comes at a huge expense.

We typically think of our houses or apartments as the place we live, but as we live our lives and come into possession of more things, our homes need to swell to accommodate it all. We spend more and more money on extra space, all in order to store and protect our stuff. In this way, we end up spending more than we should. Our things – stuff that we already own – end up becoming a liability. We’re effectively paying rent on our own belongings.

That’s at the heart of a new infographic and accompanying report from CashNetUSA, a company that provides financial services and credit alternatives through its online platform. In that post, titled How Much Stuff Do You Actually Own?, it’s revealed that our possessions lead many, if not most Americans to feel that they’re drowning in clutter, much of which we barely, if ever, use.

The main reason for this, and why it’s so different from past generations, is because things are cheap now. “Before 1750 and the industrial revolution, a shirt would have cost $3,000 in today’s money,” author Liz King writes. “For this reason, belongings were passed down generation to generation, meaning people spent less and items lasted longer. However, in an age of abundance, the West continues to stockpile possessions, so much so that 25% of people with 2-car garages don’t have room to park their cars inside of them.”

This, the infographic mentions, is the result of the pushing of ‘retail therapy’, a part of our consumer culture. Our economy depends on continued consumption, and over time, we accumulate an awful lot of stuff that doesn’t really serve much purpose, but that we feel we need to hold on to. For example, CashNetUSA’s post cites a UCLA study from 2012 that revealed the average American home housed nearly 40 pairs of shoes, 90 DVDs/videos, more than 200 CDs, and 438 books and magazines.

The issue here is that these things are a huge expense. An expense not only in the form of making the actual purchase, but of storing all of that stuff.

Who needs more than 400 books and magazines, or 200 CDs, anyway? All of those could be stored digitally these days, or replaced with a library card. People enjoy having them around, but the main point here is to realize that just because you already paid for something doesn’t mean you’re not being taxed by your own possessions.

If you’re feeling overwhelmed by your stuff (which 54% of Americans do), or that it’s all just simply too much to deal with (as 78% of us do), then we may actually have a problem. If your things are causing you emotional or psychological strife, it may be time to take action.

That’s not to say we’re all hoarders. But taking stock of our stuff, we can probably take some of the pressure off, and even save some money. Perhaps look at some of the lessons from philosophers and writers like Henry David Thoreau, and live more simply? It’s easier than ever these days. You can get rid of those CDs, and store all off your music on something smaller than a credit card. Books? Buy a Kindle. Movies? Get an iPad.

Of course, it’s all up to you. Stuff gives us comfort, and if you’re willing to keep shelling out your money to store all your stuff, then that’s perfectly fine too. Just realize, your belongings are taxing, and by giving it some thought, you may be able to take a load off of your mind, and your wallet.

To see the infographic, visit CashNetUSA.