Avian Flu: How Breakfast Is In Danger, and So Is Ice Cream

In the eternal question of the chicken or the egg coming first, cause and effect is often debated. But in the case of your breakfast becoming a lot more expensive, the chicken is without a doubt the origin of the problem. As fast food chains are expanding their breakfast options for longer hours and more options, the entire food industry in the United States has been hit with a bad case of the flu. The avian flu, that is. As poultry farmers across the country are figuring out how to contain the spread of the highly contagious virus, the prices of eggs are going up — and it’s going to affect way more than the availability of your Egg McMuffin sandwich.

The avian flu has swept across the country from the Pacific Northwest to the Midwest, where a majority of egg-laying hens are kept for our country’s egg supply. Since December, the flu has been responsible for the deaths of about 45 million turkeys, chickens, and ducks, either through direct infection or from euthanasia as officials attempt to stop the spread of the disease. Iowa has been hit especially hard, which is bad news for the rest of the country since 1 out of every 5 eggs sold in the U.S. originates from the state, according to a report from The New York Times. More than 40% of the state’s flocks have been hit, with an estimated 24.8 million birds killed as a result.

One farmer, J.T. Dean, was required to kill 5.5 million laying hens in 26 metal chicken houses. Only two of the houses were infected, but Dean has to kill the rest of his flocks in attempts to stem the tide of spreading disease. Dean told the Times it could take as long as two years to completely recover from the outbreak.

The disease is having a marked impact on eggs prices across the country. The U.S. Department of Agriculture’s weekly egg report shows that egg prices have jumped an average of 33 cents per dozen on jumbo eggs, 33 to 57.5 cents for extra large, large, and medium eggs, and 35 cents on small eggs. In just one week, prices in the Midwest for egg sales have jumped about 20%. At the beginning of June 2014, egg prices per dozen were about $1.30. One year later, the average is $2.10 per dozen.

That might not seem like it’s going to break the bank when you’re only buying one dozen at the grocery store. But the shortage of eggs affects almost every branch of food service, as eggs in various forms are used in breakfast dishes at fast food restaurants and used in manufacturing to create ice cream, cake mixes, mayonnaise, and more. If the avian flu isn’t contained, you’ll see those price increases passed on at the grocery store and on your restaurant tab. 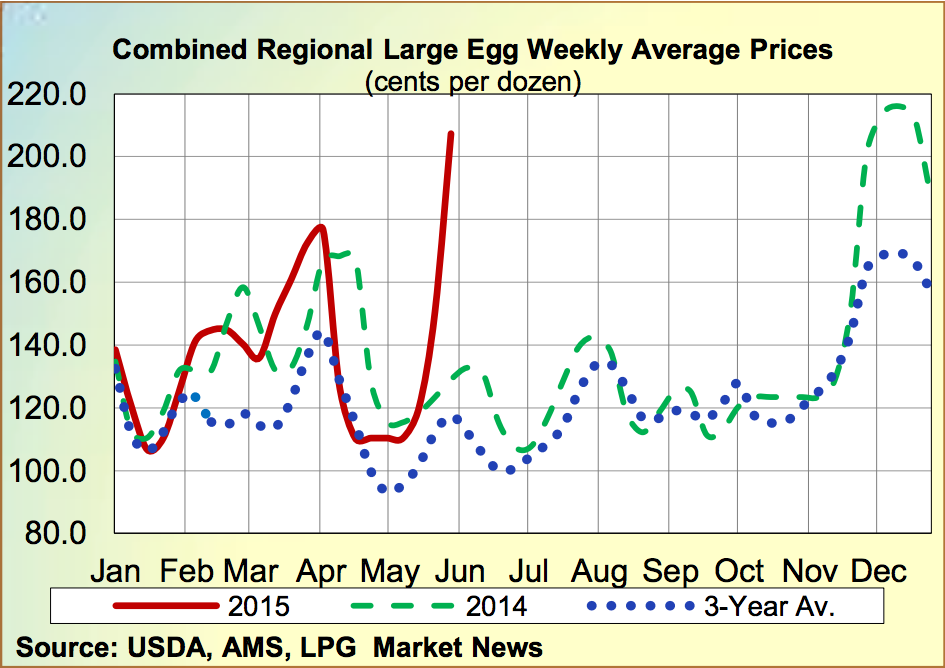 Liquid, frozen, and dried eggs are sold in enormous quantities to companies like General Mills and Nestlé, who use the eggs for all sorts of food production. In the USDA’s weekly report dated June 1, dried egg prices are “sharply higher" than in weeks past. The supply for all three types is described as “light" to “short of needs," even as demand continues to be high. Nestlé is keeping an eye on supply levels for production of its Dreyer’s, Edy’s, and Häagen-Dazs ice cream products. Companies like General Mills are receiving tens of thousands of pounds of plant-based egg substitutes from businesses like Hampton Creek so they can continue producing its line of Betty Crocker cake mixes and refrigerated cookie doughs.

Some egg suppliers for McDonald’s have been hit by the bird flu, company spokeswoman Lisa McComb confirmed to The New York Times. But so far, it’s not a concern for the breakfast giant. “We proactively developed contingent supply plans, and we do not anticipate an impact to our ability to supply eggs to our restaurants and serve our customers," she said. Other chains aren’t quite to impervious, however. Southern chain Whataburger announced May 31 it would be cutting its breakfast menu availability to just four hours on weekday mornings, and would be served on an as-available basis.

On top of normal eggs, Whataburger also uses the product to make its pancakes, honey butter sauce and cinnamon rolls. “We don’t know why other restaurants haven’t been affected by this shortage yet, but it sure has affected us," the company stated on its Facebook page. “Our primary egg supplier was one of the hardest hit by this shortage. The change back to our regular breakfast menu and hours will happen gradually as we replenish our supply; we will be sure to keep you informed."

In some cases, companies are looking to import eggs from abroad, a move that means groups like the American Bakers Association has to put pressure on the USDA to speed up the approval process. “The U.S. has never imported any significant amount of eggs, because we’ve always been a very low-cost producer," Tom Elam of FarmEcon, an agricultural consulting company, told Reuters. “Now, that’s no longer the case." According to the news agency, Canada is also short on eggs and Mexico is suffering from strains of the avian flu as well. This means that egg products, if imported, will likely have to come all the way from Europe.

Though avian flu is highly contagious among birds, it’s not known to spread between humans, according to the U.S. Department of Health & Human Services. Humans can get the virus by coming into contact with infected birds, but it can’t be contracted by consuming properly cooked poultry and eggs. According to the USDA, no human cases have been reported from the outbreak in the United States or Canada.