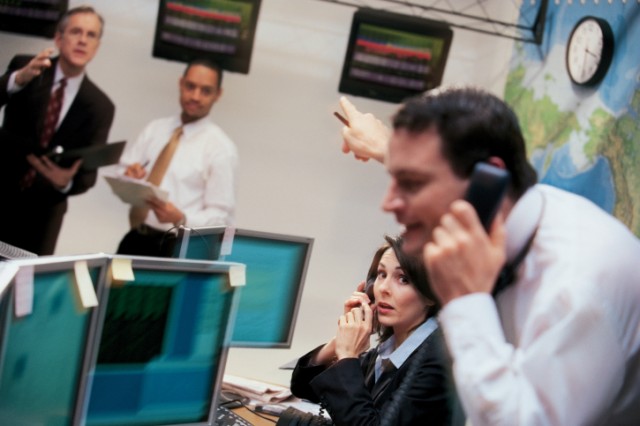 Financial stocks have been underperforming the broader stock market for the year. Year-to-date the SPDR Financial ETF (NYSE:XLF) is up about 4 percent while the S&P 500 is up about 6 percent. But the XLF’s performance is worse when we consider that the fund’s top two holdings are not your typical financial stocks, and they have incidentally outperformed. The top holding is Wells Fargo (NYSE:WFC), which doesn’t suffer from the problems that I am about to lay out. The stock is up 13 percent for the year. The second largest holding is Berkshire Hathaway (NYSE:BRK.B), which is Warren Buffett’s company. It is up about 8 percent, although investors should note that the company is like a mutual fund that holds several companies, many of which are not financials. In fact, Buffett’s largest financial holding is none other than Wells Fargo.

If we look at the performance of other financial stocks, the underperformance seems to be less of a statistical anomaly and more of a fundamental driven phenomenon. For instance, JP Morgan (NYSE:JPM) is down nearly 5 percent for the year and its year-over-year Q1 earnings fell 20 percent. Bank of America (NYSE:BAC) is another large holding and its stock is down more than 1 percent for the year. Bank of America also posted a loss in the first-quarter and it continues to have problems with the government. The next stock down the list – Citigroup (NYSE:C), the fifth largest holding and the last to exceed 5 percent of the portfolio — is down 10 percent for the year.

There are a few issues with the financials. The first is that these companies simply have no growth. There are certainly exceptions if you look among the smaller companies, but the so-called “big banks” have relatively flat revenues if they aren’t declining, and most of the profit growth, if a company has profit growth, is coming from stock repurchases. Despite rising home prices, a lot of the demand is coming from private equity firms and foreigners who are paying in cash — not Americans living the American dream with a home and a mortgage. In fact, we are seeing a record number of all cash sales.

The second is that while banks are willing to lend, they are only lending to the most credit worthy borrowers, and given how low interest rates are, the banks can’t really make a lot of money on these loans.

The third is that new financial regulations are making some of these banks’ businesses unprofitable — notably trading. Furthermore, there is more red tape that is more costly. While this makes it more difficult for new banks to enter the business, it also slims down the profits of the existing banks.

The bottom line is that there are headlines in the industry, and it is showing up in revenue figures as well as stock performances. But it gets worse now that we are seeing banking risk increase once again in Europe. If this escalates it is quite possible that banks will pull back their horns even more, or even worse they could take write-downs on their European holdings.

So while many bank stocks look cheap given single digit or low double digit price-to-earnings ratios, don’t be fooled. There are much safer places for your money in a market that can get very volatile in a short amount of time. If you must own a financial stock look for companies with low leverage, and look for banks that operate regionally in parts of the country (or in another country for that matter) that have relatively strong economies.

Disclosure: Ben Kramer-Miller has no position in the stocks or funds mentioned in this article.