For anyone who loves old cars and has a little mechanical inclination, it’s a dream: Buy an old car for next to nothing, pull it out of a barn where it’s sat for decades, and bring it back to its former glory. Over the past few years, “the barn find” has been one of the most compelling narratives in car culture — so much so that faded paint, worn interiors, and cloudy gauges have become badges of honor. These cars aren’t falling apart; they have decades-old “patina” that can’t be replicated.

So let’s say you decide to buy a barn find of your own. You find a derelict car, get it home, and start work. Then, life gets in the way. Or you go over budget. Or you lose interest. Either way, your pride and joy has just become a garage ornament, and it’s no closer to getting back on the road than it was when you found it.

Luckily, these classics have been a little luckier. After decades of being lost, they were rediscovered and fetched a fortune on the collector car market. Here are 10 of the most fascinating and expensive non-running classic cars ever sold. 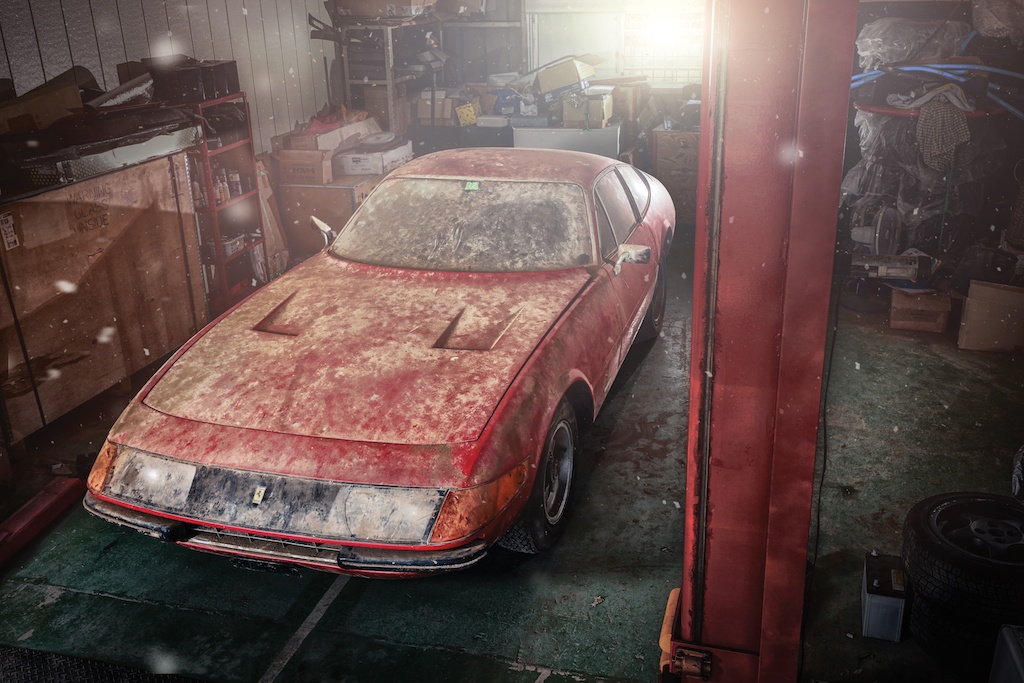 The gorgeous Daytona is considered by many Ferrari collectors to be the brand’s last great front-engine car. As a result, the value for these cars has skyrocketed. But that’s nothing compared to what this car fetched. Discovered after sitting in a Japanese garage for nearly 40 years, this alloy-bodied Daytona is just the 30th out of around 1,200 cars built. It was sold by RM Sotheby’s for around $2.1 million in September 2017. 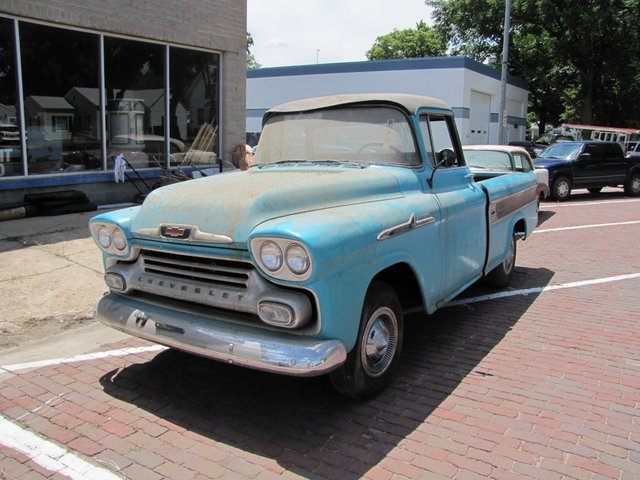 This truck brings a whole new meaning to “ran when parked.” For nearly 50 years, Ray Lambrecht ran a Chevy dealership in Pierce, Nebraska. What inventory he didn’t have room for on the lot, he kept on his farm. And what he liked, he kept. In 2013, with Lambrecht out of the car business and in his mid-90s, he decided to auction off the nearly 500 technically “brand new” cars, creating one of the most hyped collector car events of the decade.

The star of the show was this 1958 Chevrolet Cameo Carrier. Already a rare truck, it had moved just 1.8 miles since it rolled out of the factory. A collector bought it for $140,000. 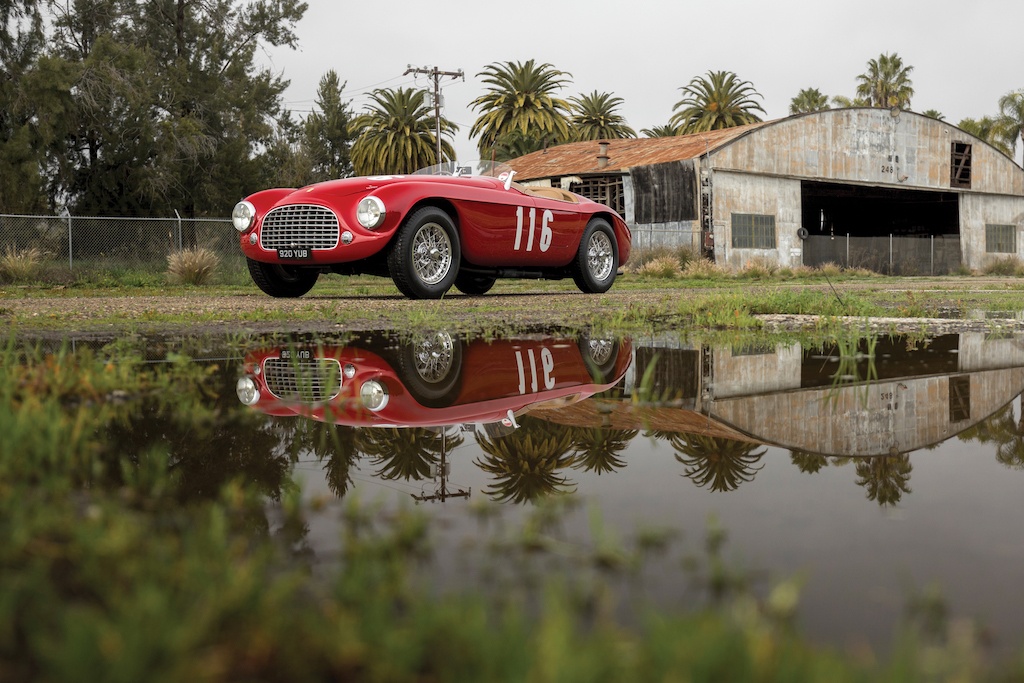 In the early 1950s, an American serviceman bought a strange car at a Swiss used car dealership on the advice of a friend back home. The car turned out to be a Ferrari 166MM, one of just 25 cars built and the model that helped establish the brand as a performance car powerhouse.

The car was run in Arizona for a few years until something broke. So it was left in a backyard for over four decades until the owner died, and his children put the word out about the car. It was sold to a California collector in 2007 for over $1 million. 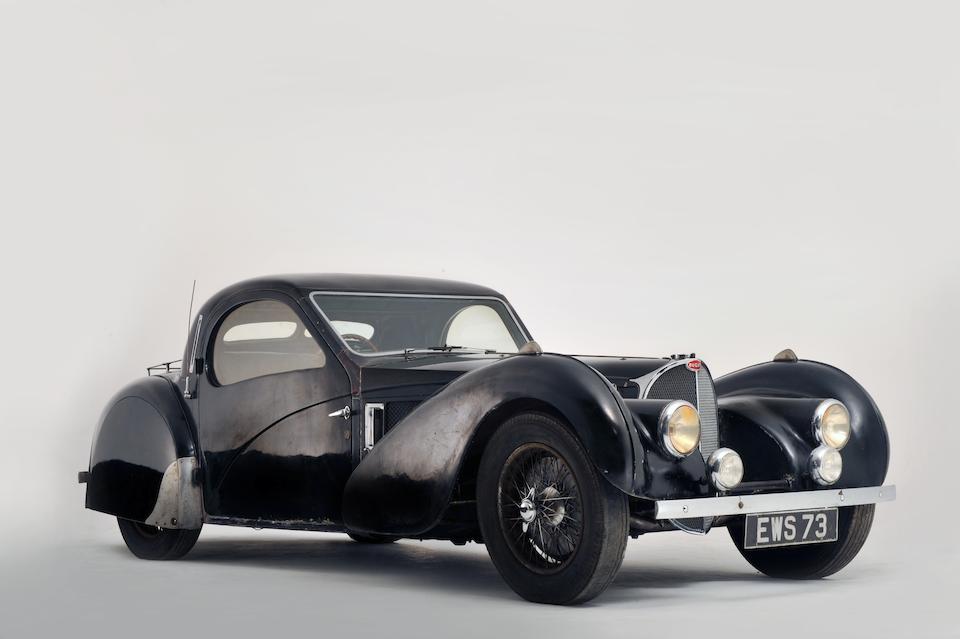 With just 17 made, the radical Bugatti Type 57 S Atlantique is considered to be one of the most beautiful cars ever built. In the 1950s, an example of the already desirable car was bought by a Harold Carr of Newcastle, England. In 1960, he took the Bugatti off the road in 1960 and parked it in his garage. Over 47 years later, he died and left his estate to his family. They took the Bug out of storage and sold it as is through Bonhams in 2009. It fetched more than $4 million. 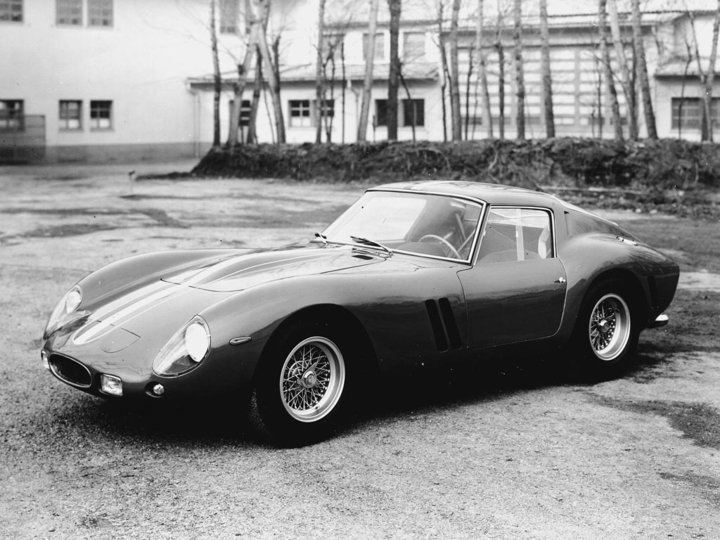 This car is the granddaddy of all barn finds. The 250 GTO is one of the most sought-after and valuable cars in the world. With just 39 produced over just two years, models with the right provenance are now worth upward of $50 million.

An amateur mechanic in Ohio bought an incredibly rare right-hand drive model in 1972 for $6,500 with the intention of restoring it. He never did, and it sat on a trailer in his driveway for the next 14 years, eventually attracting Ferrari collectors from around the world. The car was bought by a Swiss collector for a princely sum of more than $4 million in the late ’80s. It’s likely worth multiple times what was paid for it. 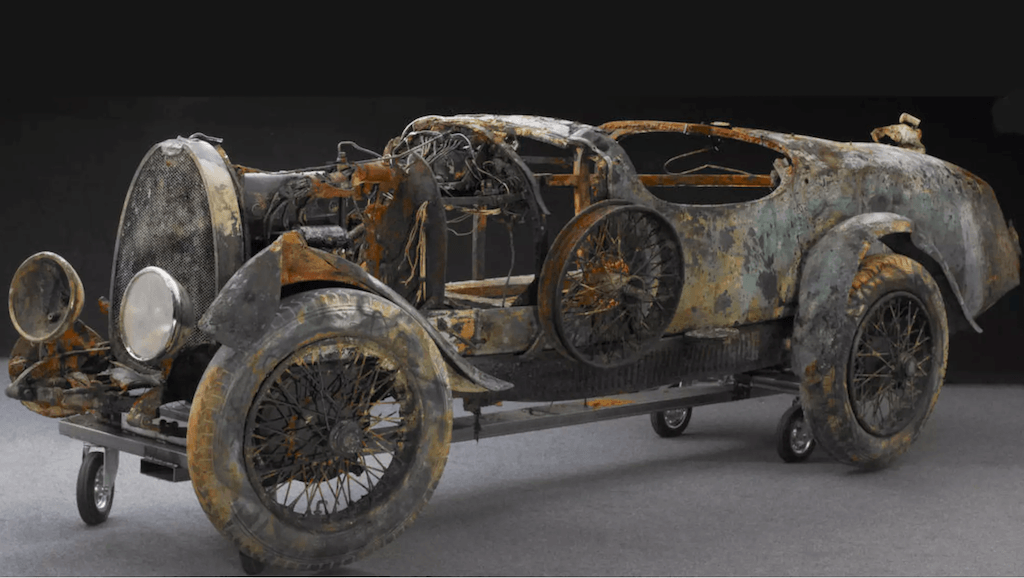 This is less of a barn find and more of a lake find. It also shows how far car collectors are willing to go to find a missing gem. In 1934, a Swiss playboy named Adalbert Bodé bought a Bugatti in Paris. When he reached the Swiss border, he didn’t have the money to pay the import taxes on his new car. So instead of finding the money, he abandoned the car. Instead of impounding or selling it, the Swiss authorities simply dumped the car in Lake Maggiore and forgot about it.

The car was the stuff of local legend until a group of amateur divers discovered it 173 feet below the surface of the late in 1967. In 2009, the car was raised and auctioned off, with the profits going to combat local youth violence. The remains of this once-impressive car fetched more than $300,000 at Bonhams’ Retromobile auction in 2010. 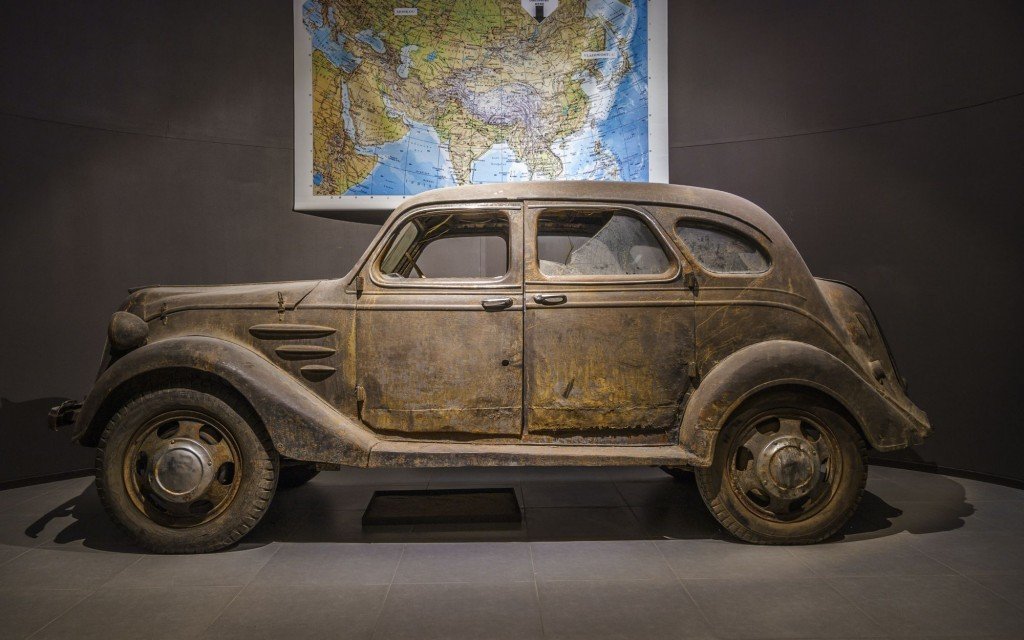 This is where the world’s largest automaker got its start: the art deco-influenced AA. Built from 1936 to 1943, Toyota (then known as Toyoda) built just over 1,400 of these luxury cars. Unfortunately, the majority were thought to be destroyed during World War II, with the remainder lost in the years after. Toyota was so convinced the AA was extinct that in 1986, it built a replica to display for its 50th-anniversary celebrations.

That’s what makes this find so extraordinary. No one knows how the lone surviving AA ended up in Russia. But in 2008, the family of a Siberian farmer put this car up for sale. Experts believe the AA was used by Japanese bureaucrats in occupied Manchuria, then taken west as war spoils after the Soviets invaded. Since the late ’40s, it was used as a field car on a farm. After paying an undisclosed sum (which the sellers were reportedly very happy with), the car sits in as-found condition at the Louwman Museum in the Netherlands. 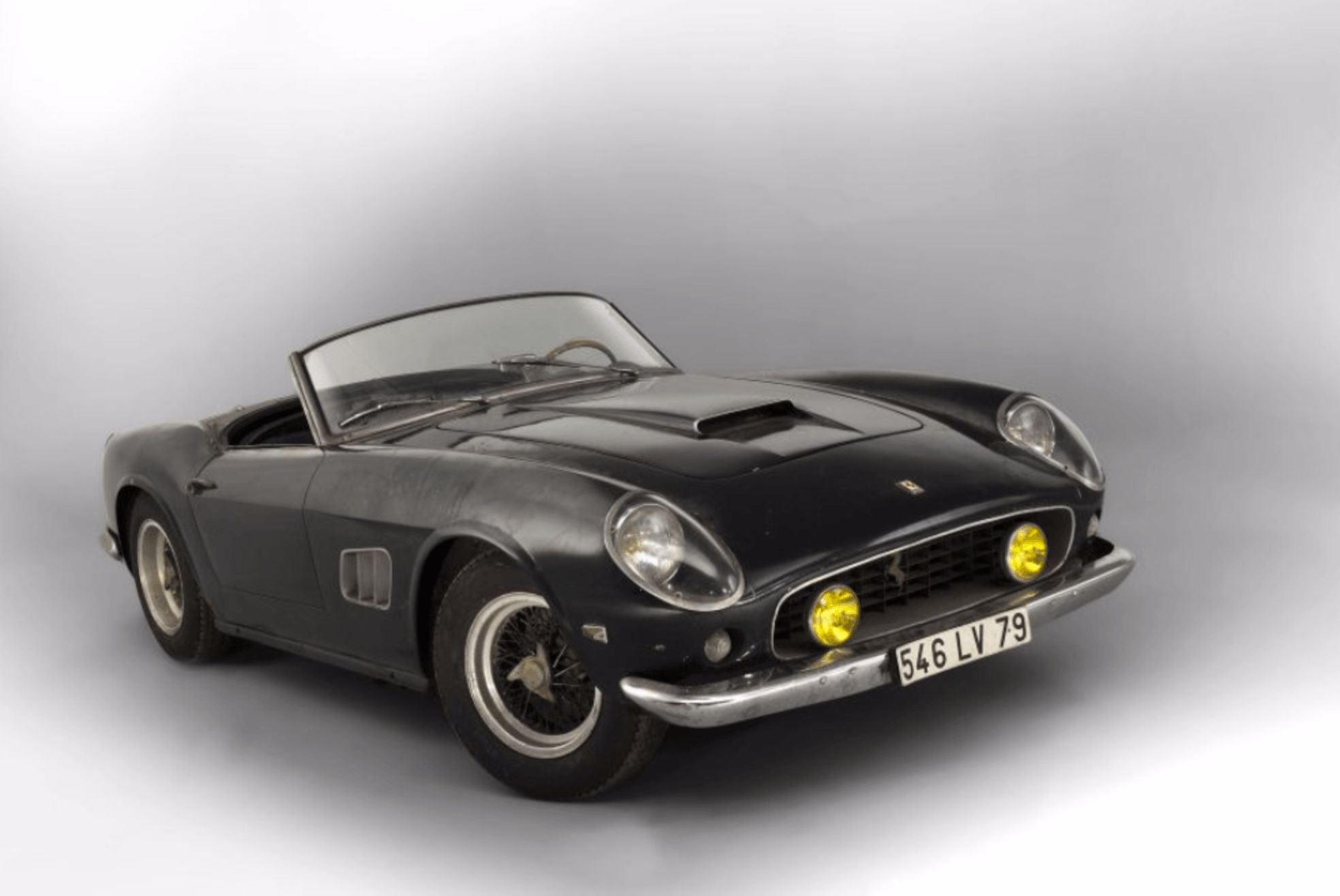 When this car was unearthed in 2014 along with nearly 60 other classics, it was described as the “holy grail of barn finds.” In the early ’60s, this black California Spider (one of 37 made), was owned by French actor and jet-setter Alain Delon. Nearly 50 years later, it was found parked in a debris-filled garage next to a 1956 A6G coupe. In another barn sat a bespoke Talbot-Lago once owned by King Farouk of Egypt, as well as other classics dating back to the 1900s. The Maserati sold for $2.2 million. The Ferrari was sold as is by Artcurial for a whopping $18.5 million. 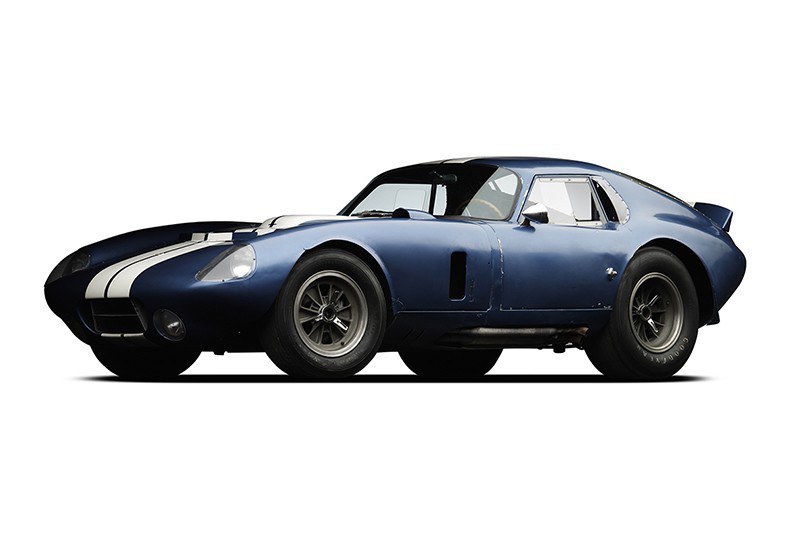 The story of one of the most famous American race cars of all time is too long and complicated to repeat with any justice here. But here’s the gist of it: After winning the 12 Hours of Sebring in 1964, surviving a near-catastrophic fire, and setting 25 land speed records at the Bonneville Salt Flats, the first of six Daytonas was sold by Carroll Shelby to the owner of a slot car company. From there, it passed through the hands of infamous music producer Phil Spector, to his property manager, and finally into the storage locker of the manager’s daughter, Donna O’Hara, in the early ’70s, where it effectively disappeared.

After O’Hara’s mysterious death in 2001, word spread fast about the long-lost icon. Several buyers pounced on the family at once. A years-long legal battle ensued, involving the family, Spector, world-famous neurosurgeon Frederick Simeone, and a lawyer from of OJ Simpson’s “dream team,” among others.

Today, the car sits in a lightly reconditioned state at the Simeone Automotive Museum in Philadelphia. The first car ever to be named to the National Historic Vehicle Register, Simeone paid a reported $4 million for the Daytona. Today, it could be worth 10 times that. 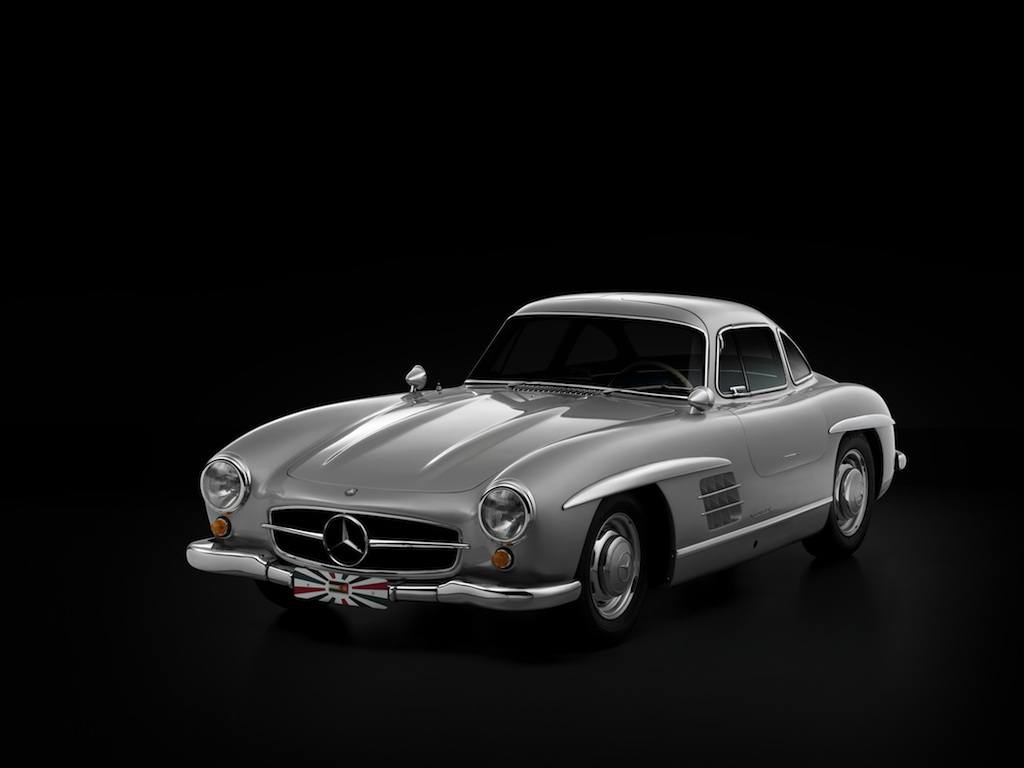 In the 1950s, the Mercedes 300SL was about as close to a supercar as you could get. Achingly beautiful, incredibly fast, and technologically advanced, the 300SL is one of the most sought-after collector cars in the world. But the most desirable cars are the 29 alloy-bodied competition cars. Built for racing, they featured a lighter body, plexiglass windows, revised suspension, and bigger brakes.

This car was given to the original owner as a college graduation present in 1955. He drove it sparingly until the early ’70s when a mechanical issue forced it into a garage. Nearly 40 years later, it was unearthed and sold for an undisclosed sum to a collector, who restored it to as-new condition. While we don’t know how much they paid, Concours-level restored cars are worth over $6 million today.