Bernanke Interview: A Retrospective on Crisis and Fed Policy 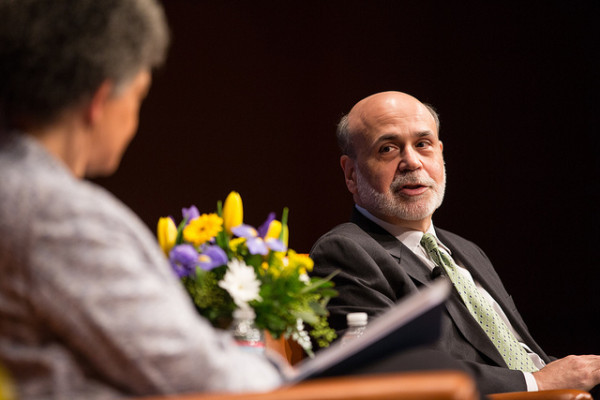 “You know if you’re in a car wreck or something, you’re mostly involved in trying to avoid going off the bridge, and then later on you say ‘Oh my God!’” That is how the former Chair of the Federal Reserve, Ben Bernanke, characterized his reaction to the financial crisis. Bernanke says he was oriented on solving the problem before him, only later was he able to understand what happened.

Bernanke made his comment and gave other views on the financial crisis and monetary policy, during the launch of the Brookings Institution’s Hutchins Center on Fiscal and Monetary Policy. He began by discussing the financial crisis. The period of the crisis was not “of equal intensity,” and it was not continuous over its year and a half duration, Bernanke stated. The markets were intensely stressed in the fall of 2007 and in March 2008.

The Fed remained alert, and there was a brief period of hope following Bear Stearns, but the “real intense phase” began in early September of 2008. Bernanke believes that began the period of “greatest stress and greatest risk” for Fed policy.

In terms of actions taken by the Fed, the interventions with failing firms garnered the most attention, but there was a great deal of good work the Fed did that went “under the radar.” The interventions occupied most of the Fed’s time, however, the other work was of equal importance. This included initiatives to stabilize key financial markets, strengthen the commercial banking system, and collaborations with foreign partners.

Bernanke explained that he is totally supportive of the limitations in Dodd-Frank. The emergency loan provisions and interventions happened because there were no guidelines. The Fed only had the standard bankruptcy code. Dodd-Frank “provided [a] much more structured and flexible approach.” As a result of the legislation, there are tools now, and the provisions the Fed relied on are no longer needed. The key actions taken by the Fed are still possible after obtaining permission from the Treasury Secretary.

The former Chair defended the institution’s independence. The Fed was “created to address financial panics.” This is important for how the Fed acts, and was necessary during the economic crisis. He is hopeful that as people become aware of the steps that were taken, the political concerns surrounding the Fed “will wane.” Later, Bernanke said that bringing greater transparency to the Fed was one of his goals, and he thinks this has been a useful policy. During the crisis, transparency assisted not only the Fed’s dealings with other central banks, but was a way to try and make the message mainstream.

When asked about the policies the Fed embarked on to try and grapple with the crisis, Bernanke pushed back against the idea what they did was unprecedented. The policymakers took cues from the 1930s and the case of Japan. They relied on research, and mixed academic thought with experience.

Bernanke is not the first to invoke Japan when discussing the Fed’s monetary policy. In 2012, The Economist described how the Bank of Japan “pioneered” the policy in 2001. Since then, several strands of QE emerged, and policy in the U.S. fell into “credit easing.” The goal of which is to reduce the interest rate, while boosting liquidity.

Forward guidance was not novel either; instead the central bank tried to “build on what others had done.” Bernanke agreed that both forward guidance, and quantitative easing were controversial. “We were at the limits of what conventional monetary policy could do,” Bernanke stated. This led the bank to “take additional steps” in order to stabilize the economy.

Bernanke is not concerned about the policies being inflationary, given the number of tools at the disposal of the central bank. There is the potential for financial instability, and a misvaluation of assets. After what happened five years ago, the Fed is particularly attuned to this concern.

It will not be possible to gauge any time soon if there has been long-lasting damage to the economy. The declines in labor force participation began before the crisis, but part of the rate may be related to the economic downturn. There has also been a very slow increase in productivity. It is possible the crisis led to a “less rapid pace of innovation.”

In December, the unemployment rate fell to 6.7 percent. The main force contributing to the lower rate was a decrease in the labor force participation rate. Fewer people are working, or seeking employment. Bernanke said the effects would not be permanent. He expects the economy will eventually return to pre-crisis growth path, or one that is comparable.