Big Food’s M&A Craze Comes at a High Price: What Investors Should Know 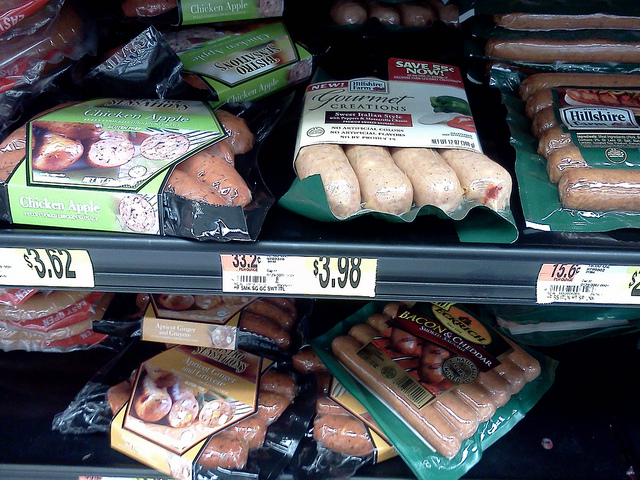 Earlier this month, we reported that Tyson Foods, Inc. (NYSE:TSN) was in the running for a takeover of meat processor Hillshire Brands Co. (NYSE:HSH); Tuesday morning, a new report from Forbes revealed that Hillshire will forgo a former offer from Tyson’s rival Pinnacle Foods Inc. (NYSE:PF) in favor of Tyson’s all-cash offer of $8 billion. Furthermore, the general consensus among industry experts is that investors can and should expect the Big Food M&A frenzy to continue, leading to the inevitable question, is it possible for Big Food to get even bigger? And what does this shift toward consolidation mean for investors and consumers alike…not to mention producers, the farmers who grow the meat and produce Big Food processes and packages.

Analysts and investors alike have been pretty enthusiastic regarding the recent industry consolidation deals, and with good reason. But as consumers, and as citizens, investors may want to take a second look at Big Food’s consolidation. The recent takeovers may be profitable in the short term, but they also harm consumers, producers and ultimately, probably investors too, in the long run.

Good or bad, experts seem to agree that the trend toward consolidation is likely to continue throughout the remainder of 2014, though it’s possible that companies may begin to find themselves under scrutiny by U.S. watchdogs, should the threat to consumers and farmers appear severe enough. “The government will be watching to see if there is enough competition in the market to allow these mergers to go through,” said Iowa State University professor of economics Chad Hart, in an interview with USA Today.

The general consensus among analysts throughout all of this has largely been that consolidation is good for investors. Louis Biscotti, a managing partner with the accounting and financial adviser firm, WeiserMazars, who spoke with CNBC in a recent interview, points out that the food and beverage industry is one of the most stable and “vibrant” industries within the U.S. economy today, making it an attractive choice for investors. Further, Biscotti adds that he believes there are enough emerging private and ethnic label brands to provide consumers with alternative choices, so consumers and watchdogs ought not to be worried.

Greg Cannon, senior vice president of U.S. Food Bank Industries concurred. “Many of these companies are small, specialty businesses that focus on a specific type of restaurant or operation,” he said, per TakePart.com. “The vast majority of are privately held and family owned, and are also experiencing generational changes. The fact that they serve niche markets makes them attractive acquisition candidates of large distributors looking to grow market share.”

Another industry expert, Ronald Hill, a professor of marketing and business law at Villanova University, says he agrees. “With little growth opportunities outside of changes in health trends…one way to experience growth, at least domestically, is to acquire other providers with the same or different product lines,” he told CNBC in an interview. Hill added that he believes there is no danger of food companies becoming too big to fail.

But is that really true? Is any industry ever truly “too big to fail?”

While larger market share and higher prices often mean money in the bank for investors in Big Food, the same phenomenon also harms consumers, who are already facing escalating food prices at the supermarket. Further, Big Food’s consolidation hurts farmers, a profession which seems to perennially get the short end of the stick. Here’s why investors may want to think twice before doubling-down on the food industry consolidation craze:

Freedom of choice? Not so much (for both the consumer and the producer)

Most investors are also consumers. And when Big Food begins to consolidate, generally consumers are faced with less choices in the supermarket. Indeed, even if all of your favorite brands still appear on shelves, the reality, as this infographic shows, is that choice is more or less an illusion when two or three companies effectively control more than 90 percent of the market, as is the case with soft drinks. Further, the top four cereal companies in America control 80 percent of the market share, while the top for beef packaging operations currently dominate about the same portion of the market; all total, about twenty companies produce most of the food eaten by Americans, including organic brands.

But consolidation affects our ability to choose what we eat in more ways than one. If industry experts are right, a report from TakePart.com adds, “consolidation could mean that fewer, larger plants will process the foods we eat. And as smaller plants shut down, small producers may be left without any nearby facilities to process their crops and animals.”

In this way, our choices are limited by Big Food’s consolidation not just through the increase in market share, but also because, as Big Food becomes bigger, other smaller producers and processors are forced out of the industry, leaving consumers with less and less options from those smaller, ethnic and niche brands Villanova’s Hill commented on at CNBC.

Higher prices at the supermarket, lower prices for farmers

Perhaps the side effect of consolidation which will have consumers most vocal is higher prices. Less competition, after all, means greater efficiency, but it also often means that companies are able to charge higher prices in the absence of former competitors. And while higher prices may be one of the most noticeable side effects of consolidation for consumers, producers are those who are likely to be most affected. As consolidation intensifies, farmers are increasingly at the mercy of just a few processors who are marketing the finished product.

And while analysts are optimistic regarding the food industry’s trend toward consolidation, agricultural analysts are increasingly worried that farmers and consumers are the ones who will be hit the hardest by the M&A frenzy, with producers getting less and less for their crops and livestock, and consumers paying more and more for its end result.

It’s hard to say how big the impact of the Big Food’s consolidation will have on consumers, but according to the Agriculture Department, consumers can expect beef and veal prices to rise by 6 percent in the next few months, and around 3.5 percent this year, per USA Today.

Consolidation, a NOFA (Northeast Organic Farming Association) report from 2006 notes, also allows companies to engage in price gouging, which has no benefit for the farmer. “Although farm milk prices are the lowest they have been since the 1970s, prices paid by consumers have not declined,” the report reads.

ICCF Wealth Management’s Doug Sheehan is one of a few analysts who question the benefits of the industry’s further consolidation. “It’s bad anytime you have competitors going away,” he told CNBC. “There will be less incentive to lower prices in stores, and that can be harmful all around. Those companies can control the market.”

Even though consumers will certainly feel the sting of Big Food’s shift toward consolidation, farmers, some experts worry, are likely to be hit the hardest of all. Don Roose, president of U.S. Commodities Inc. said in an interview with USA Today that his biggest concern is that farmers, who make their living supplying livestock, corn and other commodities to major meat and food processors will lose “crucial leverage” in negotiating prices following the further concentration of an already concentrated meat processing industry.

“If you have fewer choices as to sell to, it means you don’t have as much competition, and competition is something that usually helps” to get a better price, Roose added.

“Meat processing is already highly concentrated, and the companies trying to acquire Hillshire are two of the largest processors,” commented Chuck Grassley, a Senate Agriculture and Judiciary committee member. “If an acquisition becomes final, the Justice Department ought to scrutinize details on behalf of both consumers and family farmers with the goal of a competitive marketplace,” he added.

The evidence is in our existing agricultural system. According to the Labor Department, the average age of the American farmer is 55.9. Further, an EPA report notes that just 1 percent of the American population claim farming as their occupation, and of those, just 45 percent claimed farming as their primary occupation. Research has also suggested that between the years 1982-2007, very few young people have jumped in to take their place. Why? Often it’s because industry consolidation means that farmers are reduced to glorified serfs, begrudingly selling their livestock to a small handful of conglomerate processors for whatever price that company chooses.

“The less competition that’s out there, all those things trickle down to the producer,” said Jim Faulstich, a dairy farmer in South Dakota who milks 350 cows. “If everything was rosy up the entire food chain we probably wouldn’t be seeing potential mergers and packing plant closures. Every one of those you take out of the picture at some point is going to come back and haunt us.”

“As individual firms take greater and greater market share, and as competition in the marketplace is lost, our livestock producers and consumers get the raw end of the deal in the form of lower prices paid for livestock and higher prices at the grocery store,” Tim Johnson, a Democratic senator from South Dakota added, in an interview with USA Today.

While some analysts argue that while the consolidation spree in the meat processing sphere may be beneficial in the short term, in the long term, competition, others argue, is the real marker of a healthy economy.

“Consumers already pay attention to the nutritional qualities and environmental impacts of their food choices,” said Parke E. Wilde, a professor of Nutrition Science and Policy at Tufts University in an interview with TakePart.com, “but how many consumers think about the economic concentration of the companies they support with their food dollars?”

Instead of investing in Big Food’s consolidation, perhaps investors should keep an eye on the wealth of venture capitalist funded food startups on the market. Many of these neophyte companies have an entirely different agenda in mind, and have already lured in many investors who are eager to make money off of current societal trends away from eating meat, and toward more sustainable methods of farming and production.

According to the New York Times report, venture capitalists have good reason for buzzing about food startups. “Part of the reason you’re seeing all these V.C.’s get interested in this is the food industry is not only is it [sic] massive, but like the energy industry, it is terribly broken, in terms of its impact on the environment, health, and animals,” said John Tetrick, founder of one such startup, Hampton Creek Foods, which makes egg alternatives.

Analysts do note that for most investors, it’s best to wait on the burgeoning industry of “green” food startups. Most Americans aren’t yet able to participate, for one, as the industry is just too expensive, but perhaps the more pervasive obstacle is the fact that the industry is so new. “Start-ups are unpredictable and all these companies are trying to take advantage of new technology and markets that are changing,” said Bill Maris, a partner at Google Ventures, in an interview with the New York Times.

He says he sees these startups as being similar to YouTube and other now-infamous social media sites, back in the early ’00s: “In 2000, the same questions were asked about YouTube and no one knew if it would even work, let alone become a business.”