Boeing Wants to Become More Like Apple: Are Planes the New iPad? 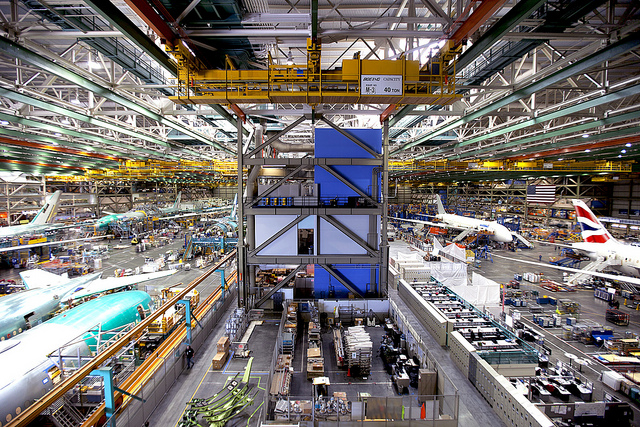 During an annual conference with industry analysts in Seattle, Boeing (NYSE:BA) CEO Jim McNerney made comments that may give a big indicator at which direction he sees his company heading in the future. During his speech, McNerney said that he wants his company to take on an approach to innovation more like that of consumer electronic maker Apple (NASDAQ:AAPL), and steer away from longer, once-in-a-generation “moon-shot” development cycles that Boeing has traditionally stuck by. According to MarketWatch, McNerney plans to take steps towards mimicking Apple’s product development strategy, saying “our mind set will be to avoid the moon-shot.” He later added, “we want to be more like Apple.”

The issue with Boeing’s currently employed development strategy is that it tends to move along at a snail’s pace. By adopting a strategy more in line with Apple’s, McNerney is looking to improve the execution of his manufacturing plants, while cutting production costs at the same time.

Boeing has taken a long-winded approach to bringing new products to the market, but that isn’t completely unexpected in the aerospace industry. Years of research and development, not to mention education and training of employees, are required to bring marketable products to the public, and just one defect could have a severe and devastating backlash. While the “moon-shot” approach to business may be outdated and delay innovation, it has worked to build Boeing into the international business power it is today.

For example, it’s fair to say Boeing’s last biggest commercial project was the Dreamliner, which still hasn’t found its legs after years of testing and re-modifications. In fact, just this week the National Transportation Safety Board recommended additional tests to the plane to ensure the batteries are up to FAA regulations, as USA Today reports. This is a prime example of the kind of issue Boeing faces when bringing new products to market, and why its pace has been much slower than businesses in other industries.

Boeing has been able to build a powerful, influential business by taking its old, methodical approach to product development. It employs thousands of engineers, designers, and installers in manufacturing plants across the country, and working with machinists unions, have been able to supply an ample number of quality jobs for many. The company has built a reputation for being trustworthy and a positive influence on local communities, while also bolstering local economies in which it holds a major presence.

McNerney could be trying to capitalize on the success Apple has had in portraying its brand name to the public. As one of America’s most beloved companies, it’s not uncommon to see lines of people outside retail locations awaiting new Apple products to be released.

Conversely, Boeing has recently been facing the brunt of mounting public impatience with many of its business practices. Notably, the company has been outed as perhaps the most blatant example of a “corporate welfare queen,” absorbing huge amounts of tax payer dollars and subsidies from the government. In fact, Boeing ranked as the top subsidy recipient of all major corporations, according to Al-Jazeera, securing 137 subsidies for a total of $13.2 billion.

Other moves have managed to turn public opinion against the company, as in a recent decision to lay off a number of workers in western Washington state, the stronghold of Boeing’s manufacturing. As reported by Everett, Washington’s HeraldNet, just months after the Washington state Legislature granted the company $8.7 billion in tax preferences to keep manufacturing jobs in the state, Boeing decided to go ahead and let a number of those workers go anyway. That $8.7 billion is the largest in American history, and the move by Boeing has certainly gotten the attention of legislatures across the country, in addition to angry residents and employees.

By taking on a strategic approach like Apple, Boeing would need to shift its focus from massive government projects that consume massive amounts of time and resources. While the projects and products the company could take on are anyone’s guess, it’s safe to assume it would probably revolve around similarly-styled aircraft, in which different models could be built around in order to optimize the development process and produce more planes.

With upcoming projects in the pipeline including building the successors to models like the 737 and A320, NASDAQ.com says new and revamped technologies aimed at producing more fuel-efficient aircraft won’t be decided upon for a long time. Those innovations could lead to big savings, not only for Boeing, but for taxpayers who foot the bill for the Department of Defense, which is one of Boeing’s largest customers.

This would be a similar approach to what Apple does, by creating an innovative product like the iPad, and then releasing annual updated versions or different variations, like the iPad 2 and the iPad Air. By putting in most of the work upfront, Apple sets itself up for continual growth by redesigning and tweaking the technical specifications to meet new demand. If Boeing were able to capitalize on a similar workflow, there’s no telling what the skies could look like in a decade or two.

By adopting a new strategy closer to that of Apple, Boeing is making it clear that it is focused on sucking up every last cent of profit it can from its products by shaving costs and streamlining manufacturing facilities, as explained by Reuters. Having been the focus of increasing public and legislative scrutiny of late, trying to give the company a more consumer-friendly face, much like Apple has done, certainly couldn’t hurt either. While it’s unclear how exactly the measures Boeing plans to take will ultimately effect its products and business, an attempt at ramping up production and innovation time is admirable. For now, everyone will need to wait and see what exactly the “Applization” of the aerospace industry looks like.