Boomtown: The State of U.S. Energy Production in 4 Charts 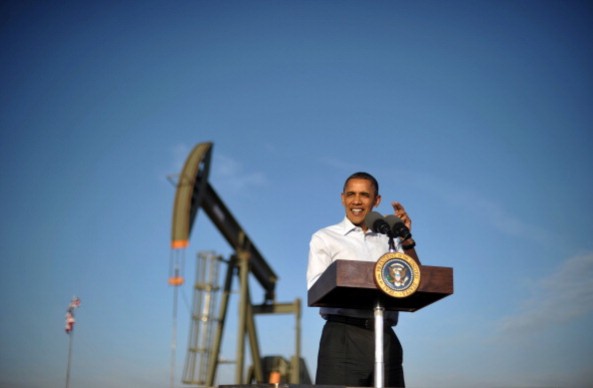 Energy is the backbone of the American economy. Without reliable, reasonably-priced sources of energy, economic systems the world over would eventually grind to a halt. For many years, the biggest point of contention in the United States, particularly when it comes to foreign policy, is based around the production or securing of cheap and plentiful energy sources. The American involvement in the Middle East is the most pointed example of this, with several conflicts even over the past two or three decades being motivated in large part by the strategic placement of oil reserves in the region.

However, with new innovation and technological advancement, American energy companies have been able to turn the tables over the past few years. The rapid growth of hydraulic fracturing, along with the discovery of large oil reserves within the territory of the United States has allowed the country to evolve out of its status as an energy importer, and into a more self-sustaining role. States like North Dakota, with its Bakken shale formation, have been major areas of booming growth, creating thousands of jobs along with untold wealth for extractors. The tax revenue headed to the state’s capital of Bismarck is also quite attractive to other states, who have begun exploring their own land for energy production potential.

As natural gas has become one of America’s major fuel sources from extraction successes in numerous shale formations, domestic oil production has increased to levels never before seen. It was assumed for much of the past that America simply didn’t have the vast reserves of crude oil that places like Saudi Arabia or even Canada possess, but recent developments have changed analysts’ minds. Both crude oil and natural gas production have been the major factors in the evolving of America’s energy policy.

As natural gas and oil production have grown, so have the concerns revolving around their safety and environmental impact. Thus, renewable energy has also started to see explosive growth of its own. Solar and wind energy are traditionally the most popular and easiest resources to capture, and both areas have seen climbing interest in recent years. There are also several other methods of capturing renewable and clean energy in the works, including tidal energy and the refining of biofuels. Renewable energy is still dwarfed by larger sources, like coal, but it is expected to continue growing.

Nuclear energy is also worth mentioning, as it supplies roughly 20 percent of the country’s electricity. Its growth, however, has been hampered by fears of several high-profile accidents around the world. Chernobyl and Fukishima are the most notable, and the high risks that come with nuclear power plants have made many people uneasy about the use of reactors in and around their communities.

With the exception of nuclear power, the major four sources of energy have been on the rise over the past few decades. The future of all of them, however, is uncertain. With data from the U.S. Energy Information Administration, we’ve put together four charts that dig deeper into energy trends across the four major industries.

Read on to see the charts, and the future of American energy. 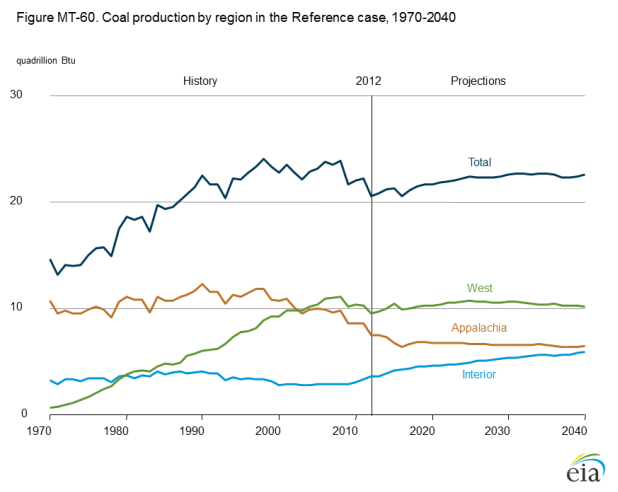 Of all the energy sources America relies heavily upon, coal is probably in the most trouble. Coal is a dirty resource, and mining it is dangerous and horribly destructive to the environment. Despite many countermeasures taken by the coal industry, including the ‘clean coal’ campaign, public opinions are turning against its use, and even president Obama has called for a 30 percent reduction in emissions from coal-fired power plants.

As seen in the chart above, production of coal is expected to stagnate, in stark contrast to the growth the industry had seen over the previous four decades. Many of the poorest states in the Appalachia region of the country are the most dependent on the coal industry, and are gearing up to fight to keep their interests intact. But the projections don’t favor coal, and the industry will need to go through a major evolution in order to maintain its position as a dominant energy source. 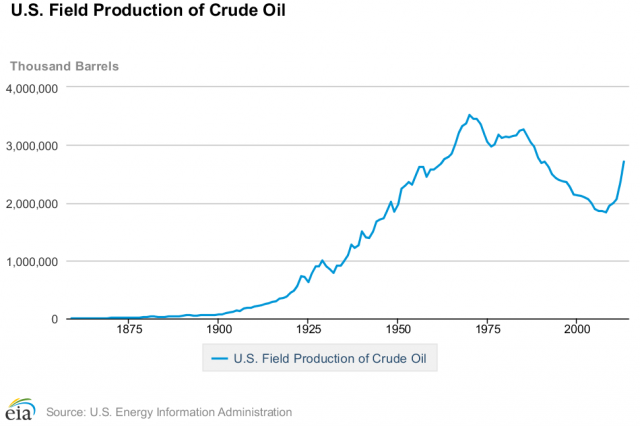 As previously mentioned, crude oil production within the United States has seen a huge push over the past few years. The chart above really demonstrates how rapid the ascent has been. It’s easy to see how production was ramped up over the 20th century, starting in 1900  and really catching the wind between 1950 and 1975. After that, production numbers saw decline all the way into 2000s.

The boom in petroleum production ha been a factor in the recovery the American economy following the recession, and surprisingly, U.S. energy companies barely have the infrastructure to keep up. CNBC reports that the country is home to less than 150 refineries, all of which are struggling to keep pace with the uptick in production. Things aren’t expected to slow down, as additional reserves are being explored and more shale reserves are being explored for extraction possibilities across the country. 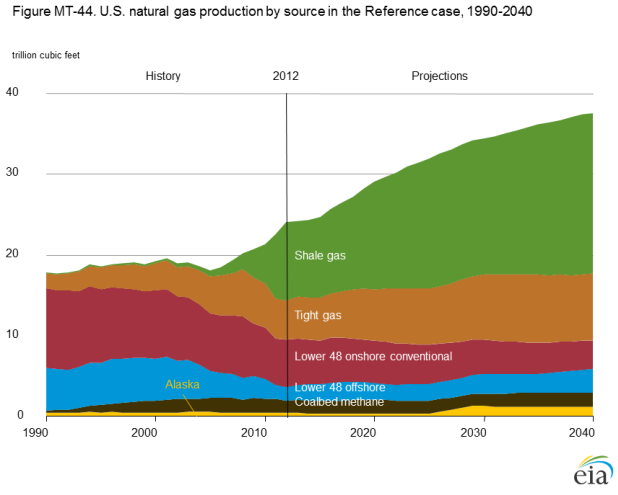 Of all the energy sources America is currently relying on, natural gas is the fastest-growing and offers the most promise. Natural gas provides certain advantages over coal and petroleum, and is often viewed more favorably in terms of its damage to the environment. Of course, it’s the method of extraction that has many people worried, as hydraulic fracturing has been shown to lead to methane leaks and earthquakes.

There are efforts underway to develop cleaner and less dangerous methods of extraction, which is good news if the U.S. plans on widespread use of natural gas well into the future. With the amount of growth in the industry, specifically shale gas as seen above, it’s hard to think the government would want to slow things down with additional regulations. As of right now, cleaning up extraction is the primary goal of the natural gas industry, as otherwise it appears to be an energy boon for the U.S. 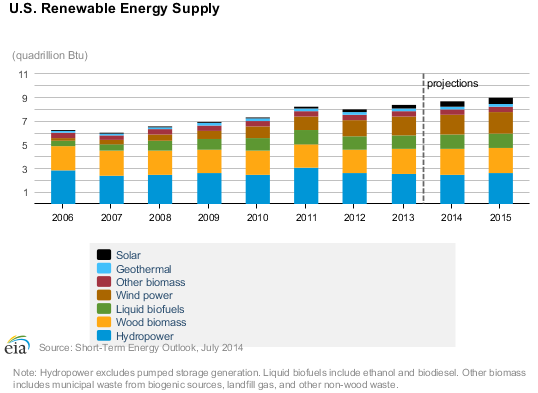 The one sector of energy production everyone is keeping a careful eye on is in renewables. The renewable energy industry encompasses a number of different energy sources, chief among them wind power, solar and hydropower. The chart above lays out the growing supply of renewables over the past decade or so, and the growth of wind and solar power is apparent. Hydropower has remained more or less the same, as dams are often giant projects to take on in order to capture energy.

Wind and solar are probably the two areas that are the most promising, as they both are starting to pick up a lot of momentum among both businesses and residents. The price of solar is dropping thanks to increased production and government-backed incentives. Wind farms are also sprouting up across the country, and the benefits of both are being seen in many communities.