Burger King’s Evolution: Why BK Won’t Go Out Like Blockbuster 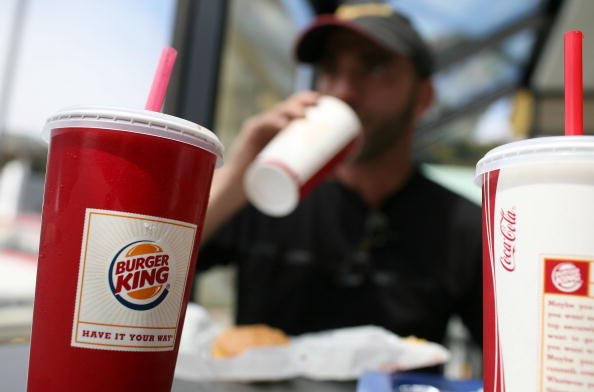 What’s one way to give an aging fast food incumbent a jolt? Hiring a young CEO with no fast food experience and applying a lean startup business methodology probably wouldn’t be the first thing that comes to mind. Yet that is exactly the path that Burger King (NYSE:BKW) has chosen to take, and it may end up paying off for the company in the long run.

Burger King is the perfect candidate for some experimentation. The fast food franchise has been slowly losing momentum for several years now – competitors like McDonald’s (NYSE:MCD) have traditionally trounced the home of the Whopper in sales and reach. But Burger King also faces competition from new sources, including companies like Starbucks (NASDAQ:SBUX) and Dunkin’ Donuts (NASDAQ:DNKN), which it may have not seen coming and therefore was not well equipped to compete with.

In the face of declining sales and shifting consumer taste trends in the fast food market, desperate times have called for desperate measures. While hiring a young CEO isn’t necessarily “desperate,” bringing on a chief executive with no experience in the business does raise some eyebrows. But perhaps Daniel Schwartz is exactly the man Burger King needs to keep its company afloat.

Hiring a 28-year-old CFO (Josh Kobza) and restructuring the company to act more like a startup are two things that may not inspire confidence in the eyes of investors, but shaking things up is the perfect prescription for getting the ailing company back on its feet.

According to an article from Bloomberg Businessweek, Schwartz has wasted no time implementing cost-saving measures and learning the ropes of the fast food industry while he’s at it. Since Schwartz took over, the company has closed 1,200 restaurants and decreased its number of corporate employees from 38,884 to a slim 2,425 as of last year.

In true startup style, Schwartz has set his sights not on traditional demographics, but on a much grander scale. He was able to negotiate agreements to open many new restaurants around the world in countries like Brazil and China. The company has actually seen the total number of operating restaurants increase by nearly 1,500 to a worldwide total of 13,667, again, according to Bloomberg. 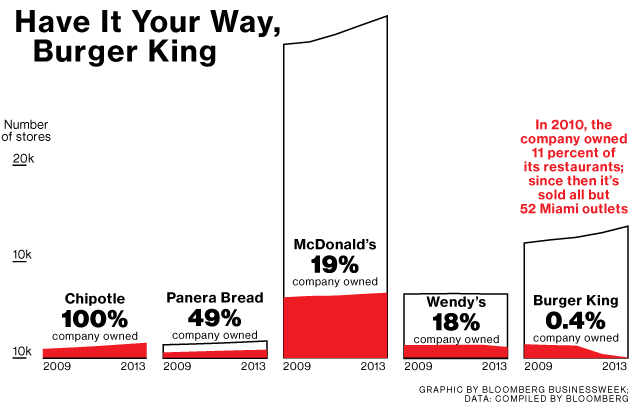 As you can see in the graph above, Burger King has made some major changes to its business model, including offloading almost all of its company-owned restaurants. This comes in stark contrast to what competitors are doing, particularly McDonald’s and Wendy’s, which have maintained a strong number of company-owned outlets for many years. Newer competition, like Chipotle (NYSE:CMG) and Panera Bread (NASDAQ:PNRA), have opted to go the opposite route and maintain a heavy corporate hand over their locations.

In Burger King’s case, the new approach is paying off.

By cutting non-performing locations, slimming its corporate headcount, setting its sights internationally, and offloading most of its corporate-owned outlets, Burger King is getting back on the track toward profitability. Sure, revenues and share prices may have suffered in the short term as a result of Schwartz’s new measures, but the future looks immensely brighter than it did even a year ago.

The data shown below, from Zacks Equity Research, show just how much of a surprise Burger King’s performance has been, particularly as the company’s second-quarter reports have recently been released. Share prices saw a small hit to the tune of 0.3 percent as investors have remained wary of slow sales in North America, but earnings per share were up 25 cents, which beat analysts’ expectations of 23 cents by 8.7 percent.

Perhaps most importantly, earnings have increased 19 percent year over year as Schwartz has implemented his plans. Along with menu reconfigurations, new marketing efforts, and measures to rebuild the company’s public image, it’s not hard to think that Burger King can easily recapture some of the fast food market it has slowly been ceding for many years now.

Maybe the most surprising aspect of Burger King’s turnaround is that it is happening in the midst of a major shift in customer tastes. As mentioned previously, there is serious headway being made by companies like Starbucks, Dunkin’ Donuts, and Chipotle in the segment, which is taking a heavy toll on the longtime fast food incumbents. This has not been a secret to McDonald’s, Wendy’s, or Burger King, all of which have remained steadfast in their operations until Burger King’s recent shakeup.

According to a recent report from The Huffington Post, Burger King was barely holding on as one of the top five fast food restaurants by sales in 2013, but that is not expected to be true in the year 2020. Analysts are expecting the influx of “fast casual” dining options to become the new norm and replace traditional burger joints in a major way.

The only exception is expected to be McDonald’s, which will most likely continue to dominate the industry due to its sheer size and scope, as well as being so ruthlessly ingrained into the worldwide business landscape. Despite that fact, even Mickey D’s will need to keep an eye over its shoulder as Subway and Starbucks lay waste to lesser competition.

That’s why what Schwartz is doing with Burger King is so important. He’s willing to take a different approach to a decaying business model and find ways to keep profitability up even as revenues may continue to slip. By taking lessons from the startup community, a fast food giant may be able to stick around, albeit in smaller form, much longer than the market would have otherwise allowed.

It seems Schwartz was taking notes from Blockbuster Video’s epic disintegration as the home video business went through dramatic changes over the past decade, and he does not plan on allowing his company to meet a similar fate.

Naturally, there’s plenty of time for things to change and for market trends to shift and shift again. But if Schwartz’s startup-style take on the fast food industry pays off, it may lead to sweeping changes across the entire business segment.

Burger King may not actually remain the king of burgers when it comes to the numbers, but with youth and new ideas at the helm, it doesn’t look like the firm is planning on completely relinquishing the crown at this time.