Can Bank of America Move Higher?

With shares of Bank of America (NYSE:BAC) trading around $15, is BAC an OUTPERFORM, WAIT AND SEE, or STAY AWAY? Let’s analyze the stock with the relevant sections of our CHEAT SHEET investing framework:

Bank of America is a financial institution serving individual consumers, small- and middle-market businesses, corporations, and governments with a range of banking, investing, asset management, and other financial and risk management products and services. With its banking and various non-banking subsidiaries throughout the United States and international markets, the company provides a range of banking and non-banking financial services and products through several business segments: consumer and business banking, consumer real estate services, global banking, global markets, global wealth, investment management, and other.

Representatives of Bank of America have asked U.S. Attorney General Eric Holder to meet with Moynihan, its chief executive officer, in an attempt to resolve differences over a possible multibillion-dollar settlement involving shoddy mortgage securities sold by the second-largest U.S. bank and its units, according to people familiar with the negotiations. Negotiators for Bank of America and the Justice Department have not met in more than a week and have no plans to do so after a flurry of meetings did not bring them close to a settlement amount, sources said. Bank of America spokesman Lawrence Grayson and Justice Department spokeswoman Dena Iverson declined to comment. Dimon, the CEO of JPMorgan Chase (NYSE:JPM), took a much-ballyhooed trip to Washington in September to meet with Holder in an effort to close a deal that would allow the largest U.S. bank by assets to put its mortgage securities problems behind it. In November, the two sides reached a $13 billion accord that Holder has said he planned to use as a template for other banks.

The meeting between JPMorgan’s top executive and the nation’s top law enforcement official was viewed as unusual at the time. Most such settlements are negotiated between a company’s lawyers and other Justice Department officials. Associate Attorney General Tony West, the No. 3 person at the agency, has been leading negotiations with Bank of America and other banks over similar investigations. The Department of Justice has not yet responded to Bank of America about the possibility of the meeting, sources said. The bank requested the meeting late last week, the people said.

The settlement is intended to resolve several investigations into the bank’s packaging of risky mortgages into securities. One probe involves Merrill Lynch, which Bank of America agreed to acquire at the height of the 2008 financial crisis. Bank of America has discussed paying about $12 billion, including more than $5 billion to help struggling homeowners, to resolve a range of federal and state probes, primarily into whether the company and its units defrauded mortgage bond investors in the run-up to the financial crisis, people familiar with the matter said. The Justice Department suggested a $17 billion settlement in the latest round of negotiations and did not view Bank of America’s offer as a serious one, one source said last week. One sticking point is what the mix of fines and relief will be, sources said. Bank of America wants more consumer relief, they said.

Bank of America stock has been moving higher in recent times. However, the stock is currently pulling back and may need time to consolidate before heading higher. Analyzing the price trend and its strength can be done using key simple moving averages. What are the key moving averages? The 50-day (pink), 100-day (blue), and 200-day (yellow) simple moving averages. As seen in the daily price chart below, Bank of America is trading between its rising key averages which signal neutral price action in the near-term. 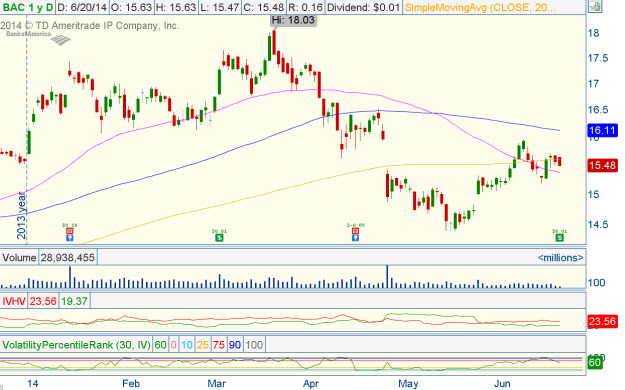 Rising stock prices are often strongly correlated with rising earnings and revenue growth rates. Also, the last four quarterly earnings announcement reactions help gauge investor sentiment on Bank of America’s stock. What do the last four quarterly earnings and revenue growth (Y-O-Y) figures for Bank of America look like and more importantly, how did the markets like these numbers?

Bank of America has seen increasing earnings and mixed revenue figures over the last four quarters. From these numbers, the markets have had conflicting feelings about Bank of America’s recent earnings announcements.

Bank of America has been a relative performance leader, year-to-date.

Bank of America is a bank and financial services giant that operates in a recovering financial industry, the backbone of the United States economy. Representatives of Bank of America have asked U.S. Attorney General Eric Holder to meet with Moynihan, its chief executive officer, in an attempt to resolve differences over a possible multibillion-dollar settlement involving shoddy mortgage securities. The stock has been moving higher in recent times, but is currently pulling back. Over the last four quarters, earnings have been increasing while revenues have been mixed, which has produced conflicting feelings among investors. Relative to its peers and sector, Bank of America has been a year-to-date performance leader. WAIT AND SEE what Bank of America does this quarter.