With shares of Comcast (NASDAQ:CMCSA) trading around $49, is CMCSA an OUTPERFORM, WAIT AND SEE, or STAY AWAY? Let’s analyze the stock with the relevant sections of our CHEAT SHEET investing framework:

Comcast and Charter Communications (NASDAQ:CHTR) said on Thursday that cable veteran Michael Willner will run the cable company that will be spun off as part of a three-way deal that hinges on regulators approving Comcast’s $45 billion takeover of Time Warner Cable (NYSE:TWC). The yet-to-be-named company that was announced on April 28 will serve 2.5 million customers in states including Indiana, Michigan and Wisconsin. The company, which will have an equity value of $5.8 billion, will be two-thirds owned by Comcast shareholders and one-third owned by Charter. Willner, 62, had a long career at Insight Communications, a cable operator that was acquired by Time Warner Cable in 2011 for about $3 billion. No former Time Warner Cable or Insight cable subscribers will be part of the new company, however.

Comcast is awaiting approval by the U.S. Justice Department and the U.S. Federal Communications Commission to take over Time Warner Cable, a process that could take many months and affect the future of cable and broadband. The spinoff depends on that deal being approved, as well as a swap of 1.6 million subscribers. Charter will have a services agreement to help manage and provide technology to the company, which will pay a fee of about 4 percent of its revenue to Charter as part of the deal. Charter has to wait at least four years before it can gain ownership control of the company, however. Besides Charter Chief Executive Officer Tom Rutledge, who will serve on the company’s board as nonexecutive chairman, no other board members have been announced yet.

Comcast stock has been trading sideways in recent times. The stock is currently pulling back and may need time to stabilize. Analyzing the price trend and its strength can be done using key simple moving averages. What are the key moving averages? The 50-day (pink), 100-day (blue), and 200-day (yellow) simple moving averages. As seen in the daily price chart below, Comcast is trading between its rising key averages which signal neutral price action in the near-term. 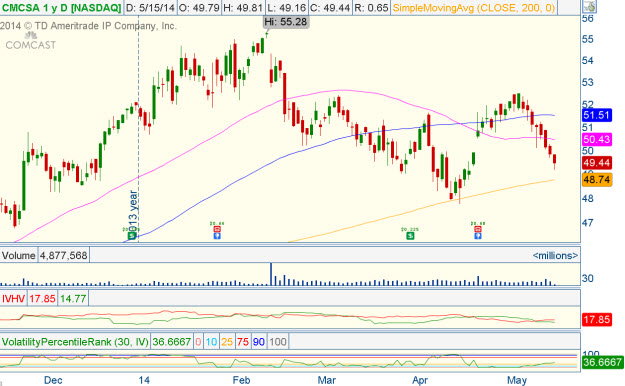 Comcast has seen rising earnings and revenue figures over the last four quarters. From these numbers, the markets have been pleased with Comcast’s recent earnings announcements.

Comcast has been a poor relative performer, year-to-date.

Comcast provides communications and entertainment products and services to consumers and companies. The company and Charter Communications said on Thursday that cable veteran Michael Willner will run the cable company that will be spun off as part of a three-way deal that hinges on regulators approving Comcast’s $45 billion takeover of Time Warner Cable. The stock has been trading sideways and is currently pulling back. Over the last four quarters, earnings and revenues have been on the rise, which has left investors pleased. Relative to its peers and sector, Comcast has been a poor year-to-date performer. WAIT AND SEE what Comcast does this quarter.