With shares of Facebook (NASDAQ:FB) trading around $59, is FB an OUTPERFORM, WAIT AND SEE, or STAY AWAY? Let’s analyze the stock with the relevant sections of our CHEAT SHEET investing framework:

Facebook is engaged in building social products in order to create utility for users, developers, and advertisers. People use Facebook to stay connected with their friends and family, to discover what is going on in the world around them, and to share and express what matters to them with the people they care about. Developers can use the Facebook platform to build applications and websites that integrate with Facebook to reach its global network of users, building personalized and social products. Advertisers can engage with more than 900 million monthly active users on Facebook — or subsets of its users — based on information they have chosen to share.

Facebook is continuing in its Johnny-come-lately routine as it prepares once more to get in the game that Snapchat has been dominating. The social media giant has tried its hand more than once and failed, but it appears it will try again with a new app, this time a little less Snapchat clone and a bit more TapTalk clone. According to sources for The Financial Times, Facebook is working on a project, codenamed Slingshot, that will function somewhat like the widely popular Snapchat app, which features limited lifespan photos, videos, texts, as well as video calls. For those familiar with Facebook’s delve into this sort of project, the Poke app might come to mind. That app also served as a Facebook’s competitor to Snapchat, but it has recently been pulled from the app stores.

In an odd reverse-reading of the saying “if you can’t beat ‘em, join ‘em,” before Facebook made Poke in attempt to challenge Snapchat head-to-head, it actually tried to buy the company. Last year, it offered Snapchat creators Evan Spiegel and Bobby Murphy $3 billion for the company. As can be plainly seen, the offer was rejected by Snapchat. This new attempt at a Snapchat-like app has been in development for several months and been overseen directly by Mark Zuckerberg, reports The Financial Times. Though the app could never see the light of day, one of the sources said it may come out as early as this month. Following the new system Facebook is implementing, it will also likely be a standalone app, rather than one that gets embedded in another of Facebook’s already popular apps.

It might seem a bit odd that Facebook keeps trying to get into that same segment of communications, but there are some pretty big reasons for it. Firsly, 700 million photos, videos, and messages are sent across Snapchat every day, reports PCMag. That’s a load of user interaction Facebook can’t just sit by and ignore. The other important thing is that Snapchat is succeeding where Facebook is failing. According to CCS Insight analyst Geoff Blaber, “Snapchat over-indexes with the very segment where Facebook has cited falling engagement: teenagers,” reports The Financial Times.

Facebook stock has struggled to make significant progress over the last couple of months. The stock is currently trading sideways and may need time to stabilize before heading higher. Analyzing the price trend and its strength can be done using key simple moving averages. What are the key moving averages? The 50-day (pink), 100-day (blue), and 200-day (yellow) simple moving averages. As seen in the daily price chart below, Facebook is trading between its rising key averages which signal neutral price action in the near-term. 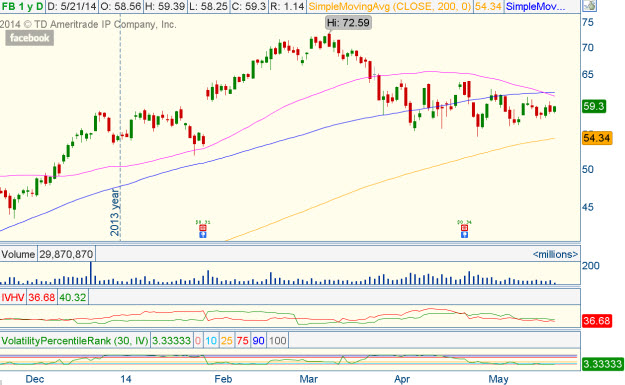 Facebook has seen increasing earnings and revenue figures over the last four quarters. From these numbers, the markets have been pleased with Facebook’s recent earnings announcements.

Facebook looks to provide a valuable social networking experience to its users, developers, and advertisers. The company is working on a project that will function somewhat like the Snapchat app. The stock has struggled to make significant progress over the last couple of months and is currently trading sideways. Over the last four quarters, earnings and revenues have been increasing, which has left investors pleased. Relative to its peers and sector, Facebook has been a relative year-to-date performance leader. Look for Facebook to continue to OUTPERFORM.