With shares of Ford (NYSE:F) trading around $16, is F an OUTPERFORM, WAIT AND SEE, or STAY AWAY? Let’s analyze the stock with the relevant sections of our CHEAT SHEET investing framework:

Ford is a producer of cars and trucks. The company also engages in other businesses, such as financing vehicles. Ford operates in two sectors: automotive and financial services. Through its sectors, Ford provides a wide range of vehicles, vehicle parts, and services to a multitude of consumers and companies worldwide. The company’s products saw declining demand in the past several years, as gasoline prices took a major toll on pockets. Ford is now revolutionizing its vehicles in order to compete on the world stage. Look for Ford to fuel a recovery in the American automobile industry and provide highly demanded vehicles, parts, and services.

If you remember, Ford ended up stuck between a rock and a hard place — aka the Environmental Protection Agency and its customers – when it was revealed that a formulaic error had seriously high-balled the expected fuel economy averages for the C-Max minivan-crossover vehicle. Originally rated for 47 miles per gallon across the board, an outcry from owners who were having trouble breaking 43 or so made Ford examine the issue to find that they were right, and the official numbers were lowered to more accurately reflect the car’s true fuel economy. The car is now rated for 45 in the city and 40 miles per gallon on the highway. Despite doing the right thing, it appears that the cut to EPA ratings has hurt the sales of the C-Max. The rating was initially tied to Ford’s Fusion Hybrid sedan, a far sleeker and more aerodynamically efficient vehicle; Ford first attributed the discrepancy to driving style, but it soon became evident that the engineering of the vehicle was at fault for the shortcoming.

“We’re definitely seeing consideration on C-Max decline over time,” the Detroit Free Press quoted Joe Hinrichs, Ford’s president of the Americas, as saying. “We need to reinvest in the product because it’s a great car.” Sales for the C-Max slid 39 percent last month. For the year, C-Max sales are down 43 percent. Ford ended up compensating owners of the C-Max for its misstated claims, announced last August. Despite the decrease, though, the C-Max still manages better fuel economy than its principal rival, the Toyota (NYSE:TM) Prius v — albeit marginally.

Ford stock has struggled to make significant progress in recent times. However, the stock is currently surging higher and looks set to continue this path. Analyzing the price trend and its strength can be done using key simple moving averages. What are the key moving averages? The 50-day (pink), 100-day (blue), and 200-day (yellow) simple moving averages. As seen in the daily price chart below, Ford is trading between its rising key averages which signal neutral price action in the near-term. 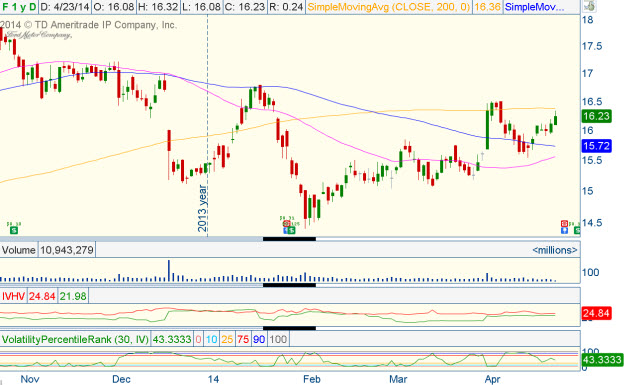 Ford has seen increasing earnings and revenue figures over the last four quarters. From these numbers, the markets have had mixed feelings about Ford’s recent earnings announcements.

Ford has been a relative performance leader, year-to-date.

Ford is a well-established vehicle products and services producer distributed in a multitude of countries across the globe. The company ended up stuck between the Environmental Protection Agency and its customers when it was revealed that a formulaic error had seriously high-balled the expected fuel economy averages for the C-Max minivan-crossover vehicle. The stock has struggled to make significant progress, but is currently surging higher. Over the past four quarters, earnings and revenues have been rising. However, investors have had mixed feelings about recent earnings announcements. Relative to its peers and sector, Ford has been a relative year-to-date performance leader. Look for Ford to OUTPERFORM.