With shares of General Motors (NYSE:GM) trading around $34, is GM an OUTPERFORM, WAIT AND SEE, or STAY AWAY? Let’s analyze the stock with the relevant sections of our CHEAT SHEET investing framework:

The attorney hired by General Motors has reportedly started meeting with a lawyer representing the plaintiffs in a suit pertaining to the company’s ignition switch recall to discuss what a potential settlement for claims would look like regardless of when the accidents occurred, Reuters reported Tuesday. Attorney Robert Hilliard is the lawyer representing more than 300 people and families with claims for injuries or deaths due to the now-recalled vehicles (all 2.59 million of them), and told Reuters that attorney Kenneth Feinberg, who is representing GM, had initiated the meeting at Feinberg’s Washington office. Feinberg, who has helped negotiate settlements and claims for events such as the BP Deepwater Horizon disaster and the September 11 attacks, acknowledged via email to Reuters that the meeting took place, but he declined further comment on the matter.

However, his validation of the meeting suggests that the company is making meaningful headway in reaching out to the affected individuals and families, at least in some aspect. The meeting seemed to be intended “to convince me they (GM) were going to do right” by people who were injured or killed as a result of the faulty switch, Hilliard told the publication, but he added that no agreement was reached on financial details. He said that would likely include General Motors assuming legal responsibility for injuries or deaths from all accidents, regardless of when they occurred, and, largely, the investigations aren’t done yet.

General Motors stock has struggled to make positive progress in the past several years. The stock is currently trading sideways and may need time to consolidate before heading higher. Analyzing the price trend and its strength can be done using key simple moving averages. What are the key moving averages? The 50-day (pink), 100-day (blue), and 200-day (yellow) simple moving averages. As seen in the daily price chart below, General Motors is trading between its rising key averages which signal neutral price action in the near-term. 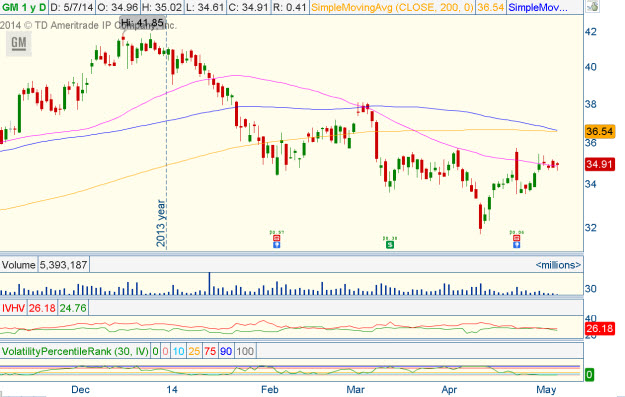 General Motors has seen decreasing earnings and increasing revenue figures over the last four quarters. From these numbers, the markets have had mixed feelings about General Motors’s recent earnings announcements.

General Motors continues to change its business as it looks to entice companies and consumers with its new and improved vehicles. The attorney hired by General Motors has reportedly started meeting with a lawyer representing the plaintiffs in a suit pertaining to the company’s ignition switch recall. The stock has struggled to make positive progress in the past several years and is currently trading sideways. Over the last four quarters, earnings have been decreasing while revenues have been increasing, which has produced mixed feelings among investors. Relative to its peers and sector, General Motors has been a poor year-to-date performer. WAIT AND SEE what General Motors does this quarter.