With shares of Google (NASDAQ:GOOG) trading around $529, is GOOG an OUTPERFORM, WAIT AND SEE or STAY AWAY? Let’s analyze the stock with the relevant sections of our CHEAT SHEET investing framework:

Google is a global technology company focused on improving the ways people engage with information. The business is based on the following areas: search, advertising, operating systems and platforms, and enterprise. The company generates revenue primarily by delivering online advertising. Google is a search giant with most of the market share, largely because of its execution and delivery. An increasing number of consumers and companies worldwide are coming online, which will surely increase the amount of eyes on the company’s ads and, in turn, advertising revenue. At this rate, look for Google to remain on top of the Internet world.

Consumer rights law firm Hagens Berman has announced a class action suit against Google, alleging that the company has participated in anti-competitive behavior that has artificially raised the price of smartphones running on Android and led to stagnation in the mobile search market. The lawsuit claims that Google is in violation of several antitrust acts and calls for the company to reimburse consumers who bought Android phones at an artificially inflated price. The suit says that Google had secret Mobile Application Distribution Agreements (MADA) with smartphone makers that required a suite of Google’s apps — including the company’s search engine, YouTube, and Google Play — to be pre-loaded onto Android phones. Those agreements, which were not meant to be public information but designated to only be seen by lawyers, have “hampered the market and kept the price of devices made by competing device manufactures like Samsung and HTC artificially high,” according to the firm.

“It’s clear that Google has not achieved this monopoly through offering a better search engine, but through its strategic, anti-competitive placement, and it doesn’t take a forensic economist to see that this is evidence of market manipulation,” said Steve Berman, the attorney representing consumers and a founding partner of Hagens Berman. “Simply put, there is no lawful, pro-competitive reason for Google to condition licenses to pre-load popular Google apps like this.”

The firm says that the mobile search market would benefit if phones running on the Android operating system were not required to use Google’s apps. Getting rid of that requirement would allow smartphone makers to choose the best mobile search engine rather than being forced to stick with Google, which would stimulate competition and force Google to keep improving its mobile search engine, instead of resting on its laurels.

Google stock has struggled to make significant progress. However, the stock is currently moving higher and looks set to continue. Analyzing the price trend and its strength can be done using key simple moving averages. What are the key moving averages? The 50-day (pink), 100-day (blue), and 200-day (yellow) simple moving averages. As seen in the daily price chart below, Google is trading between its rising key averages which signal neutral price action in the near-term. 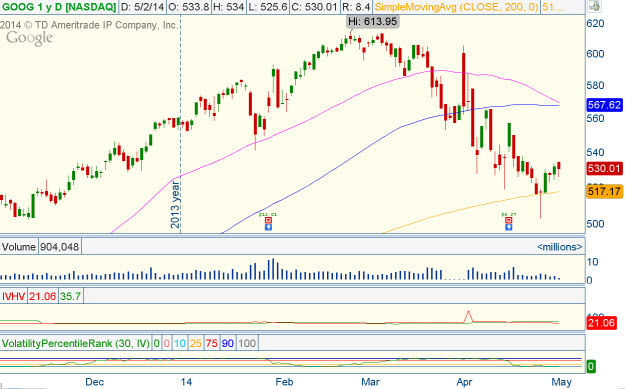 Google has seen mixed earnings and increasing revenue figures over the last four quarters. From these numbers, the markets have had conflicting feeling about Google’s recent earnings announcements.

Google has been a poor relative performer, year-to-date.

Google is an Internet giant that provides valuable search and advertising services to a growing user base worldwide. Consumer rights law firm Hagens Berman has announced a class action suit against Google. The stock has struggled to make significant progress, but is currently moving higher. Over the last four quarters, earnings have been mixed while revenues have been increasing, which has produced conflicting feelings among investors. Relative to its strong peers and sector, Google has been a weak year-to-date performer. WAIT AND SEE what Google does next.