With shares of Microsoft (NASDAQ:MSFT) trading around $40, is MSFT an OUTPERFORM, WAIT AND SEE, or STAY AWAY? Let’s analyze the stock with the relevant sections of our CHEAT SHEET investing framework:

Microsoft announced Tuesday more than one way it was going to make the Xbox One a more accessible platform for users. One was free access to a number of online features. The other was a large price reduction for the console, bringing it in-line with its major competitor, Sony’s (NYSE:SNE) PlayStation 4. While it may help some, it may not be enough. Once both Sony and Microsoft had announced the specs for their devices, it become strikingly apparent that the PS4 was more of a graphic performance powerhouse than the Xbox One. When the prices were announced, it was even more shocking that the Xbox One would be the more costly of the two. Of course, the Xbox One did come bundled with the new and improved Kinect camera for gesture- and voice-based controls as well as immersive gaming. However, not everyone wanted to shell out the extra cash for this.

As of late, the PS4 has been showing itself as the victor in the battle between these two. In both March and April, the PS4 dominated for both hardware sales and software sales. As it stood at the end of April, the PS4 had 2.93 million units sold over the Xbox One, an increase in the disparity by about a quarter-million units from the previous month. With strong pre-orders for Watch Dogs and Destiny, the PS4 appears as though it’s only going to continue racing away — especially if it can beat the Xbox into the newly opened Chinese market, where neither console has been able to sell. Acknowledging some of its sales difficulties, Microsoft is lowering the price of the Xbox to a base of $399 without the Kinect bundled in. It’s also offering free access to some popular apps like Netflix — though separate subscriptions will still be needed for some services. The price drop and free services will surely help make the console a better sell in the public eye, but the early battle for console supremacy is important, and Microsoft may have already lost.

Microsoft stock has been pulling back in recent times. The stock is currently moving higher and looks set to continue this path. Analyzing the price trend and its strength can be done using key simple moving averages. What are the key moving averages? The 50-day (pink), 100-day (blue), and 200-day (yellow) simple moving averages. As seen in the daily price chart below, Microsoft is trading above its rising key averages which signal neutral to bullish price action in the near-term. 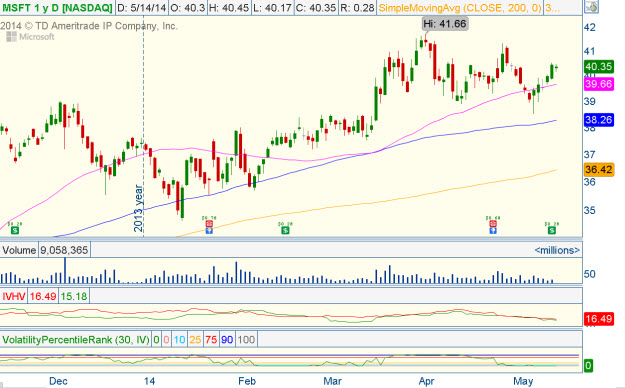 Microsoft has seen mixed earnings and increasing revenue figures over the last four quarters. From these numbers, the markets have had conflicting feelings about Microsoft’s recent earnings announcements.

Microsoft is a technology company that provides valuable software products and services to consumers and companies worldwide. The company is lowering the price of the Xbox to a base of $399 without the Kinect bundled in. The stock has been pulling back in recent times, but is currently moving higher. Over the last four quarters, earnings have been mixed while revenues have been increasing, which has produced conflicting feelings among investors. Relative to its peers and sector, Microsoft has been a relative year-to-date performance leader. Look for Microsoft to OUTPERFORM.