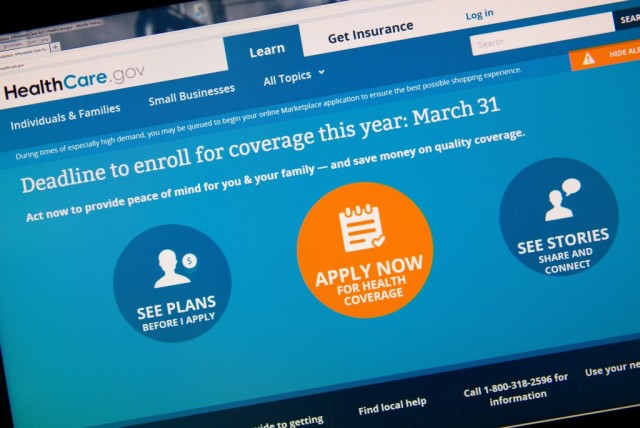 In the final months of 2014, Huffington Post blog contributor Brad Chase claimed that millennials  — the generation of Americans born between 1981 and 1997, according to Pew Research — were “openly defying” the Affordable Care Act’s mandate to purchase insurance coverage. At the time of his writing, two-thirds of previously uninsured millennials remained without coverage. What seems a condescending assessment of a generation that will soon become the largest in American society was actually a critique of how the U.S. federal government has failed millennials. The reform of the American health care system was primarily focused on making insurance coverage accessible to the 48 million uninsured Americans, a majority of whom were young adults between the ages of 19 and 34. However, there is no clear-cut answer to whether the reform has truly improved health care, and more broadly, the lives of millennials.

Critiques from the right allege that the individual insurance mandate puts an unfair burden on young Americans as “the health-care costs of older people [are passed] on to the young in the form of higher premiums,” as Diana Furchtgott-Roth and Jared Meyer wrote for the National Review. That is not incorrect. The health care reform does prohibit insurers from charging older customers premiums that are more than three times the premiums a younger customer would pay for the same coverage, meaning the premiums of millennials had to rise to balance the greater expenses of older Americans. Before Obamacare’s implementation, older customers commonly paid around five times more as they are more expensive to insure. There are a lot of politics wrapped up in criticisms of the Affordable Care Act, and perhaps the most important insight we can gain on how Obamacare has impacted millennial health care over the short-term is the affordability of the coverage.

President Barack Obama himself assured young Americans their policies would equal the cost of a monthly cellphone bill, or around $100, after subsidies were factored in. Yet, there are two additional factors to consider when determining whether Obamacare has made insurance policies more affordable for millennials and whether they can actually use that insurance.

The Obama administration knew it had to package mandated insurance as a small but necessary expense, like a phone bill. But even though annual premium increases have slowed, a large share of millennials may not have room in their budgets for another large expense after rent and student loan payments. While health insurance premiums have jumped by 196% since 1999, hourly wages for recent graduates have barely budged since the 1990s, standing at $16.35 in 1989 and $16.60 in 2012. For the many millennials working poverty-wage jobs, and the more than 18% of college-educated young adults who are underemployed, another sizable expense, even if it is just a $100-per-month premium, is just not possible. Furthermore, millennials who live in cities with extremely high costs of living, like New York City, not only face higher rents but higher insurance premiums as well.

What millennials pay for premiums fluctuate across the United States because of differences in health, income, family size, market competition, and state of residence. Premium increases can vary not only because each exchange has attracted a different number of insurers, but because states have regulated the insurance market for more than one hundred years and have developed different standards. For example, insurers operating in New York were not allowed to sell so-called bare bones plans, meaning that to adjust these plans to comply with Obamacare standards, which require insurance to cover a minimum set of benefits like maternity leave and mental health, insurers had fewer changes and fewer costs to add, unlike Ohio. 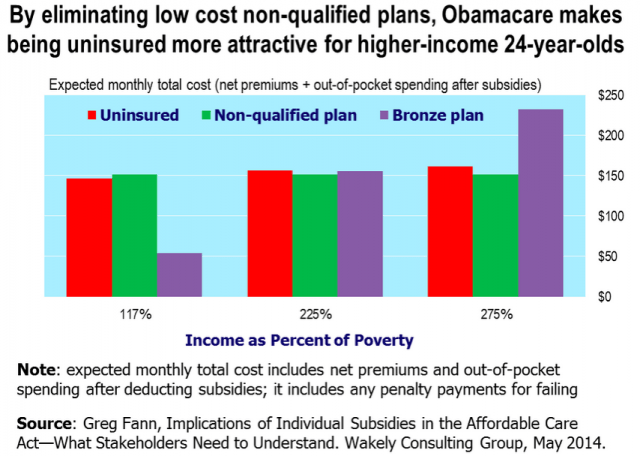 In early 2014, Scott Gottlieb and Kelly Funderburk of the American Enterprise Institute, a neoconservative think tank, examined data from four states — Arizona, Illinois, Pennsylvania, and Texas, calculating for each how much an Aetna Classic Silver plan (representing a median price point) would cost a 30-year-old at six different annual income bands: $20,000; $25,000; $30,000; $35,000; $40,000; and $45,000. According to an article Gottlieb wrote for Forbes, the findings prove millennials have Obamacare “sticker shock.”

Take for an example, a 30-year-old that earns $25,000 annually. In Arizona, that person will pay $2,424 in total monthly premiums, equivalent to 10% of their annual income, and still have a $4,000 deductible and a $5,200 cap on their out-of-pocket costs. In Illinois, that same person would pay $3,576 in annual premiums, while in Texas, the total premium bill would run $2,460. For someone earning $30,000 annually, the average salary for a pre-school teacher according to census data, premiums range from $2,772 in Arizona to $4,092 in Illinois. And both plans have a $5,000 deductible before full health coverage begins. Even for a person earning $20,000 per year, or the salary for a full-time cashier, coverage is still pricey, with annual premiums ranging from a low of $1,620 in Pennsylvania to $2,868 in Illinois. While this person qualifies for Obamacare’s cost sharing subsidies, leaving their deductible at just $600 across all four states, premiums eat up 14% of annual income.

To explain the lack of affordability in Obamacare plans for millennials, Gottlieb notes that “the health plans intentionally keep prices higher for young adults to subsidize older beneficiaries.”

It is true that in the 37 states using the federal healthcare.gov platform, more than 8 in 10 individuals qualified for an advance premium tax credit averaging $105 per month. After applying for that tax credit, around 80% of consumers could find a plan costing $100 or less per month. It has been generally assumed, especially by the Obama administration and the authors of the reform legislation, that the subsidies make insurance affordable for the average uninsured American. Monthly premium bills may look manageable, but as Gottleib’s calculations show, they amount to a large, or even unaffordable, portion of annual income.

But affording monthly premiums is not the only problem 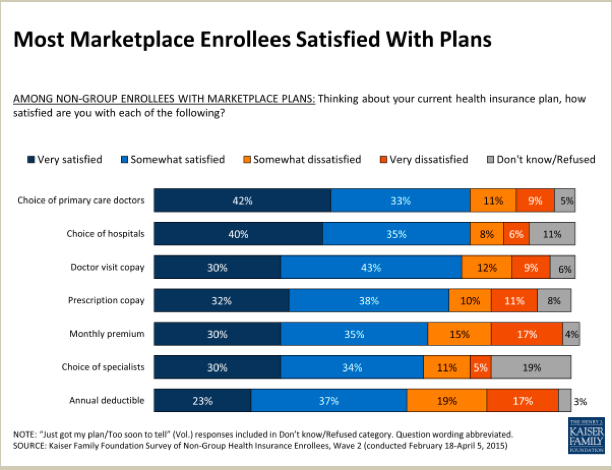 The second factor influencing whether exchange insurance policies are affordable is the deductible. Even though the Affordable Care Act prohibited annual and lifetime coverage maximums, Americans enrolled in the cheapest, bronze-level plans sold on the Obamacare exchanges need to pay more than $5,372 out-of-pocket before insurance kicks in, according to the Kaiser Family Foundation. Such high out-of-pocket caps mean that insurance customers must shell out thousands of dollars plus the monthly premium before they benefit from the coverage. Often, the once-annual penalty is about equivalent to one month’s premium bill, making it hard to justify and afford paying for a policy, especially when that policy has such a large deductible.

Authoritative measures of the public’s opinion of Obamacare from Gallup and Kaiser Family Foundation do not breakdown sentiment by age. But both measures show overall approval growing. The Kaiser poll found that 51% of marketplace enrollees hold favorable views of the law, and 72% rate coverage positively. The problem is that 56% of people with ACA-compliant plans say they are at least somewhat worried they won’t be able to afford the health care services they need, and those with higher deductibles give their coverage poorer ratings. Of the 33% who say the reform has had a negative impact on their lives, a majority reported the law increased their health care or insurance costs, while a smaller number said it made health care more difficult to get or that it caused someone in their family to lose their insurance.

How many millennials does Obamacare affect?

If Obamacare’s most basic objective was to decrease the number of uninsured Americans, data shows significant progress has been made. Even millennials are now getting covered. In fact, according to an October 2014 assessment in The New York Times, “the biggest winners from the law include people between the ages of 18 and 34.”

The provisions of the Affordable Care Act, including the individual insurance mandate and expansion of Medicaid, have reduced the number of uninsured Americans by approximately 16.4 million, according to a May 2015 report from the Department of Health and Human Services. Among that total are the 5.7 million of young adults who also gained coverage thanks to a new regulation allowing dependents to stay on their parents’ insurance policy until age 26. Before the passage of the Affordable Care Act in 2010, 30% of Americans between the ages of 19 and 29 had no coverage. But between 2010 and the end of the first three months of 2015, Gallup’s uninsured rate for 18- to 25-year-olds dropped from 23.5% to 16.8% and from 28.2% to 20.8% for 26- to 34-year-olds. These two age brackets experienced the greatest increases in coverage, and the uninsured rate for young adults is at its lowest level since 2001. Yet critics of Obamacare claim that the law encourages millennials to go without insurance because of the high cost.

Young Americans have generally disproved fears that millennials would consider themselves to be too “invincible” to need insurance. While 2014 enrollment figures for young adults failed to account for the 38% share the Obama administration targeted, millennials did account for 28% (or 1.52 million) of the final tally, and that percentage was enough to keep the insurance exchanges balanced. That percentage remained unchanged in the second enrollment period, and total young adult enrollments rose to 2.47 million.