With shares of Netflix (NASDAQ:NFLX) trading around $444, is NFLX an OUTPERFORM, WAIT AND SEE, or STAY AWAY? Let’s analyze the stock with the relevant sections of our CHEAT SHEET investing framework:

The Federal Communications Commission (FCC) wants details. The federal agency isn’t after the latest Orange Is the New Black spoiler; it wants the details of Netflix’s deals with Verizon (NYSE:VZ) and Comcast (NASDAQ:CMCSA). It also wants the details of all similar deals content providers make with Internet providers. The agency has jurisdiction over the “peering deals” as they are called. How Netflix paid Comcast so that Netflix would stream faster is a textbook example of one. Netflix and Verizon have a similar deal, but Verizon still remains one of the slowest ISPs for streaming Netflix so far. The terms of these and other peering deals have been kept secret from the public. Prompted by both of these recent deals, the FCC requested information about Netflix’s two deals and that of other peering deals.

As FCC Chair Tim Wheeler mentions the three companies by name in the news release, it’s pretty obvious that it sparked the federal interest. Wheeler said: “To be clear, what we are doing right now is collecting information, not regulating. We are looking under the hood,” said Wheeler in the release. “Consumers want transparency. They want answers. And so do I.” Google, Microsoft, Apple, Amazon, and Facebook have also made similar deals with Internet providers, reported The Huffington Post. As with Netflix’s two deals, the terms of these deals have not been made known to the general public. At the heart of this issue — although it is not mentioned by name — is net neutrality, the concept that all online data should be treated equally.

When a federal appeals court struck down the FCC’s Open Internet laws in early 2014, it set the stage for companies to start charging for Internet service in tiers based on quality and usage. Netflix has both advocated for stronger net neutrality rules and made these peering deals in an attempt to keep its service running as smoothly as possible. Netflix representatives have also met with the FCC about net neutrality. So far, the FCC has said that companies cannot deliberately degrade or otherwise slow an Internet connection, although it can offer an upgraded version of the service. The FCC has also proposed new rules that are currently in the public comment period. Many net neutrality advocates have called out Wheeler and the FCC for not doing enough to preserve net neutrality. Others have even declared it dead.

Netflix stock has been moving higher over the last couple of months. The stock is currently trading near all time highs and looks poised to continue. Analyzing the price trend and its strength can be done using key simple moving averages. What are the key moving averages? The 50-day (pink), 100-day (blue), and 200-day (yellow) simple moving averages. As seen in the daily price chart below, Netflix is trading above its rising key averages which signal neutral to bullish price action in the near-term. 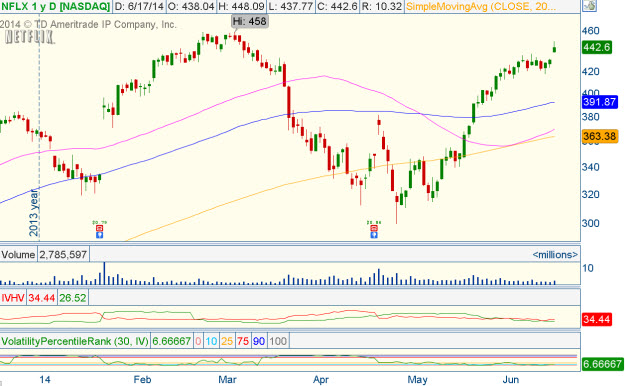 Netflix is a streaming service that provides video entertainment to consumers in the United States. The Federal Communications Commission wants the details of Netflix’s deals with Verizon and Comcast. The stock has been moving higher over the last couple of months and is currently trading near all time highs. Over the last four quarters, earnings and revenues have been rising, which has left investors pleased. Relative to its peers and sector, Netflix has been a year-to-date performance leader. Look for Netflix to OUTPERFORM.