With shares of Tesla Motors (NASDAQ:TSLA) trading around $185, is TSLA an OUTPERFORM, WAIT AND SEE, or STAY AWAY? Let’s analyze the stock with the relevant sections of our CHEAT SHEET investing framework:

Though Tesla’s Model S sedan is the part of its business that garners the brightest spotlight, the company also produces the drivetrains for a handful of other vehicles that drive under different nameplates. That list just got a bit shorter, though, as Tesla revealed that it would no longer be supplying the powertrains for Toyota’s (NYSE:TM) electric RAV4 EV. Toyota is a 2.4 percent stakeholder in Tesla. “Toyota is expected to end the current RAV4 EV model this year,” Tesla in a quarterly filing late last week. The supply contract has so far generated $15.1 million worth of revenue for Tesla in the quarter that ended at the end of March, but the company’s “production activities under this program are expected to end in 2014.”

Bloomberg reports that according to a July 2011 filing, Tesla stated that the terms for the deal with Toyota would generate about $100 million for the company. Toyota said in May 2012 that it would purchase enough powertrains to supply 2,600 RAV4 EVs over a three-year period. Toyota, though, told Bloomberg that there was no such formal announcement to end the RAV4 EV program. “This was a project for a specific number of vehicles that we planned to sell for a specific number of years,” Toyota spokesperson John Hanson said. “We have not made any announcement about the relationship or what we’ll do with Tesla in the future.” Tesla did specifically note that it was the production support for the current RAV4 EV that would be ending. Despite a new model for 2014, the RAV4 EV is still built on the older model’s platform. It’s possible that Toyota is planning to migrate its EV program to the new platform, though no whispers have yet been heard that would suggest that was the case.

Tesla Motors stock has struggled to make progress over the last couple of quarters. However, the stock is currently moving higher and looks set to continue. Analyzing the price trend and its strength can be done using key simple moving averages. What are the key moving averages? The 50-day (pink), 100-day (blue), and 200-day (yellow) simple moving averages. As seen in the daily price chart below, Tesla Motors is trading between its rising key averages which signal neutral price action in the near-term. 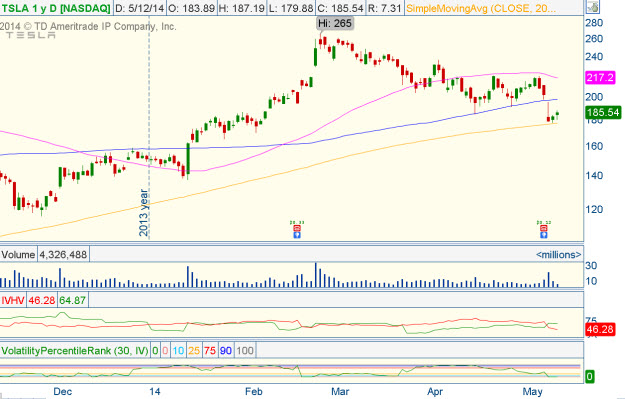 Tesla Motors has seen rising earnings and revenue figures over the last four quarters. From these numbers, the markets have been pleased with Tesla Motors recent earnings announcements.

Tesla Motors has been a relative performance leader, year-to-date.

Tesla Motors offers electric vehicles that consumers and companies are opting for over other luxury vehicles. The company revealed that it would no longer be supplying the powertrains for Toyota’s electric RAV4 EV. The stock has struggled to make progress, but is currently moving higher. Over the last four quarters, earnings and revenues have been rising, which has left investors pleased. Relative to its peers and sector, Tesla Motors has been a year-to-date performance leader. Look for Tesla Motors to continue to OUTPERFORM.