Can Toyota Motor Cruise in Your Portfolio?

With shares of Toyota Motor (NYSE:TM) trading around $109, is TM an OUTPERFORM, WAIT AND SEE or STAY AWAY? Let’s analyze the stock with the relevant sections of our CHEAT SHEET investing framework:

Toyota Motor is a Japan-based company mainly engaged in the automobile business and financial business. The company operates through three business segments: automobile, finance, and others. Through its segments, Toyota Motor designs, manufactures, and sells vehicles as well as related parts and accessories; offers financial services related to the sale of its products; and is involved in the design, manufacture, and sale of housing, information, and communication businesses. Vehicles and related products are seeing increased innovation, and Toyota Motor is at the head of this trend. Toyota has been dominating the competition and has been first to provide new technologies, so look for the company to continue innovating. 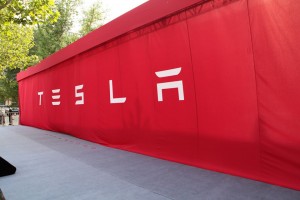 Not long ago, it was revealed through regulatory filings that the joint program between Tesla Motors (NASDAQ:TSLA) and Toyota to construct the electric RAV4 crossover vehicle had come to an end. Toyota built most of the vehicle, naturally, and Tesla unsurprisingly supplied the electric powertrains. Neither side really let on what would happen to the relationship between the two automakers once the RAV4 contracts were up, and now Toyota is hoping that it can continue working with Tesla in the future. “Tesla has quite a clear business strategy for developing a better battery,” said Osamu Nagata, president and chief executive officer of Toyota Motor Engineering & Manufacturing North America. “[Automakers] as well as suppliers need to work on developing better batteries.” Toyota is one of Tesla’s largest institutional shareholders and retains a 2.5 percent stake in the Fremont, California-based electric car maker.

Nagata made these comments to journalists in Boston, Automotive News reports. They come ahead of Tesla’s planned groundbreaking for its giant battery gigafactory next month in a location that is so far still undetermined, at least externally. The facility is expected to ramp up production of the lithium-ion battery cells that are crucial to the construction of its cars and other electric vehicles. It’s also expected to lower the cost of the cells by about 30 percent. Tesla and Toyota originally revealed their initial agreement in 2012, and it saw Tesla deliver 2,600 battery packs for use in the RAV4 EV. However, while Tesla is banking fully on plug-in electric vehicles, Toyota is heading in the direction of hydrogen fuel cells, though that setup still requires a battery of some kind. “I hope we can show the very strong capabilities of fuel cell vehicles so we can convince more and more people of the potential and possibilities of the fuel cell vehicle,” Nagata said, per Automotive News. Tesla’s CEO, Elon Musk, has been a rather vocal critic of hydrogen technologies, but Nagata took a more diplomatic approach and decided not to say whether fuel-cell technology is better than EV technology. Instead, he “proudly showed off a picture of Toyota’s FCV fuel cell vehicle that serves as the background on his cell phone,” according to Automotive News.

Toyota Motor stock has been pulling back over the last couple of quarters. However, the stock is currently surging higher and looks set to continue. Analyzing the price trend and its strength can be done using key simple moving averages. What are the key moving averages? The 50-day (pink), 100-day (blue), and 200-day (yellow) simple moving averages. As seen in the daily price chart below, Toyota Motor is trading between its rising key averages which signal neutral price action in the near-term. 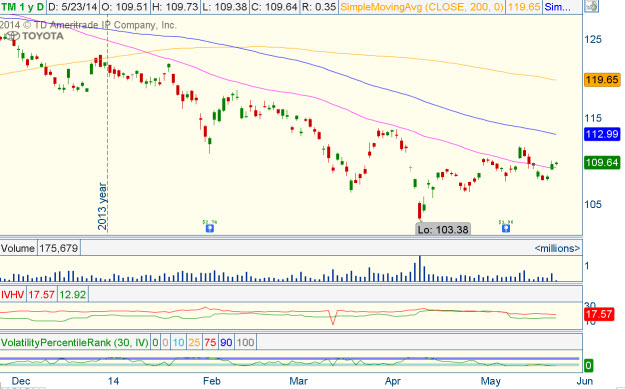 Toyota Motor has seen increasing earnings and revenue figures over the last four quarters. From these numbers, the markets have been pleased with Toyota Motor’s recent earnings announcements.

Toyota Motor has been an average relative performer, year-to-date.

Toyota Motor provides innovative vehicles and related products to consumers and companies worldwide. Not long ago, it was revealed through regulatory filings that the joint program between Tesla Motors and Toyota to construct the electric RAV4 crossover vehicle had come to an end. The stock has been pulling back, but is currently surging higher. Over the last four quarters, earnings and revenues have been on the rise, which has left investors pleased. Relative to its peers and sector, Toyota Motor has been an average year-to-date performer. WAIT AND SEE what Toyota Motor does this quarter.