Can Virtual Water Save California? 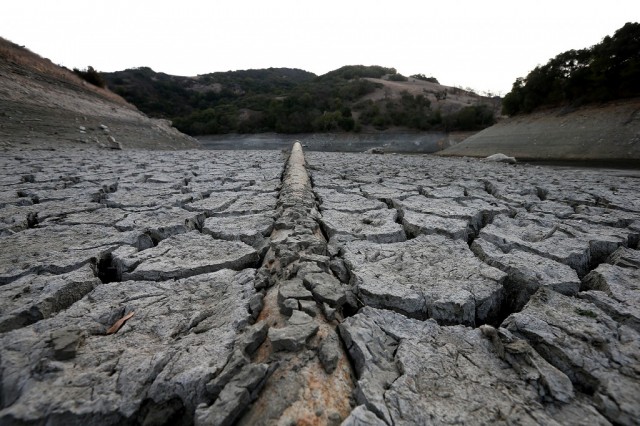 As warnings turn dire for California in its fourth year of drought, suggestions are pouring in fast from all corners. One of them comes from venture capitalist Bill Davidow and journalist Michael Malone.

In a recent Wall Street Journal column, Malone and Davidow suggest that enabling market forces to set the price of water will stem its rampant misuse and waste in California. According to them, the Golden State exports 6 trillion gallons of virtual water, or water that is used to produce crops and vegetables, by farming water-intensive (and profitable) permanent crops, such as almonds. To counter this waste, Malone and Davidow suggest a system which encourages farmers to save water by enabling them to trade it with other counties.

“Suppose an almond farmer could sell real water to any buyer, regardless of county boundaries, at market prices—many hundreds of dollars per acre-foot—if he agreed to cut his usage in half, say, by drawing only two acre-feet, instead of four, from his wells.

He would then be given an option to keep one acre-foot for his own use and sell one acre-foot at a very high price. He might have to curtail all or part of his almond orchard and grow more water-efficient crops. But he also might make enough money selling his water to make that decision worthwhile.”

As suggestions go, it is an interesting one. But its economics are flawed. For starters, the virtual water system is similar to the global carbon trading system, which enables high-polluting countries or industries to offset their bad karma in production and manufacturing by purchasing carbon credits from local or international greenhouse gas projects.

That model, as we know, is not without its flaws. One, there is the accounting problem. The EU cap-and-trade market has a surplus of 2 billion emission allowances. The surplus has resulted in reduced carbon prices.

Using the simple economics of supply and demand, this means that there is an excess supply of carbon credits in the market even though demand has been met. It follows, therefore, that carbon-emitting countries and industries have reduced their emissions or, at least, have met their targets.

Except, carbon pollution in the atmosphere has increased over the years.

The accounting problem has been further compounded by theft. In 2011, nearly half a million tonnes of carbon pollution permits were stolen from a Czech carbon bank. It is not hard to imagine a similar theft or black market in the supply of virtual water credits for local markets in California in times of drought.

There is also the problem of regulating prices in a fragmented market.

The absence of standard policies and assessments makes it difficult to devise a standardized system of measurement to assess the success or failure of such a system. In their column, the authors state that a major problem with transporting water across California counties are the numerous policies that govern such trades. The policies have resulted in multiple prices and consumption patterns for water. The problem is fairly acute.

In an earlier interview, California Gov. Jerry Brown said statewide efforts to conserve water are hampered by the “principle of subsidiarity.” According to this principle, the “primary responsibility” for water conservation lies with local authorities, and the state government can only offer subsidiary help.  Thus, Southern California, which is a desert area, trails in water conservation efforts but is among the top consumers of water.

Water as a commodity

The change in water’s status from a public utility to a tradable commodity could also signal a shift in market dynamics. The water market would not be unlike the oil market, with counties that are rich in water at an advantage compared to counties that do not have much water. It is also not difficult to imagine resulting problems, based on our experience with the oil industry. For example, cartel economics and price-fixing could easily result after making water a tradable commodity.

Finally, there is the inflation problem. Food prices have always been affected by ingredients, because a large number of subsidies are baked into its cost. This approach can lead to food inflation or a rise in food prices as water, a key ingredient in the production process, becomes more expensive. Furthermore, it could make the California economy less competitive in exports compared to the remaining states. For example, alfalfa, which accounts for 30% of the Central Valley’s output, also guzzles the most water among crops. It is mainly grown for exports to China. An expensive water regime would dissuade farmers from cultivating the crop and adversely affect exports.

This is not to say that the system of water credits is a totally bad idea. That said, the idea needs to be thought through in all its implications. “The devil lies in the details (of such a system),” the authors write in their post. Indeed it does.