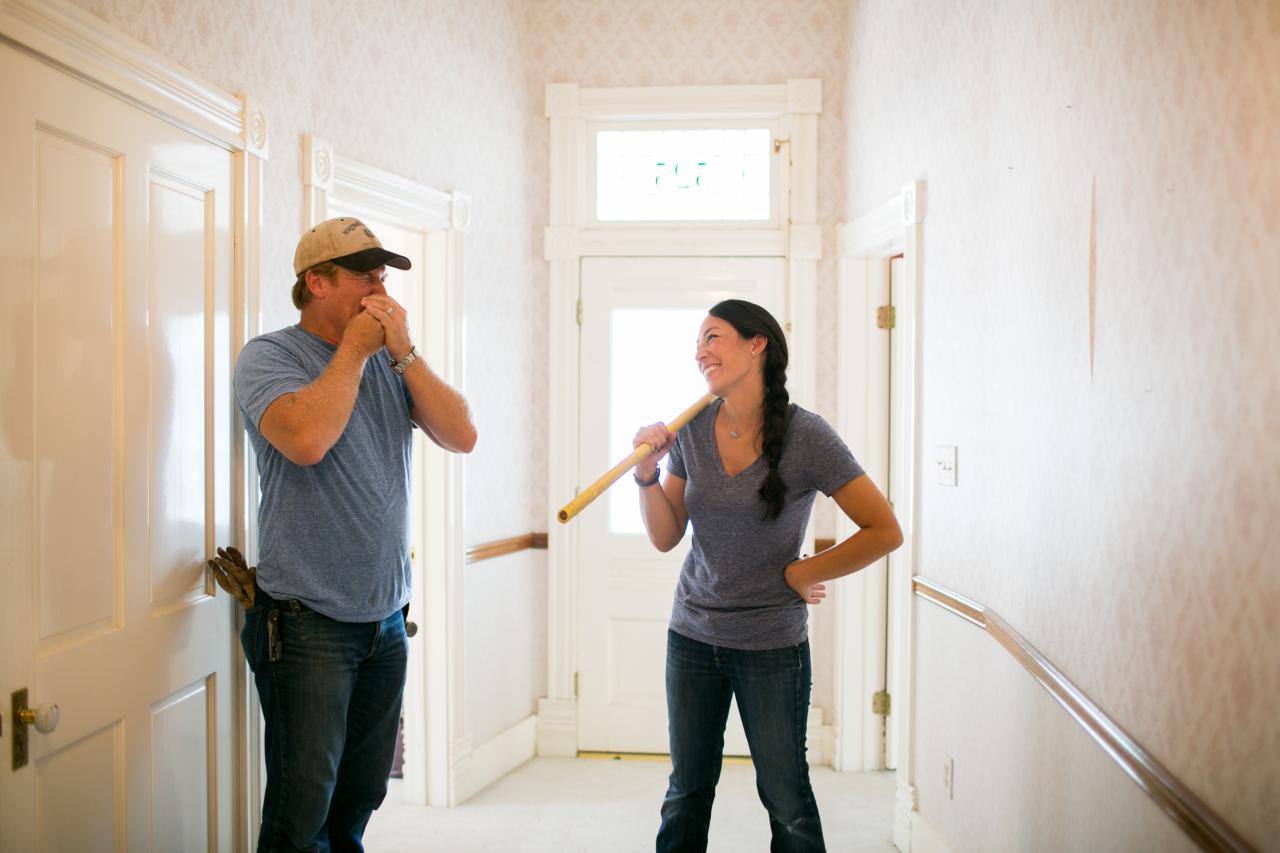 Chip and Joanna love fixing up houses, and even offer a popular rental house | HGTV.com

You may not be a celebrity, but you can live like one. The rich and famous love selling (and renting) luxury real estate almost as much as they like buying it. Provided you have the money, you can move into a home where the glitterati once slept.

You might even be able to score a relative bargain in the process. Celebrities sometimes have trouble unloading their over-the-top homes, research by Redfin has found. The real estate website looked at 60 homes celebrities bought and sold, and compared them to similar homes that weren’t purchased by famous faces. The stars’s homes not only took longer to sell, but they also tended to sell at a discount. It wasn’t unusual for celebrity homes to sell for $1 million or more under the original asking price.

Sometimes a celebrity’s home takes a while to sell because of unique design features or amenities that don’t appeal to all buyers. Showing the homes is also a problem. Stars want privacy and discretion, which means agents must be selective about who gets an up-close look at the property. Plus, eight-figure price tags mean there’s not a huge pool of buyers to choose from in the first place.

But even if you can’t buy a celebrity home, you may still be able to experience the lifestyle of the rich and famous. Celebrities who aren’t ready to sell their homes (or who can’t get the price they want) sometimes rent them out. For the few thousand dollars per week (or night), regular Joes can move in to their luxurious apartments, private islands, and estates.

Are you ready to live like a celebrity, either for night or a lifetime? From Chip and Joanna’s popular rental to Sandra Bullock’s Georgia beach house, here are 15 one-of-a-kind celebrity homes that can be yours, if you have the cash.

Fashion designer and director Tom Ford is selling his vast New Mexico ranch, just outside of Santa Fe, New Mexico. The property, which is a little over 20,000 acres (it’s larger than the entire island of Manhattan), is on the market for $75 million, according to Mansion Global. The price is steep, but what the buyer gets is pretty amazing.

The main residence was designed by award-winning Japanese architect Tadao Ando, and it floats on a large reflecting pond. There’s an adjacent state-of-the-art horse barn with indoor and outdoor riding arenas, plus two private guest houses and quarters for staff. The property also includes Silverado Movie Town, where features such as All the Pretty Horses, Thor, and Wild, Wild West were filmed. 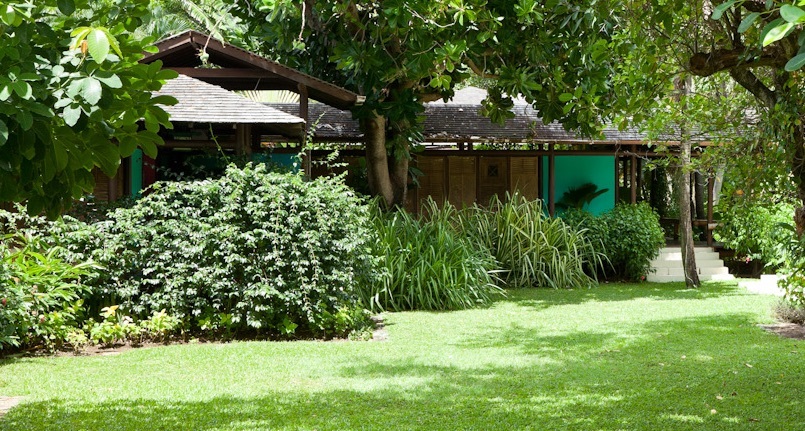 Want moves like Jagger? You could find them in Stargroves | The Mustique Company

Forget Jamaica or Antigua. When the elite want to escape to the Caribbean, they head to private island retreats like Mustique, home to Mick Jagger’s Stargroves estate. The home is one of 100 villas on the 1,400-acre island that’s part of St. Vincent and the Grenadines. The Rolling Stones rocker’s Japanese-inspired beach compound has six bedrooms and five baths, a 25-foot pool, and comes staffed with a chef, butler, and two gardeners. The home sleeps 10 and overlooks L’Ansecoy Bay, according to Variety. 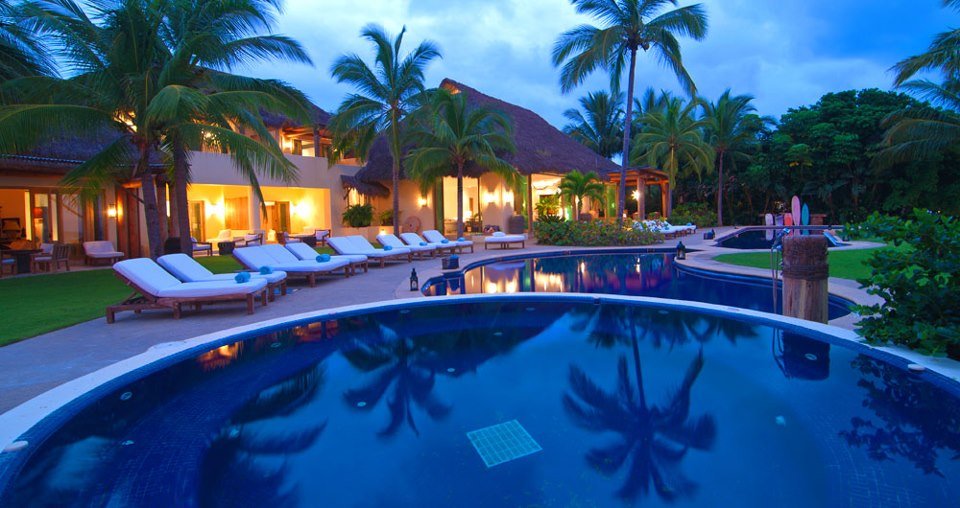 You can turn your dreams of vacationing like a Kardashian into reality when you book a stay at Casa Aramara in Punta Mita, Mexico. The sprawling, 12-bedroom beachfront retreat was built by Girls Gone Wild founder Joe Francis and is a popular getaway for the Kardashian-Jenner clan, as well as other celebrities like Ciara and Russell Wilson.

Amenities include on-site chefs, a private beach, a 24-hour butler and concierge service, a fitness center, a state-of-the-art media room, and fireworks shows on request. There’s also an “anything” button on all the phones, which promises to deliver “anything you can think of, anytime you want it, anywhere you want.” 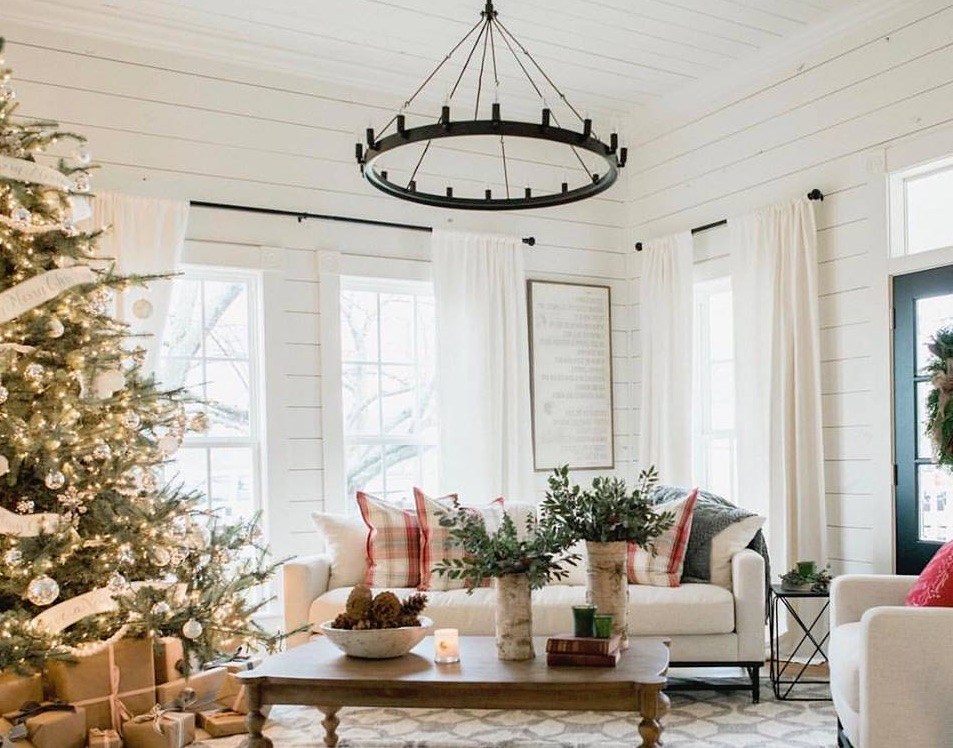 Fixer Upper addicts don’t have to relocate to Waco, Texas to get a taste of Chip and Joanna Gaines’s signature style. The couple transformed this charming Victorian home in McGregor (just outside of Waco) into a stylish, welcoming retreat that sleeps eight. The Magnolia House is already booked through 2017 (all available dates sold out in just five minutes, according to People), but they’ll start taking reservations for 2018 in the second half of this year. If you’re lucky enough to book a stay, you’ll enjoy a picture-perfect property with a gourmet kitchen, spa-like bathrooms, cozy reading nooks, and plenty of shiplap.

A Hollywood Hills compound once owned by How I Met Your Mother star Jason Segel recently went on the market for $10.5 million, according to Zillow. The California property, which sits on a half-acre lot, features two homes and a studio, plenty of outdoor space (including a bocce court and a pool), and it even has a hidden space in the library that’s rumored to date back to the Prohibition days.

Foodies will say “oui” to this adorable French cottage once owned by legendary cookbook author Julia Child. The three-bedroom, 1,500-square-foot home, known as La Pitchoune, is just outside of Grasse in Provence. It sleeps six, and if you rent for an entire week, the kitchen comes stocked with food for your continental breakfast. Best of all, the kitchen remains almost exactly as it did when Child lived there, the New York Times reported.

Warren Buffett famously still lives in the relatively modest (by billionaire standards, at least) Omaha house he bought back in 1958. But his Nebraska abode isn’t the only one in his personal real estate portfolio. He also owns a home in Laguna Beach, California, which he recently put on the market for $11 million. He bought the house, which has ocean views, for $150,000 in 1971, the Wall Street Journal reported. Buffett and his extended family used the home as a vacation property for years, but since his first wife died in 2004, he has not spent much time there. The house has six bedrooms and seven baths.

8. The Hamptons mansion with a Jackie Kennedy connection

Documentary film buffs will instantly recognize this iconic piece of real estate. Grey Gardens is the Hamptons estate featured in the Maysles brothers’s 1975 documentary of the same name. At the time, the decaying mansion was the home of Big Edie and “Little” Edie Beale, the aunt and cousin of Jackie Kennedy Onassis. The eccentric, poverty-stricken pair were unable to maintain the family home, which they shared with numerous cats and a few raccoons. Eventually, Ben Bradlee, the executive editor of The Washington Post, and his wife bought and restored the New York house. Now, this piece of movie history is on the market for just under $20 million, according to Zillow.

A 4,100-square-foot loft owned by Meg Ryan can be yours for just under $11 million. The When Harry Met Sally star’s impeccably designed New York City, New York home features details like 12-foot ceilings, French doors, a large soaking tub in the bath, and marble countertops in the kitchen. The two-bedroom apartment’s celebrity pedigree is top notch. Ryan bought it from The Simpsons actor Hank Azaria in 2013, Zillow reported.

Frank Sinatra helped put Palm Springs, California on the map when he started vacationing there in the 1940s. His sleek 4,500-square-foot-home, designed by architect E. Stewart Williams, is a classic example of the city’s iconic mid-century modern style. Now, the four-bedroom home in the Movie Colony neighborhood is available for vacation rentals, weddings, and private events. The property stays true to the original aesthetic, with some updates for today’s modern lifestyle, like new Viking appliances in the kitchen and wireless Internet. 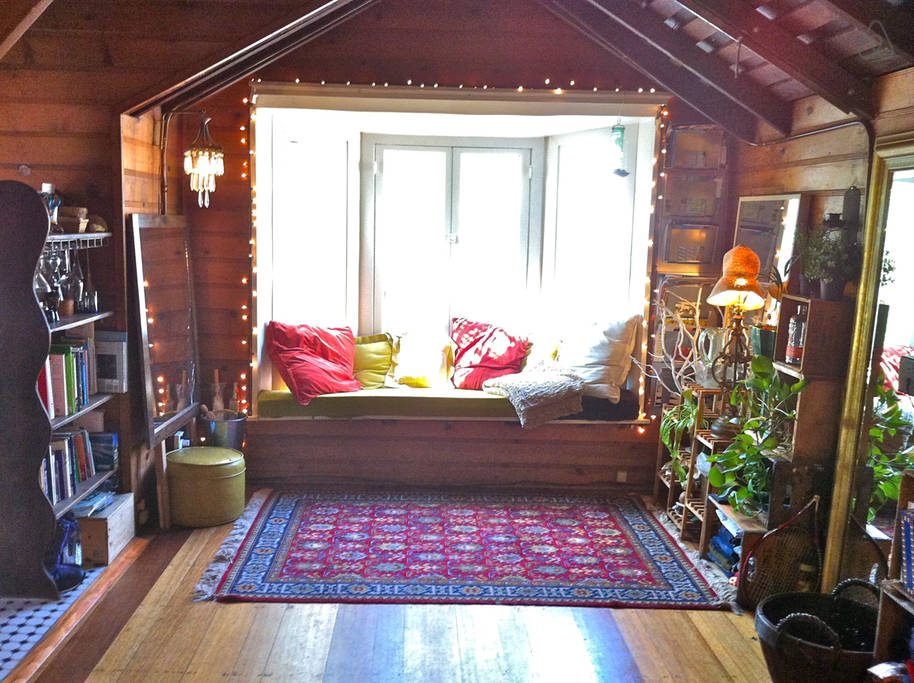 Film star Charlie Chaplin built this cute cottage in Los Angeles, California back in 1923, according to Realtor. The home, which is near the intersection of Santa Monica and La Brea, was part of a small, fairy tale-esque complex that Chaplin designed for himself and his Hollywood friends, such as John Barrymore and Mary Pickford. You can rent one of the one-bedroom units for just $200 a night on Airbnb. It even comes with a vintage gramophone. 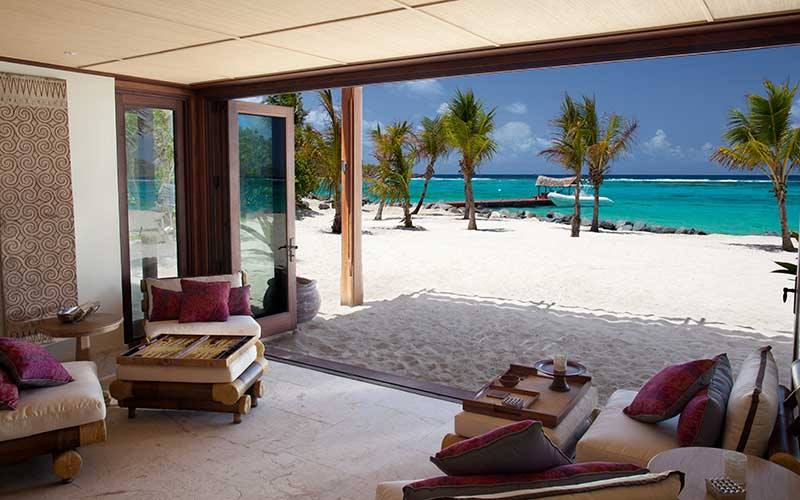 After he left the White House, Barack Obama got some much needed R&R on Richard Branson’s private Caribbean retreat in the British Virgin Islands. But you don’t need to be a former president to kick back at Necker Island. You just need $80,000. That will get you a one night stay with all meals and drinks included, a staff of 100, and much more at the billionaire’s luxury estate. There’s enough space for 34 guests, as well as two freshwater infinity pools, two tennis courts, and equipment for sailing, snorkeling, and other water sports.

Sandra Bullock owns more houses than some people do shoes, including a Tudor mansion in Beverly Hills, California, a townhouse in New York City, New York, a mansion in New Orleans, Louisiana, an Los Angeles house near the Sunset Strip (currently for rent at $15,000 per month), and at least six houses in the Austin, Texas area, according to Variety. She also owns a vacation home on Tybee Island, Georgia, which is available for rent for about $1,400 per night. The four-bedroom Elbaroda Hideway is spacious and secluded, with private beach access, a large swimming pool, a screened porch with ocean views, and other amenities. 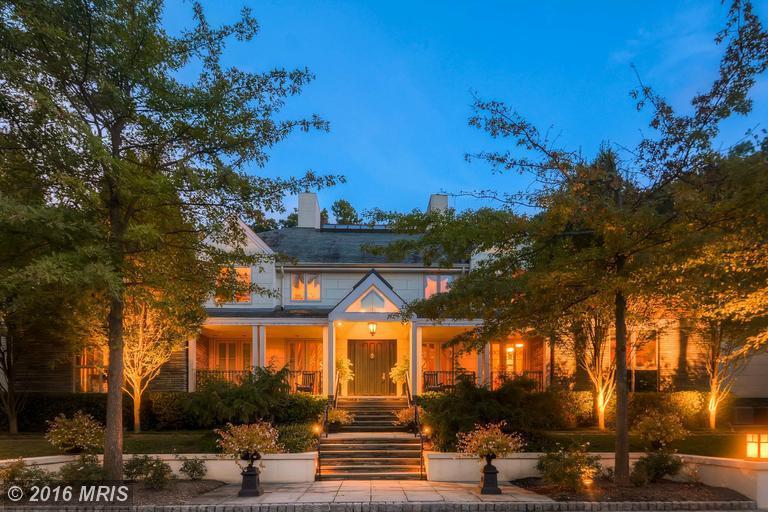 MLB hall of famer Cal Ripken is selling his Maryland mansion for $12.5 million. The six-bedroom home, which sits on a 25-acre estate in Reisterstown, was built in 1985 and renovated in the 1990s. The property features athlete appropriate amenities like a baseball-themed home theater, baseball diamond, large gym, full-size basketball court, and a professional-style locker room, according to Curbed.

The King of Pop’s secluded, 2,698-acre ranch near Santa Barbara, California, hit the market in May 2015. What was the asking price for the 12,598-square-foot French-style chateau, which has six bedrooms, three guest houses, and a massive movie theater? A cool $100 million. The nine-figure price was one reason the property was still waiting for a buyer a year later, according to Bloomberg. The ranch is also in a relatively remote location about 130 miles north of Los Angeles, and it doesn’t have extras like ocean views.

All listing information current as of February 20, 2017.