Why The Hell is CEO Pay Still This High? 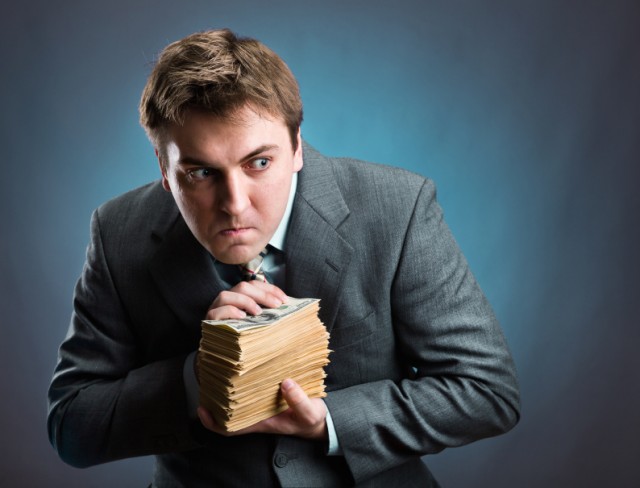 Executive pay is a topic that tends to get people riled up. There is evidence to suggest that top-earning CEOs don’t necessarily provide more bang for the buck, and even that skyrocketing executive pay can be harmful to the economy at large. But evidently, that hasn’t reversed the trend. Numbers from 2014 show that CEO pay increased yet again last year, and that there is little reason to think executive paychecks will get smaller any time soon.

These are the findings of the AFL-CIO, which released its annual Executive Paywatch summary for 2014 showing that CEO pay, on average, increased 16% last year. That made for a $13.5 million salary for the average S&P 500 Index CEO — a far cry from the $36,000 average for the average production and non-supervisory worker. As for the CEO-to-worker pay ratio, it now stands at 373:1 for every dollar earned.

“America faces an income inequality crisis because corporate CEOs have taken the raising wages agenda and applied it only to themselves,” said AFL-CIO President Richard Trumka in a press release. “Big corporations spend freely on executive perks and powerful lobbyists to strip rights from workers, but when it comes to lifting up the wages of workers that make their companies run, they’re nowhere to be found.”

Trumka’s words carry some weight, and are backed up by at least some amount of evidence. We’ve seen some significant strides to strip unions of their power, and significant backlash against calls for minimum wage increases as well, for starters. Even as more and more attention is being paid to the widening inequality gap, there has been little traction and few victories for workers. In fact, we know that the ranks of the 99% are set to swell even larger, as the the richest 1% in the world will control more than half of the world’s wealth by next year.

All told, it means more for the few, and less for the many.

The genesis of the inequality problem, as the AFL-CIO explains, is rooted in many different causes but mostly is problematic in stagnant wage growth. As executive pay has grown by leaps and bounds, the wages for average, middle class workers has barely gone up at all — and in some cases, real wages have actually declined.

The AFL-CIO’s Trumka says that represents a transfer of wealth from the lower and middle classes to the top.

“Too often workers are seen as costs to be cut, rather than assets to be invested in,” Trumka said. “Americans deserve better from those who have earned so much off the backs of working men and women, and we must start by adding transparency to the CEO pay process and requiring companies disclose their CEO-to-median employee pay ratios.”

Pointing to the vast rift between worker and CEO pay does bring attention to the issue, but does little in terms of helping solve the issues facing the American economy. It’s hard to actually blame individual executives as well, unless of course they are using their earnings to influence policy or enact legislative action to further their own interests. But for most of them, they are simply being paid what the market bears — they’re maximizing their earnings, just as any other worker would do.

On a larger scale, it’s easy to point the finger at a handful of big businesses for exacerbating income inequality as well. The AFL-CIO, in this year’s release, singles out Wal-Mart as one of the more egregious examples of companies bringing in massive profits while underpaying their employees. There’s a lot of truth to that, and Wal-Mart’s practices are contrasted by the methods employed by a rival retailer, Costco.

The differences between the two are visually displayed below.

Aside from that comparison, the Executive Paywatch release also brings up the fact that Wal-Mart is being accused of retaliating against workers by closing down certain stores, and recants the experiences of a Wal-Mart employee, Tiffany. “Poverty wages force my family to receive public assistance,” Tiffany said. “Walmart doesn’t value me. I believe in working hard and that my work should be valued. This is why I will not stop fighting until Walmart commits to raising wages and begins valuing all of its workers.”

On the other end of the spectrum, the six members of the Walton family control more wealth alone than 43% of American families combined, which is a figure also included in the report. If that doesn’t get the AFL-CIO’s point across, nothing will.

The next step is to figure out a way to address the inequality gap, a task that has so far gone unchallenged. The AFL-CIO is doing a good job of pointing out the extreme disparities in wealth between certain members of the American workforce, but solutions, at this point, remain out of reach.