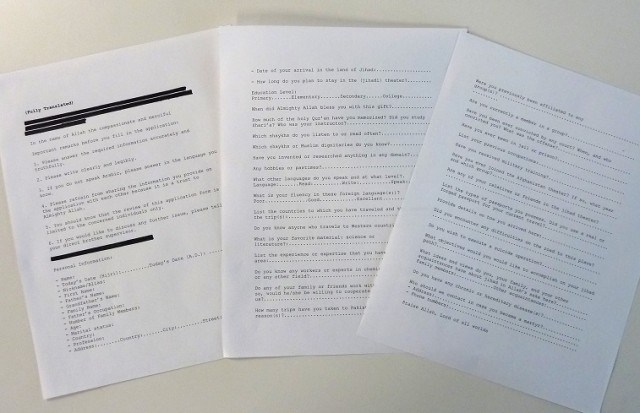 After more than $1.6 trillion in expenses for the War on Terror, the U.S. taxpayers haven’t seen much as a result. The battle against extremism in the Middle East rages on, and the situation is possibly as bad as ever. If there’s anything to be gained, it’s an inside look at how groups like ISIS or Al-Qaeda operate. The surprising thing is, they don’t operate all that different from some of the business models we’re most familiar with.

Case in point, a recent document dump from the Office of the Director of National Intelligence was rife with interesting tidbits about Al-Qaeda and Osama Bin Laden. There are lists of books that Bin Laden had on his personal bookshelf when his compound in Pakistan was raided by U.S. Navy Seals, personal correspondence between Bin Laden and family members, and a slew of other things.

Most people probably assume that a simple willingness to take up arms and join the terror group’s cause was enough of a qualification, but evidently that’s not the case. And what’s truly remarkable about the job application, as pointed out by writers at Vox, is that it is strikingly similar to many of the applications American job-seekers come across in the corporate world.

Even the instructions seem very familiar: write clearly and legibly, answer the questions truthfully, and if you have any questions or issues with the application, bring those to “your direct brother supervisor.” From there, simple background questions regarding family history, education level, and even fluency in foreign languages are listed. But there are some questions that clearly differentiate this job application from many others, such as “Date of your arrival in the land of Jihad”; “How much of the holy Qur’an have you memorized? Did you study Shari’a? Who was your instructor?”; and perhaps most different, “Who should we contact in case you became a martyr?”

If you take a minute to read through the entire application, it’s clear that even terror groups like Al-Qaeda — who happily send people to their deaths regularly — aren’t willing to onboard any regular Joe into their organization. The fact that Al-Qaeda is even using applications like this provides a glimpse into the complex and bureaucratic nature of the group, which is different from the stereotype that exists in Western culture of a bunch of disorganized guys hanging out in caves.

Of course, the application process may just be a screening method to see if any incoming recruits are better-fitted for certain roles, or are prepared to take on more responsibility than just cleaning AK-47s or holding the camcorder for propaganda videos. After all, every organization needs leadership and needs to attract talent. Granted, the talent Al-Qaeda is looking for differs in a huge way from a traditional business, but it’s a requirement nonetheless.

The application also hints at the fact that there are apparently so many recruits willing to join up that the group’s HR folks needed a way to keep track and sort through them all. That can be worrisome, considering that American and coalition troops have been gunning for members for nearly a decade and a half now. We know that it’s hard to keep tabs on just how big a group like Al-Qaeda is, with ebbs and flows in membership numbers.

But that doesn’t mean the organization isn’t structured, and taking its recruiting of new members seriously. If there’s anything to be learned from the release of this document, it’s that bureaucracy and organizational communication seem to be one in the same around the world. If you were to take the Al-Qaeda application, for example, and replace some of the wording and put an American company’s name across the top, it wouldn’t look significantly different.

You just wouldn’t want to get caught filling one of these out, lest you end up in a CIA black site answering some very difficult questions.