Chevron Hits an All-Time High: Is It a Buy? 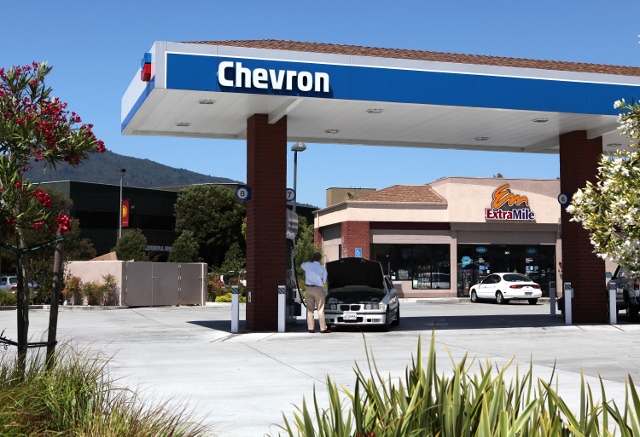 On Monday, shares of Chevron Corp. (NYSE:CVX) traded to a new all-time high of $128.80 per share. Despite this, the stock has been underperforming the broader market by about 2 percent this year. Investors have expressed bullishness toward the stock, but at the same time they are interested in higher beta growth stocks, particularly the smaller companies that are operating in the Eagle Ford and Bakken shale regions in Texas and in Montana and North Dakota.

However, with oil prices rising and uncertainty hitting the markets in the form of social unrest in Iraq, it might be time to consider a lower-risk play such as Chevron, despite the fact that it is trading at an all-time high.

But it is not trading as if it were at or near a major top. The stock trades with a modest valuation of 12.5 times trailing earnings and at 11.7 times 2014 earnings estimates. Analysts have an average price target of $132 per share on the stock, which is higher than the current price, but which is low considering the low price-to-earnings multiple and the general bullish outlook on the rest of the market. Chevron has historically been a solid investment.

First, it generates a lot of free cash flow. While this figure came down in 2012 and again in 2013, this is after a significant rise in 2009 and 2010. With the stock trading at such a low valuation, it seems that investors are expecting this negative trend to continue. But I don’t think it will. Going forward, as producing increases, the company will be growing its production, and it will begin to see the benefits of some of its larger investments made over the past few years.

Second, it invests its capital wisely throughout the globe. Chevron has a clear long-term growth plan that focuses on high-growth regions such as the North American shale regions and Asia, which is the fastest-growing region in the world. The company will also be investing in Africa and South America while scaling back in Europe. This illustrates that the company is committed to a globally diversified portfolio while remaining cognizant of the fact that the opportunities are better in some parts of the world than others. This won’t show up in earnings in the next six months, but in five to 10 years, this thinking will pay off.

Third, it returns capital to shareholders through a healthy balance of dividends and stock repurchases. This is ultimately the reason to own stocks: They allow your money to work for you by generating returns. While investors are often enamored of high-flying Internet stocks and the stocks of social media companies, they often neglect companies like Chevron that earn an incredible amount of money and use this money to reward their long-term shareholders. Chevron earned $21 billion last year and returned $12 billion of it to shareholders, leaving it with $9 billion to invest. Yet the company is worth $244 billion even with shares at an all-time high.

Chevron is a great stock to own for the long term, and it offers great value today despite the fact that it is trading at an all-time high. From a technical standpoint, it is almost never a good idea to take a position in a company when it trades at an all-time high. There are numerous short-term catalysts that can generate a short-lived selloff, although I could envision an investor with no position taking one at this valuation. Existing shareholders like myself, however, should wait for at least a small pullback.