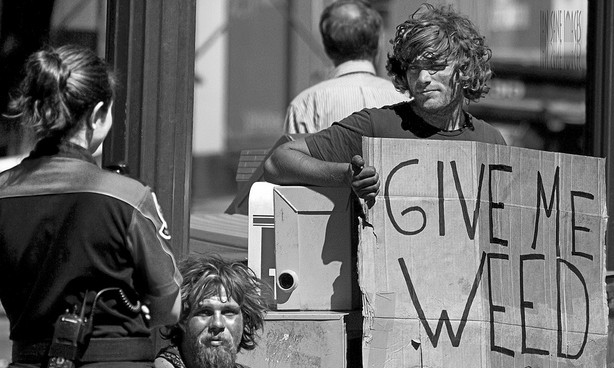 On January  1, Colorado became a social and legal laboratory for marijuana. Just 15 months after voters took to the polls to voice their opinions, the state legalized the cultivation, testing, and sale of marijuana and marijuana products. The experiment is a landmark for the anti-prohibition movement and a step toward ending America’s war on drugs.

Colorado state voters approved Amendment 64 on November 16, 2012, declaring “that the use of marijuana should be legal for persons twenty-one years of age or older and taxed in a manner similar to alcohol.” The amendment was proclaimed into the Colorado Constitution on December 10, 2012, and that same day, the state directed a special task force ”to identify the legal, policy, and procedural issues that must be resolved, and to offer suggestions and proposals for legislative, regulatory, and executive actions that need to be taken, for the effective and efficient implementation” of the amendment.

By March 2013, the task force had released its report and policy recommendations, and after after two months of consideration and revision by a select joint committee, Gov. John Hickenlooper signed the bills into law. The bills authorized the state Department of Revenue’s Marijuana Enforcement Division to regulate the retail sale of the drug.

Marijuana was legalized in Colorado in large part because of its potential to be a financial windfall for the state government and economy. Nearly a year after Amendment 64 was passed, Colorado voters passed Proposition AA outlining the taxation of Marijuana. The drug would be subject to a 15 percent excise tax “on the average market rate” and a 10-15 percent sales tax on retail sales on top of the 2.9 percent state sales tax. All state-level marijuana sales taxes also stack on top of any local government sales taxes, meaning that individual districts can charge more if they choose.

Beyond the expended revenue windfall, marijuana law enforcement costs are expected to fall — and perhaps fall dramatically. Enforcing regulations on a legal industry is, ostensibly, cheaper than combating an illegal industry. A positive economic impact for Colorado would be a compelling argument for other states interested in pursuing the recreational legalization of marijuana.

The social environment is equally as important, though, and has generally been the focus of anti-marijuana laws to date. Cannabis is currently classified as a Schedule I drug under the Controlled Substances Act, putting the substance in league with LSD, MDMA, heroin, and psilocybin. This has hamstrung the anti-prohibition movement, and the drug’s classification under federal law is a very real specter hanging over Colorado.

The marijuana debate began in earnest in 1996, when California passed the Compassionate Use Act, attempting to legalize the medicinal use of marijuana. The act ensures, among other things, that “seriously ill Californians have the right to obtain and use marijuana for medical purposes where that medical use is deemed appropriate and has been recommended by a physician.” It was the first time a state dodged the federal position and recognized legitimate medical uses for marijuana, opening the floodgates for 19 more states and the District of Columbia, which have since passed some sort of law or regulation of their own to the same effect.

However, this created a conflict of interest between state governments and the federal government. The issue came to a head in 2005, when the U.S. Supreme Court heard Gonzales v. Raich, in which a California producer of marijuana for medical use sued the government for interfering with its right to produce. (Read: The operation was shut down by the Drug Enforcement Agency.) The case addressed one inevitable issue — what happens when the federal government decides to exercise its authority over a conflicting state law? The short answer: The fed wins.

In October 2010, U.S. Attorney General Eric Holder issued a statement regarding the Department of Justice’s position on the enforcement of the Controlled Substances Act. The address was given in response to California Proposition 19, a ballot initiative due to be voted on in November of that year, which, if passed, would have legalized various — that is, recreational — uses of marijuana at the discretion and regulation of local governments.

In the statement, Holder said: “Regardless of the passage of this or similar legislation, the Department of Justice will remain firmly committed to enforcing the CSA in all states. Prosecution of those who manufacture, distribute, or possess any illegal drugs, including marijuana and the disruption of drug trafficking organizations is a core priority of the Department. Accordingly, we will vigorously enforce the CSA against those individuals and organizations that possess, manufacture, or distribute marijuana for recreational use, even if such activities are permitted under state law.”

But the situation is evolving. On August 29, Deputy Attorney General James Cole issued a memorandum regarding marijuana enforcement under the CSA.

The memorandum reads: “For states such as Colorado and Washington that have enacted laws to authorize the production, distribution, and possession of marijuana, the Department expects these states to establish strict regulatory schemes that protect the eight federal interests identified in the Department’s guidance. These schemes must be tough in practice, not just on paper and include strong, state-based enforcement efforts, backed by adequate funding.”

The memorandum continues: “Based on assurances that those states will impose an appropriately strict regulatory system, the Department has informed the governors of both states that it is deferring its right to challenge their legalization laws at this time. But if any of the stated harms do materialize — either despite a strict regulatory scheme or because of the lack of one — federal prosecutors will act aggressively to bring individual prosecutions focused on federal enforcement priorities and the Department may challenge the regulatory scheme themselves in these states.”

In the eyes of state residents, in the eyes of the government, and in the eyes of the the business sector, Colorado is a proving ground. If the legalization of marijuana can work there — if it can be produced, sold, and consumed in an economically beneficial and socially responsible way — it can be compellingly argued that it could work in other states.

Washington is on deck. The state is expected to move forward with legal retail sales sometime in 2014.