Comcast Earnings Show Cord Cutting Was Alive and Well in 2013 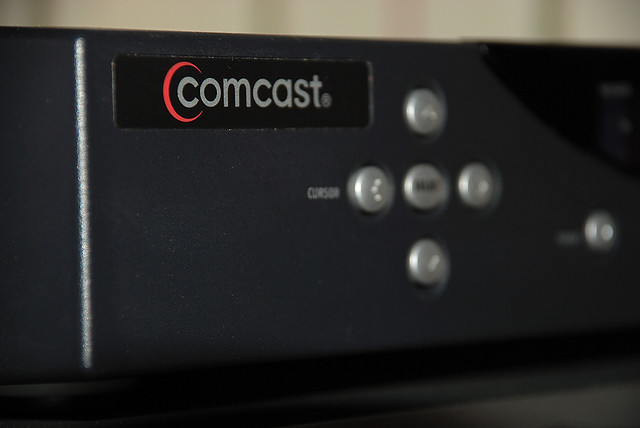 Recording a gain that would make other providers of cable television jealous, Comcast (NASDAQ:CMCSA) added 43,000 new video subscribers in the fourth-quarter — an increase that surpassed expectations for 1,600 new customers, slightly reversed the company’s loss of 129,000 video subscribers in the third-quarter, and pushed fourth-quarter profit up 26 percent. Still, the company, just like its smaller peers, relies heavily on Internet customers because subscribers to its pay-TV service are increasingly cutting the cord as Internet alternatives become more appealing and because programming costs are growing. Further boosting Comcast’s quarterly results were the 397,000 new high speed Internet customers, a figure that topped estimates for a gain of 350,000 customers.

Comcast, the largest cable television operator in the United States, attributed its fourth-quarter customer retention and higher video-on-demand spending to the increasing adoption of its X1 set-top box — a device that provides a blend of Internet content, live television, apps, a multi-tuner DVR, and on-demand programming in one clear interface.

However, the pay-TV operator was not able to beat analysts’ top and bottom line expectations. For the three month period ended December 26, Comcast reported Tuesday that net income rose 26 percent to $1.91 billion, or 72 cents per share, an increase from the $1.52 billion, or 56 cents per share, that the company earned in the year-ago quarter. Comparatively, Wall Street estimated earnings per share of 68 cents. Revenue rose 6 percent, year-over-year, to $16.93 billion, beating the $16.625  expected by analysts from Thomson Reuters.

Analysts caution investors not to read too much into the strong video subscriber numbers posted by Comcast in the fourth-quarter. It is true that the X1 platform is a key part of the company’s effort to discourage subscribers from defecting to online video streaming services like Netflix (NASDAQ:NFLX). In announcing the second iteration of the device this June, Roberts noted that, “The X1 Platform is an incredible example of what’s possible with cloud innovation.” Through the introduction of Web-based content, the company has added “more functionality to each screen in a customer’s home,” and transformed its “video product into a complete entertainment operating system.”

But problems remain. The cord cutting trend is still in progress. Cable operators have been losing market share to rival telecommunications companies and satellite competitors for many years. Plus, Comcast’s fourth-quarter results generally higher than other quarters because they benefit from the higher television use that occurs during the winter months and from the high number of college students hooking up TVs as they start school.

For the full year, Comcast still lost 305,000 video customers, ending the year with 21.7 million, while the company added 379,000 Internet subscribers to finish the year with 20.7 million.

In total, cable communications revenue rose 5.2 percent from the year-ago quarter to $10.661 billion, driven by increases in high-speed Internet, business servicesm and video. Still, gains were slightly impaired by a decline in advertising revenue. Throughout Comcast’s four other business segments, revenues also improved. NBCUniversal generated sales of $6.5 billion, a year-over-year increase of 7.5 percent that came courtesy of larger audiences for its broadcast network NBC.

Meanwhile, broadcast television revenues climbed 11.5 percent to $2.2 billion, thanks to an increase in advertising sales, which were driven by strong primetime ratings for NBC’s hits like The Voice, The Blacklist, and the NFL’s Sunday Night Football. With help from the strong performance of Despicable Me 2, the entertainment segment saw revenues grow 4.9 percent to $1.4 billion. Lastly, revenues in the theme parks segments rose 8.8 percent to $566 million, as Universal Studios’ Harry Potter attractions drew large crowds.

Alongside earnings, Comcast announced the company had raised its dividend 15 percent to 22.5 cents per share and authorized a new share repurchase program of $7.5 billion, an increase from the $1.5 billion currently authorized. While the cord cutting trend is alive and well, investors — who bid Comcast shares up 42.21 percent in 2013 — advanced the stock as much as 3 percent in pre-market trading after the fourth quarter numbers were released. Shares rose as much as 2.31 percent, hitting $53.70, after the markets opened.

No mention was made in the earnings release of Comcast’s intentions to carve up the infrastructural assets of Time Warner Cable (NYSE:TWC) — the second largest cable-TV provider — with Charter Communications (NASDAQ:CHTR), although a source told Reuters several weeks ago that such a possibility was on the table. Cable television providers are rushing toward consolidation.

That trend has little to do with designs on television might. Rather, what is at issue is cable, and the importance of that infrastructural assets is clear in the attention that Wall Street is paying the possible acquisition of Time Warner Cable. For the telecommunications companies that were once powerhouses of the cable television world, cable is the infrastructural asset that will carry them into the future. The future will have little to do with linear, old-styled video, and much to do with media streamed from the Internet. Interest in cable television is dwindling and subscribers are canceling.

The past year was the worst on record for the pay-television industry in terms of customer retention; according to research firm MoffettNathanson, 113,000 subscribers of pay-TV packages offered by cable, satellite, and phone companies canceled their service. For comparison, just 80,000 subscribers were lost during the 12-month period ended March 31, 2013. Even that figure was concerning because it marked the first time a net, industry-wide subscriber loss had been recorded for a 4-quarter period since Leichtman Research Group began tracking the data a decade ago.

At the heart of the subscriber loss is the affordability and ease of Internet-based entertainment. Interest in Internet streaming services like Comcast-owned Hulu or Netflix – which give users access to a vast library of on-demand movies and television shows — have boosted demand for broadband. While cords may being cut on cable subscriptions, cable providers and telecommunication companies added over half a million high speed Internet customers in the third-quarter.

Declining subscriber numbers have yet to hurt providers’ bottom lines, but it is clear cord cutting is becoming a trend and cable companies are already well position for the change in the industry; they have the fastest route into a majority in the United States and a deep footprint throughout the country.