The Most Common Lies We All Tell During Job Interviews

You’re a liar. That’s right, we said it. You stretch the truth. You’ve likely lied on your resume, and you’ve definitely lied during a job interview in hopes to seal the deal. While we would never condone compulsive lying, sometimes the tiny white lies people tell in interviews can benefit all parties involved.

Some lies are almost always worth the risk, while others are not. How can you discern between the two? Here are the 15 most common lies we all tell during interviews — and whether we should stick with them or lead with the truth.

Many candidates lie about salary to negotiate with their potential new employer. But hiring managers could uncover your lie by contacting your former employer or conducting simple research to see whether your claims are in line with your location and position. Either way, the lie could cost you the job.

If you feel you are underpaid and wish to break this spell, try flipping the script. Lydia Frank of PayScale tells Money that “raising the issue of fairness” can be a better strategy. She suggests saying something, such as, “This position is a little different from my old job. Can you tell me what the responsibilities would be and what you think might be a fair salary?”

Next: A lie we use to buy time

Every quick-thinking job candidate has resorted to this placating question at one time or another. A lie like this is the perfect way to stall time while trying to engage your brain for a witty answer you weren’t prepared for. Sure, in your head you believe the interview question to be pretty terrible and quite useless, but outwardly you appear calm, cool, and collected, ready to give an answer that wows.

Next: A lie we use to back up our resumes 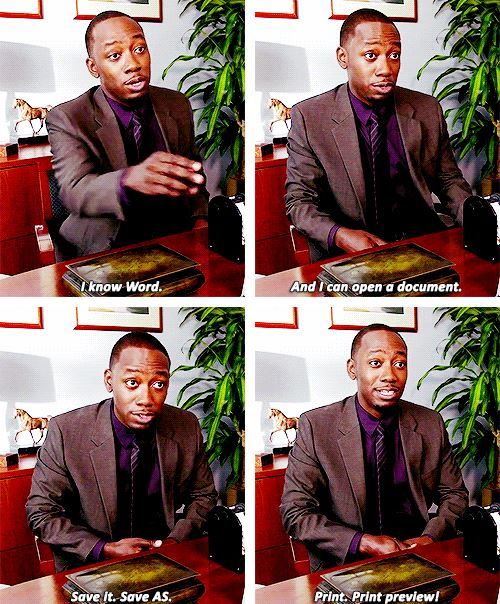 It’s safe to say embellishments surrounding your relevant skills and experiences are an all too common example of lies people tell in interviews. Unfortunately, they’re also one of the most harmful, whether it’s manipulating Excel data or boasting about your conversational Spanish skills. Employees could face interview test screens to weed out untrustworthy candidates.

These falsehoods only get you to the interview itself. After that, you’re on your own. So don’t be surprised when the interviewer asks you to rotate a PDF or navigate through Outlook before making a job offer.

Next: A lie we use to pique interest

4. ‘My interests include volunteering and traveling’

There are some things you want to keep hidden when it comes to a job interview. So when asked about your interests outside of work, you should keep it PG, even if it’s not entirely true. No one needs to know about your affinity for porcelain cat paperweights or that your weekends revolve around Netflix and online video game battles.

Instead, it’s best to mention hobbies that pertain to the company culture in question. If its charities include Habitat for Humanity, then your interests could include casual DIY projects and volunteering in the local community. How convenient.

Next: A lie we never really mean

5. ‘I’m more than willing to relocate’ 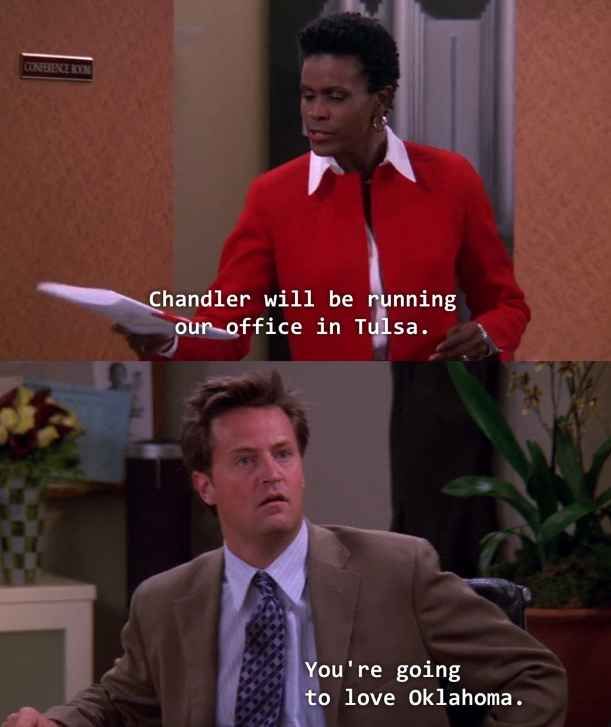 Chandler might not have been so OK with relocation on Friends. | NBC

The interview room can be overwhelming. So in a fit of panic, you hear yourself reply “Certainly!” when the team asks whether you’d be willing to relocate down the line. We’ve all been there, but don’t say it if you’re not actually prepared to do it. For one, it’s costly. Will your employer pay for it?

They likely wouldn’t ask this question during an interview if there weren’t a chance it could happen. So if you know you’re not willing to uproot your life and move elsewhere, say something, such as, “It’d be something I’d consider if the situation warranted a move.”

Next: A lie we use to seem likeable

Obviously, it’s a lie to suggest you like everyone at your office. Nobody likes everyone, and claiming so would be suspicious. Anything that could expose personality issues is something you should always work around.

So by all means, continue explaining how great the staff was at your previous company and that working with such talented people made your job a lot easier, as this statement goes a long way in showing hiring managers you can work together to reach a common goal. Communication, adaptability, and leadership are all skills you want to highlight in your interview — even if you prefer to work alone.

Next: A lie we use, so we don’t raise red flags

7. ‘Sure, you can call my references’

More companies are revving up internet sleuthing to audit their interviewees. So while your old college roommate pretends to talk you up to your old boss, know that 29% of hiring managers report catching a fake reference on a candidate’s application, and 69% say speaking with references sways their decision to hire you, according to CareerBuilder.

LinkedIn and Twitter make it easy for candidates to look up the real titles of the references you list, so it’s best to be honest with the references you provide during the interview. Lying about your references tells the company you can’t find a single employer willing to speak well of you, making this one of the absolute worst lies people tell in interviews.

Next: A lie we use for relevancy

A tiny lie — or small omission of the truth — about your previous experience can be surprisingly beneficial when interviewing for a new role. Resume writer Michelle Aikman tells Glassdoor that providing a comprehensive list of all prior work history on your resume to discuss in your interview is the wrong way to approach a new opportunity. Sometimes a targeted snapshot of related roles work better.

“My rule of thumb is to consider how important the experience is to convey your ability to do the job and whether it is absolutely critical that you communicate your qualifications or past experiences with a timeline attached to it,” Aikman says.

Similarly, if your resume is riddled with short-term employment stints or incorrigible endings with a manager, it might be better to steer clear of those instances completely. They might suggest you are unreliable to a hiring team.

Next: A lie we tell ourselves

9. ‘The commute doesn’t bother me’

Of course people say the hour commute isn’t a problem to avoid disqualifying themselves from the running. But whether this is an acceptable lie depends on how much you really want the job. The Workforce Institute found 48% people blame their commute on job satisfaction, and 32% consider the commute before choosing their current job.

If the commute is long but you deem the job title and opportunity worthy, it’s best to lie about your doubts surrounding the daily commute. If you realize the time it took to get to the interview will be even tougher during rush hour, be honest and play the interview accordingly.

Next: A lie that sounds better than the truth

People commonly cite a bad boss or poor relationships with their co-workers as the primary reason they leave their jobs. But the moment you start bad-mouthing your boss and the accompanying salary is also the moment your interviewer checks out mentally.

It’s best to tell a half truth about why you’re considering leaving your current job that paints you in a more positive light. Although it’s probably a lie, this is your opportunity to say something nice when most would expect something negative. Something, such as, “This position is the career move I’ve been waiting for, and I want to be a part of a company making big strides in the industry,” will go a lot further than “My boss’s micromanaging tendencies and the low salary wasn’t worth the stress.”

Next: A lie that snowballs into more lies 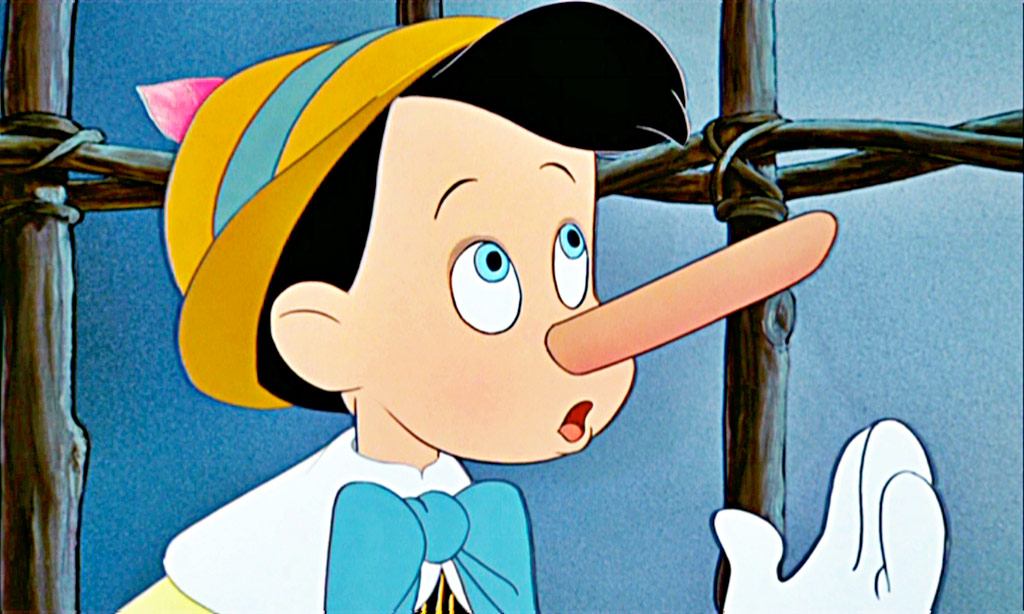 Don’t get caught in a lie. | Disney

CareerBuilder says 55% of people have embellished their job responsibilities on a resume. This often leads to a snowball of lies that are needed to further support false claims. It’s never a good idea to suggest you held more responsibility in a prior job than you actually did, as today’s employers are more likely to uncover as many details as they can about your job description and duties via references and the internet.

Exaggerated accomplishments or vague resume statements — such as “played a vital role in” or “worked with” — questions your true involvement and overall responsibilities. And when you continue such generalities in your interview, the red flags only fly higher. A quick tap into LinkedIn could expose your lie and leave the employer questioning everything else you said and did in your interview.

Next: A lie about happiness

Sure, you curse Mondays each week and often fantasize about resigning in the most epic way, but think about the end game before being completely truthful about your work-related feelings. Research says nearly a third of people over age 55 hate their jobs. But we suggest you continue lying about your unhappiness for a better shot at a new opportunity. No one wants to work with a Debbie Downer. Be that candidate they like.

Next: A lie for the CEO

13. ‘Your company mission means a lot to me’

This common lie people tell in interviews is harmful simply because of the lack of originality. Sometimes you just can’t help affiliating yourself with the company culture during the interview, but try qualifying the statement with hard facts to prove you’ve done significant research on the company. Was it just featured in a recent article? Did it secure a new partnership with a brand you’re familiar with? Does something about the CEO’s background resonate with you? These are all things that can turn this blatant falsehood into an impressive candidate initiative.

Next: But what about the most common lies hiring managers tell potential employees? Next are the two most offensive ones.

14. ‘We really value input from our employees’

Almost every HR manager tells a candidate the company C-suite really values employee input. And for a job seeker, a communicative company is a major plus — if it’s true. It’s best to probe a little deeper into these statements by asking how employees can communicate with senior staff or about an example of a time employee advice was actually considered to make sure it’s valid.

Next: A lie for the culture

15. ‘We have an amazing culture here’

Every employer loves to brag about its culture, but the proof is in the pudding. Does the company allow flexible hours? Can you telecommute? What kind of turnover does it experience, and how do current employees rate the company on public job boards? Some hiring managers assume candidates won’t fully vet a potential employer and proceed to talk up their culture as a result. Do your research to form your own opinion.