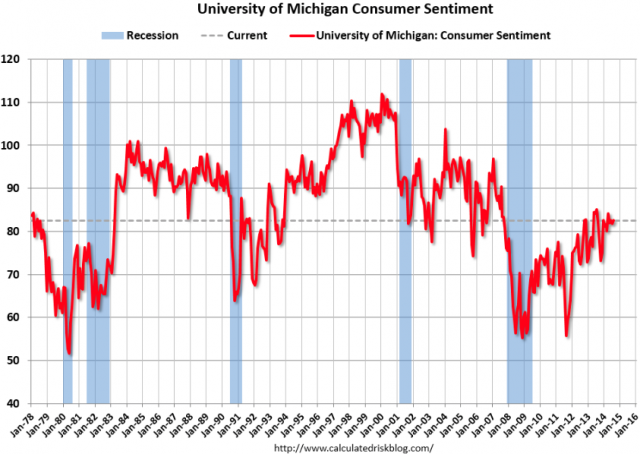 Consumer sentiment continues to show signs of life this year. After pulling back in July, the index climbed higher in August as Americans remain upbeat about current economic conditions. According to Thomson Reuters/University of Michigan’s final reading, consumer sentiment improved to 82.5 this month, compared to a preliminary reading of 79.2 and a final July reading of 81.8.

The results were better than expected. On average, economists expected the index to come in at only 80.1 in August. The consumer gauge has only posted two other monthly gains this year, which occurred in April and June. In fact, April was the highest reading for the index in nine months. In 2013, consumer sentiment ranged from a low of 73.2 in October to a high of 85.1 in July.

Despite the rise in confidence, Americans also need to see rising wages in order to sustain consumer spending expectations. “Consumer confidence rebounded in late August due to a positive reassessment of prospects for the national economy,” said survey director Richard Curtin in a statement. “A weakened trend in equity and home prices in the absence of resurgent wages would threaten the modest pace of consumer spending that is now expected.”

Current economic conditions, which measure whether Americans think it is a good time to make large investments, were better than expected and rose from 97.4 in July to 99.8 in August, its highest level since July 2007. Consumer expectations were also better then estimated but dipped to 71.3 from 71.8. Expectations have declined for four consecutive months.