Consumers Under Attack from Stagnant Wages and Inflation 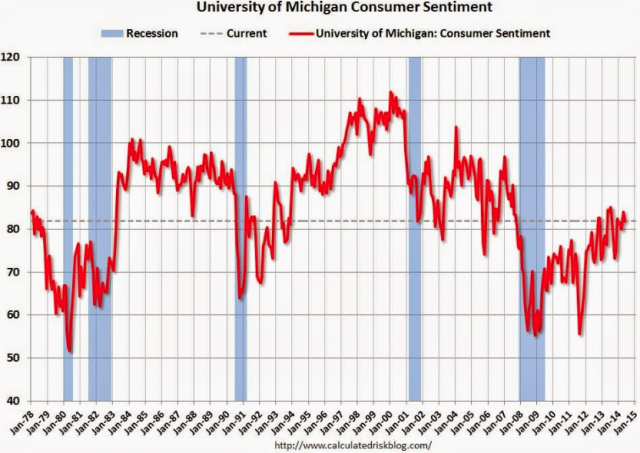 Consumer sentiment declined this month as many Americans are feeling the financial pressures of stagnant wages and higher inflation. According to Thomson Reuters/University of Michigan’s final reading, consumer sentiment dropped to 81.9 in May compared to 84.1 in April.

The results were worse than expected. On average, economists expected the index to reach 82.5 in May. The consumer gauge has only posted one monthly gain this year, which occurred in April, when the index reached its highest level in nine months. In 2013, consumer sentiment ranged from a low of 73.2 in October to a high of 85.1 in July.

“The main concern expressed by consumers involved dismal prospects for wage growth, which for nearly half of all households meant anticipated declines in inflation-adjusted incomes and living standards during the year ahead,” survey director Richard Curtin said in a statement. On the positive, Curtin notes that May’s consumer sentiment reading was above the average of 81.7 seen during the first four months of the year.

Current economic conditions, which measure whether Americans think it is a good time to make large investments, were worse than expected at 94.5, down from 98.7 in the prior month. Consumer expectations also declined to 73.7 this month from 74.7 in April.

The Commerce Department echoed the weakness seen among consumers. According to the agency, consumer spending fell in April for the first time in a year, completely surprising economists that predicted a rise. Furthermore, inflation posted its largest gain since November 2012.