Corporate America Has a Hoarding Problem 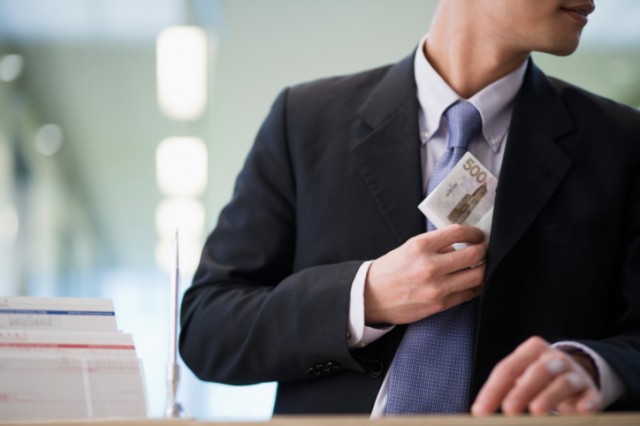 Is it any wonder where all of the economic gains have gone since the recession ended? Untaxed profits held overseas by major U.S. corporations in 2013 totaled $2.1 trillion. That’s twice as much as they had stashed in 2008, according to Reuters, and is something that hasn’t gone unnoticed by lawmakers either. “The new numbers … certainly highlight what is one of the key challenges for tax reform. I do think there need to be some reforms in this area,” said Senate Finance Committee Chairman Ron Wyden, a senator from Oregon.

So where is all of that money going? Under the mattresses — or, rather, stashed in a variety of different accounts and holdings — of business powers and the wealthiest Americans. That’s right, it’s pretty much sitting there. These companies are amassing an insane amount of liquid assets, and effectively doing nothing with it. That money, meant to spur the economy on to a new level of prosperity, is instead sitting in accounts collecting dust. It’s not being invested. It’s not being used to hire new workers, or raise wages.

In the words of the comedian Lewis Black, “What are they gonna do? Start their own space program!?”

Well, in Elon Musk’s case, the answer is yes. But at least Musk was investing his capital into a new venture, helping spur the economy along. Liquid assets sitting in foreign accounts? Those profits — which those companies have earned and have a rightful entitlement to keeping, mind you — are not being put to work. Not in an effort to make more money, not to create jobs, not for anything.

Al Jazeera has identified a couple of ways specifically that this type of behavior can have negative economic effects. First, profits that are not recycled through the economy through investment, research and development, or by giving workers raises, slows the economy as a whole. That money is effectively removed from circulation, therefore no one can spend it on products and services.Secondly, the accounting techniques used to limit taxes on profits and income shifts the tax burden onto others, slowing down the economy in other ways.

David Cay Johnston, a Pultizer Prize-winning investigative journalist and the author of the Al Jazeera America piece, crunched the numbers to see exactly how much money these companies were hoarding. By his calculations, corporations now hold $2.30 for every dollar of cash they had in 1994. Not only that, but liquid assets held by big business is equal to all of the money spent by the federal government during 2013, 2012, and part of 2011.

How did it get to this point? Well, the government most certainly does play a pivotal role. A common talking point from business-friendly politicians is that the United States currently has the highest corporate tax rate in the world. While the debate rages on about the effective versus the actual corporate tax rate, any legislation that would seek to either reform the tax code or force corporations to stop using loopholes gets stalled, or shelved completely. At 39.1%, the corporate tax rate does seem a bit high, but historically speaking, it’s actually on the low end of the spectrum. During the 1950s and ’60s, corporations paid over 50% in some cases.

Even so, the recent trend of stashing profits away instead of putting that money to work seems to be a phenomenon relegated to the post-recession world. And in that world, there have been many attempts by regulators to give into commercial interests — by slashing tax rates, handing out subsidies, etc. — in order to spur hiring and get the economy back on track. While the economy looks good now on paper, many people are still struggling. In an effort to get job creators to create jobs, economic gains are going into these companies, and then are expected to trickle down. The problem is that they don’t.

That underlines the fatal flaw in the ‘job creators’ argument. Giving job creators an incentive to create jobs doesn’t come with the guarantee that they actually will.

The real mystery behind the cash-hoarding issue is that while having huge stockpiles of cash may give executives peace of mind, capital that sits idle doesn’t generate any returns. Also, money stashed in overseas accounts isn’t being paid out as dividends to shareholders. So how long can this actually go on before some internal strife within these large companies leads to a change in behavior?

Some analysts feel that the change is nigh. While the economy has a rather robust appearance on paper, from a real-world standpoint it’s still pretty shaky. That is likely why executive teams have been unwilling to pull their cash reserves out and open new factories or invest in research and development, among other things.

“We could be entering a sweet spot for corporate capital spending,” said Kristina Hooper, chief U.S. strategist at Allianz, to CNN. “The economy is improving enough to give corporate executives the confidence they lacked in past years to invest in their businesses.”

Hooper isn’t alone in feeling confident. America’s corporate giants may be on the verge of a spending spree, which would almost certainly give the economy the kick in the pants that everyone has hoped it would get for the past five or six years. “It’s starting to turn,” Russ Koesterich, global chief investment strategist at BlackRock, told CNN. “Hopefully it becomes self-reinforcing growth. Companies spend more, that creates jobs and you get this virtuous cycle.”

That virtuous cycle is the ultimate goal: a truly-robust economy, in which prosperity is being shared throughout the ranks by investing in the working class, and repaying investors. The issue has been that there is no demand that has warranted expanding business operations. But that system only works when everyone is willing to play their part. Demand can be created by giving workers raises, thus bringing up disposable income for certain luxuries. Or investing in research to develop new products, which can get consumers excited and ramp up demand. By putting money back into the economy, it lays the groundwork for increasing business operations in some respects.

Now, all that needs to be done is to get America’s corporate powers to reach under the proverbial mattress and pull out a portion of those liquid assets, and give the economy the shot of adrenaline it so richly needs.