Over the past several years, Costco (NASDAQ:COST) shares have performed incredibly well. This shouldn’t surprise anybody who is familiar with the company’s business model. Costco owns and operates wholesale retailers that cater to the general public. A customer pays a small monthly fee in order to be able to shop at a Costco location. There, the customer is able to purchase items in bulk in the same way that, for instance, a convenience store operator can. By buying items in bulk, customers who have large families, who shop in groups, or who simply use a lot of certain items can save money. Furthermore, Costco also offers good deals on non-bulk items such as televisions, jewelry, clothing, and computers.

However as of late the stock has been stagnant. In fact it has fallen about 10 percent from its December high. Furthermore the company’s net profit margin narrowed to 1.8 percent from 1.96 percent in the first quarter. As a result, profits fell. This has been an ongoing trend for retail companies as American consumers are struggling, although for a company that fulfills a market niche the way the Costco does this is no excuse.

But for Costco this weakness may be a short-term phenomenon, and now that the stock is trading at $115/share rather than $126/share it may be time to buy. This was evidenced on Thursday when the company reported strong comparable sales figures for April. April’s 2014 comparable sales grew at 5 percent year over year, and this figure would have been higher (still 5 percent reportable due to rounding) if gas prices hadn’t been so high and if currencies had remained flat against one another. This caused the stock to jump 2.5 percent on a day when stocks were relatively flat.

On the one hand these numbers are undoubtedly strong, and they reflect Costco’s resilience. In a weak economic environment, Costco has the advantages that dollar stores and Wal-Mart have because shoppers are looking for bargains, and on a per-unit basis Costco has the best prices. Thus, while Costco could see slowing sales growth during a recession, it will likely continue to grow, or shrink less if we experience economic weakness.

Furthermore, Costco will continue to pay and raise its dividend even in a weak economy. The company has a track record of raising its dividend, and it announced just recently that it is hiking its quarterly payout from $0.31/share to $0.35/share. While the dividend is small at 1.25 percent the long term growth potential makes it far more compelling.

At the same time, however, I think a lot of the positives are already built into the stock price. Shares trade at a premium valuation because of investor confidence. However last quarter we saw that even a small hit to margins can seriously damage the company’s profitability because it operates on razor thin margins. This is a serious risk that is specific to the company, and it gives me reason to be concerned.

With equal positive and negative attributes, I would hold off on buying Costco for the time being. There might be some short term trading profits to be had off of the company’s strong April sales figures, but this is the kind of company that will be a long term winner, and so the best time to accumulate is when investors are losing faith in the story. It is difficult to know when this will happen, but it will happen. When it does, Costco will be a strong buy.

Earlier, we analyzed one of Costco’s main rivals, Wal-Mart, which has largely bucked the trend of troubled retail stocks this year. Here’s a recap of why Wal-Mart is one stock worth owning in the long run.

Wal-Mart is the world’s largest retailer. This means that it has inherent advantage versus its competitors insofar as it has the lowest inventory costs — virtually every producer of consumer goods in the world wants to sell their goods at Wal-Mart because of the exposure it gets them. This puts Wal-Mart in a position of power in the asymmetric relationship between retailer and consumer product producer in nearly every circumstance.

Furthermore, Wal-Mart has a bigger and better distribution infrastructure than any retailer, and this is why it is able to offer goods at such compelling prices relative to its competitors.

While investors have been enamored of Amazon given its broad reach in the e-commerce space we have to note that Amazon fails insofar as it is not generating any profits. This wasn’t a problem for investors in the past, but the tide seems to be turning with Amazon shares plummeting in the first part of 2014. 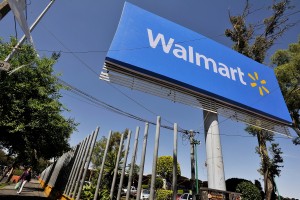 Meanwhile Wal-Mart is one of the better performing retailers even with its profits declining. Investors are expressing confidence in the company’s ability to generate consistent profits over the long run. Furthermore, the company pays a 2.5 percent dividend that it raises on a consistent basis. Over the past ten years the company’s quarterly dividend has climbed from $0.13/share to $0.48/share. That means that Wal-Mart has raised its dividend at an average rate of 15.6 percent per year during this time frame. While I don’t think it will keep this pace up even if it can raise its dividend 12 percent per year, then in ten years Wal-Mart’s quarterly dividend will reach $1.50/share! That’s pretty impressive considering the stock is trading at just $77/share, and it makes the shares very compelling for investors looking to generate future income for retirement.

Ultimately Wal-Mart is a slow and steady business, and it lacks the glamour of other retailers. But this is a case of the tortoise beating the hare. Wal-Mart is the tortoise, and I think it is a stock worth buying on weakness.

Disclosure: Ben Kramer-Miller has no position in Costco or in any of the stocks mentioned in this article.