Could Microsoft Give Your Portfolio a Jolt?

With shares of Microsoft (NASDAQ:MSFT) trading around $44, is MSFT an OUTPERFORM, WAIT AND SEE, or STAY AWAY? Let’s analyze the stock with the relevant sections of our CHEAT SHEET investing framework:

Welcome to Microsoft, Nokia (NYSE:NOK) employees! You’re out of a job! So came the message today as Microsoft announced plans to fire up to 18,000 people over the next year. The bulk of the layoffs, about 12,500 people, will come from the Nokia devices and services business that Microsoft officially acquired in April. Most of the rest of the firings will affect people with overlapping jobs, furthering new CEO Satya Nadella’s pledge to create a leaner, meaner, faster-moving organization. Grrr. It’s not easy firing this many people–especially when you’re Microsoft, which hardly ever fires anyone, and when you’re dealing with Finland, which also has a thing against firing people. The company did it with two memos and a press release. The first memo came from Nadella, who explained how the layoffs fit into the strategy outlined in his memo from last week. The second came from Stephen Elop, the former Nokia CEO and now Microsoft executive, who never really managed to revive Nokia’s business, delivered the pride of Finland into the clutches of Microsoft, and must be feeling some measure of guilt about all this. (Right?) A staggering 40,000 Nokia employees had already lost their jobs over the past few years, as the phonemaker transitioned from global market power to Harvard Business School case study. The only large layoffs in Microsoft’s history occurred in 2009, when about 6,000 employees were let go in something of a face-saving gesture after the Windows Vista debacle and the company’s complete whiff in mobile.

Microsoft stock has been trending higher over the last couple of years. The stock is currently trading near all time highs and looks set to continue this path. Analyzing the price trend and its strength can be done using key simple moving averages. What are the key moving averages? The 50-day (pink), 100-day (blue), and 200-day (yellow) simple moving averages. As seen in the daily price chart below, Microsoft is trading above its rising key averages which signal neutral to bullish price action in the near-term. 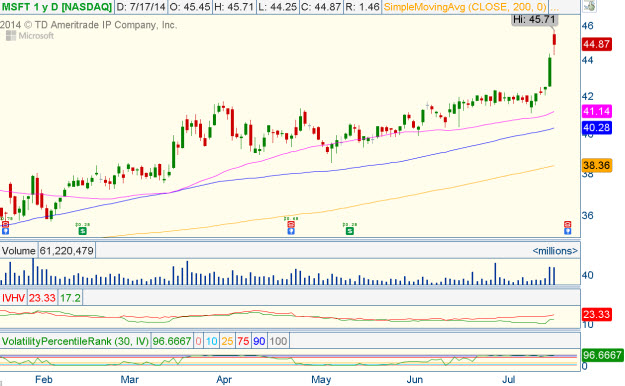 Microsoft has seen mixed earnings and increasing revenue figures over the last four quarters. From these numbers, the markets have been pleased with Microsoft’s recent earnings announcements.

Microsoft is a technology company that provides valuable software products and services to consumers and companies worldwide. The company announced plans to fire up to 18,000 people over the next year. The stock has been trending higher over the last couple of months and is currently trading near all-time highs. Over the last four quarters, earnings have been mixed while revenues have been increasing, which has left investors pleased. Relative to its peers and sector, Microsoft has been a relative year-to-date performance leader. Look for Microsoft to OUTPERFORM.