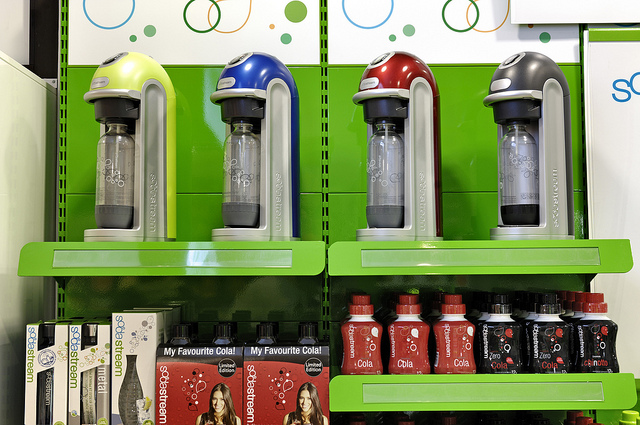 $GMCR – Jagdale raises his target on Green Mountain to $150/sh this AM – up from $100. Downgrades Sodastream (SODA) to Hold.

Coke’s announcement on Wednesday caused significant stock turbulence because the new Coke-Green Mountain deal signals that those two parties could be poised to benefit in the fast-growing at-home beverage industry, while SodaStream could be in trouble.

Thanks to limited competition in the at-home beverage market, SodaStream has reaped significant success with its carbonation machines that crank out environmentally friendly alternatives to Coke and Pepsi (NYSE:PEP) products. However, the Israeli company is about to get some new competition from Green Mountain once the latter launches its “Keurig Cold” machine in its 2015 fiscal year, and now Coke will be in on the rivalry, too.

According to ABC News, Green Mountain’s fiscal-year 2015 begins this fall, and it’s then that the company will add a cold machine to its already popular coffee machine lineup.  The Waterbury, Vermont-based coffee brand says the machine will let people make sodas, sports drinks, and other beverages with the touch of a button, and it won’t require CO2 carbonation cylinders that need to be replaced. SodaStream’s machines do, and as a result, many have called the contraptions inconvenient and a barrier to the company’s ultimate potential.

Even though Coke’s partnership with SodaStream wasn’t announced until Wednesday, Coke and SodaStream have long been battling it out over a space that SodaStream currently monopolizes but Coke is ready to make a splash in.

Consumers may be turning away from sugar-laden beverages, but more and more people are showing an interest in at-home brews, and the battle is just beginning between Coke and SodaStream to determine which company offers the better product.

The rivalry between the two firms came to a head this month, when SodaStream complained that its Super Bowl commercials were being censored on account of their unfavorable mentions of competitor Coke, but Fox stood its ground and didn’t let SodaStream call out its competitor in its expensive ad.

ABC News reports that SodaStream now has bigger problems on its hands, as Coke and Green Mountain said they have signed a 10-year agreement. With that deal, Coke will acquire nearly 16.7 million Green Mountain shares. Green Mountain will use those proceeds to buy back stock to finance expenses related to Keurig Cold.

Consumers have long shown an interest in brewing their own bubbles, and they might be able to do so soon via a machine partially owned by Coke. The cold machine will allow consumers to make their own drinks at home possibly using Green Mountain and Coke pods.