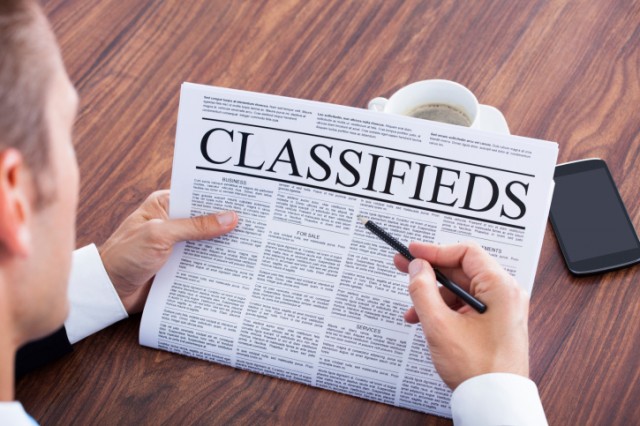 Continuing a well-established trend, fewer Americans filed applications for unemployment benefits last week, according to the Thursday report compiled by the Department of Labor. Dropping by 2,000 to a seasonally adjusted 312,000, jobless claims — which serve as a proxy for layoffs — highlight the fact that emerging unemployment is returning to acceptable levels.

Or, in other words, fewer Americans are being laid off, even if the nation’s long-term unemployment level remains elevated. Current jobless claims levels fall within an acceptable range; economists say any claim figure below 350,000 indicates moderate job creation. And according to Moody’s Analytics senior economist Ryan Sweet, recent claim figures suggest the United States will “have another decent gain in non-farm payrolls” this month. 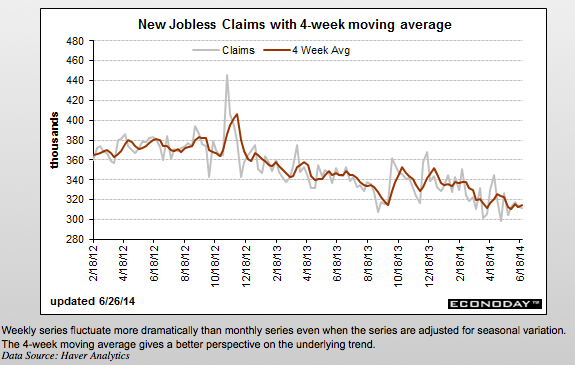 To Barclays economist Cooper Howes, the numbers provided “encouraging evidence of a further improvement in the separations side of the labor market” in the second quarter, after what was a volatile start to 2014. While the long-term trend in jobless claims is one of decline, examining weekly numbers shows progress can be rather uneven. Last month, Americans filed the fewest number of first-time applications for unemployment benefits in seven years, meaning the last time jobless claims — and by association, emerging unemployment — fell so low was before the financial crisis and subsequent recession. But in the following weeks, jobless claims rebounded from the 297,000-claim low, evidence that claims have been unable to stabilize below a weekly rate of 300,000, as RBS Securities economist Omair Sharif recently noted. Claims have not remained at 300,000 consistently since the recession began in late 2007.

Further evidence of volatility was provided by the Labor Department’s four-week moving average. Jobless claims provide the first look at the employment situation for any given month, but since the weekly figures can be volatile, economists use the four-week moving average to understand wider trends in employment, which are far more telling of labor market health than weekly readings. While weekly claim numbers dropped, the moving average rose 2,000 to 314,250. And the number of workers continuing to draw unemployment benefits jumped as well, climbing 12,000 to a seasonally adjusted 2.57 million in the week ended June 14. Continuing claims — reported with a one-week lag — have fallen by approximately 400,000 over the past twelve months.

But Thursday’s report appears to jar with other economic narratives. While unemployment data released by the Department of Labor shows the healing of the labor market continues its slow progress, new data indicates the United States’ first quarter was worse than previously estimated. Wednesday brought the news that the United States economy contracted by a greater percentage than previously estimated. The Department of Commerce’s released its second and final revision of gross domestic product — the broadest measure of economic activity — revealing that economic growth in the first quarter had slowed to a 2.9 percent annual rate. And that pace represents the fastest decline in GDP growth since the 5.9-percent drop recorded in first quarter of 2009 — during the Great Recession. At least one economist even termed the quarterly GDP growth “recession-like.”

Earlier estimates first put GDP expansion at 0.1 percent and then at a contraction of 1.0 percent. With such sizable downward revisions, it bears investigating the impact of the first quarter’s lack of economic growth, which slowed the labor market recovery. Economists contend that the largely weather-driven contraction of GDP was not the beginning of a new trend. The year began with colder-than-usual temperatures that impeded hiring, kept consumers at home, disrupted manufacturing supply chains, and blanketed construction projects with snow. Weak hiring further disheartened job seekers, who have dropped out of the labor force in large numbers in recent months, and contributed to labor market slack, which has left workers with little leverage to push for wage growth; limited wage growth and ongoing economic concerns have limited consumers’ discretionary spending to necessary items, particularly durable goods like cars and auto parts; and the housing market suffered from both the cold weather’s disruption of construction and home buying as well as increasing mortgage rates.

Even as the Commerce Department’s calculations of first-quarter GDP continued to be downwardly revised, second-quarter economic reports spoke of greater second quarter growth as pent-up demand was released by warmer weather. Hiring rebounded, surpassing the important benchmark level 200,000 jobs per month, which Federal Reserve economists say is an indication of labor market improvement. “It’s a scary report,” Bank of Tokyo-Mitsubishi chief financial economist Chris Rupkey told Reuters of the GDP revision. “It sounds worrisome, but keep in mind job growth is running 200,000 each of the last four months, so we aren’t just whistling in the dark in our optimism over the outlook.” In fact, economists’ estimates for second-quarter economic growth range as high as 4.0 percent, which is impressive given that the “new normal” of GDP growth is below 3 percent.

However, the Federal Reserve has lowered economic growth forecasts for 2014 to between 2.1 percent and 2.3 percent, down from its previous prediction of nearly 3 percent. And the fact remains that middle class Americans are much further away from recovering economically.

Yes, investors have generally enjoyed solid returns since the end of the Great Recession five years ago. And in 2013, the stock market underwent the broadest rally since at least 1990. Standard & Poor’s 500 closed on December 31 at a record-high 1,848.36, leaving the index at a 30 percent annual gain; the Dow Jones Industrial Average closed a record-high 16,576.66 and posted a 26-percent yearly gain; and, the Nasdaq closed at 4,176.59, with the index gaining 33 percent over the year. But, of course, stock market gains boost wealth for a small percentage of households. As a study conducted by the Russell Sage Foundation found, “through at least 2013, there are very few signs of significant recovery from the losses in wealth experienced by American families during the Great Recession.” And that loss of wealth was not distributed equally across all income brackets of the U.S. population, meaning wealth inequality greatly increased over the past decade. For America’s top earners, the Great Recession was only a “temporary interruption in wage growth,” but for the remainder of the population, median household wealth is well-below 2003 levels.

Hiring and job creation plays a complicated role in the recovery of middle class America and in the recovery of the American economy. For a majority of the past two years, jobless claims have been charting out a downward course. But the problem for many months has been job creation, not layoffs. It is important to remember when analyzing jobless claims numbers that the numbers are a leading economic indicator, and therefore only offer indirect clues about the pace of hiring — the other piece of the labor market story

The Labor Department’s May Employment Situation Report told the story of an economy and a labor market that are healing. Yet there was also evidence of deep scars.

The jobs report showed that U.S. employers expanded payrolls by 217,000 jobs last month — a slightly greater gain than the average of 214,000 jobs added per month in 2014. May marked the fourth consecutive month in which job creation surpassed 200,000, making the past four months the longest stretch in which payroll additions remained above that key benchmark since the late 1990s. Now, “people will start accepting that the labor market is working better than people think it is, IHS Global Insight chief U.S. economist Doug Handler told The Washington Post. And indeed the labor market has achieved an important goal; May’s employment gains mean all the jobs lost during the recession have been recaptured, leaving employment at an all-time high of 138.4 million people. Of course, in the five years of the recovery, the U.S. population has grown, and so the percentage of Americans that are employed remains smaller than before the recession began. According to an analysis conducted by the liberal Economic Policy Institute, more than 7.1 million jobs need to be created to fill that gap. And that reality indicates to the think tank’s economist Heidi Shierholz that the United States is “far, far from healthy labor market conditions.” Plus, the labor force participation rate remains very low by historical standards, long-term unemployment is still elevated, and many workers are underemployed.

The current state of emergency unemployment may appear at odds with the economic conditions of the first three months of the year, and even more at odds with the difficulties facing middle class and low-income Americans. But just because the labor market is making measurable progress, it does not mean that all Americans are benefiting or all employers no longer worried about the economic recovery.